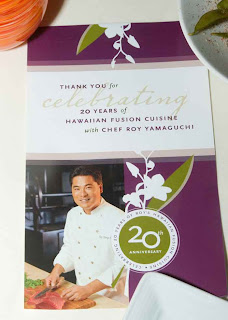 Roy Yamaguchi visited Naples Roy’s on May 23, celebrating Roy’s 20th year of operation. From a single Honolulu Roy's in 1988, to 37 Roy’s world-wide branches in 2008, he’s set a high standard for all restaurants to follow. His Hawaiian Fusion Cuisine is a influenced by mix of Hawaiian, Japanese, and various Pacific Rim cuisines, combined with a French saucier’s magical talents. Featuring Hawaii’s unique fish and vegetables, combined with local sources, the mix is intoxicating!

Roy Cooking "On the Line" Whether you are at the “bar” directly in front of the chefs at the open kitchen, or at a booth, service is attentive and smooth. 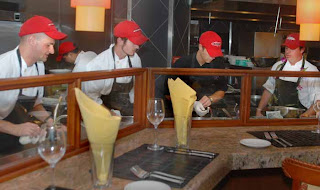 I’ve eaten at the Kauai Poipu and the Bonita Springs’ and Naples’ Roy’s Restaurants, and the quality of wait staff and dining is consistently high. I’ve met my share of celebrity chefs, and Roy is a relief, devoid of tinny “super chef” braggadocio. There’s no inflated ego. He is warmly welcoming, yet quiet and reserved; very alert and calm. His staff clearly admires his overall presence and humbleness, “on and off stage”. As one waiter noted, “He cares, he really takes care of everyone else”. 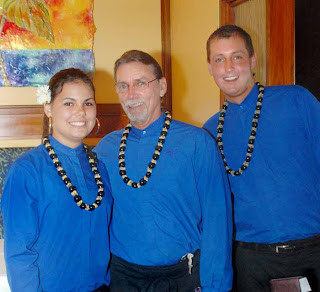 This celebration, twenty years in the making, combined Roy’s recipes from 1988 and 1999, as well as current 2008 recipes. These were paired with, ta-da, a personal visit from Gary Branham, and his Branham Estate wines, for grand total of only $85! Top that! 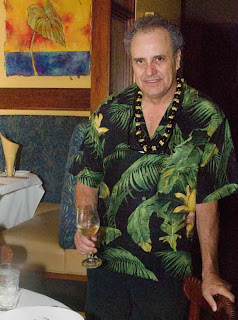 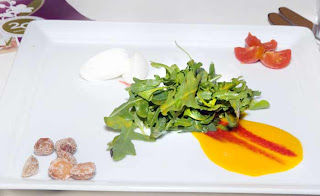 Chefs at the Open Kitchen 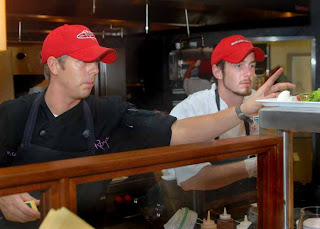 The 1998 first course was a Kona Crab “Cake” of luscious fresh crab with scant filler, bound in a ring of thin, crisp round slices of Marinated Daikon (a Japanese radish), with a Pineapple-Vanilla Froth, and pink and green micro sprouts, AKA “Micro Amaranth Greens”. Paired with the wonderfully light, crisp 2006 Branham Chardonnay, the Crab “Cake” had an additional surprise, a light sprinkle of crunchy Hawaiian salt crystals on top, setting off the fresh crab’s natural sweetness. 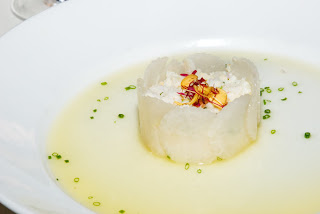 Micro Greens, Reds and Yellows on the Crab "Cake" 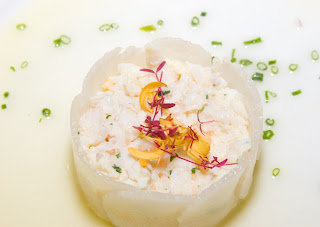 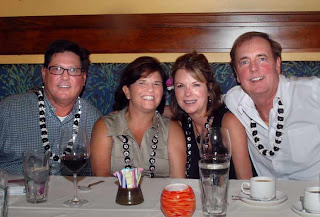 The 1988 Shiso Seared Hawaiian Opakapaka is served over a Lobster and Shrimp Shu Mai, or Chinese dumpling, and a Vegetable Stir Fry, with a Branham Pinot Noir Coconut Curry Reduction. The fish, a Hawaiian pink snapper with more of a swordfish texture, was seared and tender, bordering on being firm, yet still succulent. I only wish Roy served the Opa, or Moon Fish, my absolute favorite of his fish, or his Butterfish! The 2005 Branham Pinot Noir was a perfect match, bringing out the seared goodness. I’ll pick up a bottle locally, it’s that good with fish, or lighter-spiced meat dishes. 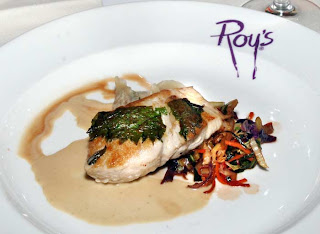 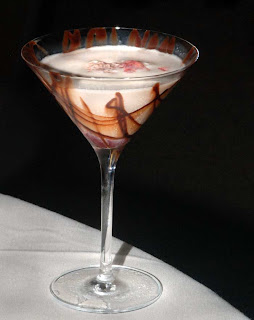 Our server, Michael, anticipated requests, and is a gentleman with a good sense of humor 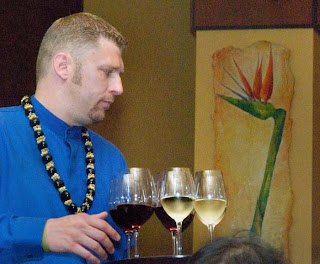 The star for me was the 1988 Teppanyaki Seared Hudson Valley Duck Breast, with Whipped Okinawa Potatoes, and an earthy Black Bean Dragon Sauce. The filet, or half duck breast, (called magret if the bird has been fattened for foie gras as well) was rich, tender, and lean, with just enough of a rim of seared fat for taste. The full bodied 2005 Branham Jazz wine, a quartet of Zinfandel, Petit Syrah, Syrah and Cabernet, matched well, with good tannins, and dark berry and peppery notes. 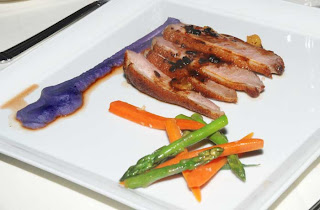 Roy came round to the packed tables, and graciously signed autographed menus and some copies of “Roy’s Fish and Seafood, Recipes from the Pacific Rim” Book, his beautifully illustrated third book. Well worth a look or purchase. One admirer, watching him interact with his guests requests, said “I thought he was cool before, and now I’m his greatest fan!” 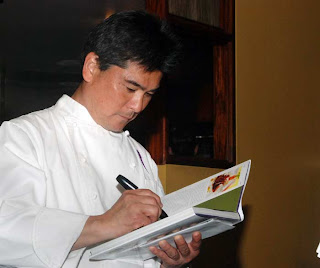 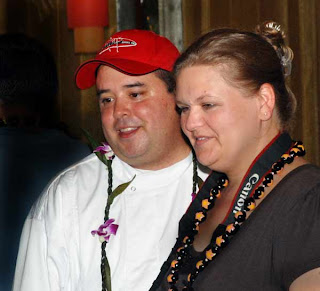 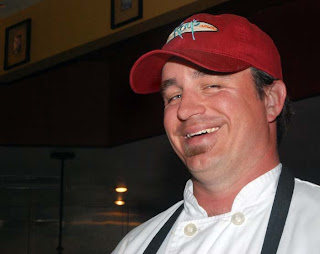 Mark Anders, Joint Venture Partner, with Jeannie Lee, in the spirit of things! 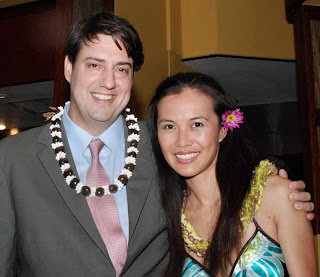 The Dessert Trio of Decadence features a rich Chocolate Torte, with a scoop of Pistachio Ice Cream with fresh nuts admixed, on the side. The very subtle Coconut Haupia, in a thin chocolate cup, got lost among its’ stronger flavored siblings. Coconut based Haupia is mild, thickened with arrowroot or cornstarch to be firmer or stiffer than a usual pudding. It is usually molded and then cut into blocks, with numerous variations, just in Hawaii alone. My favorite dessert of the trio (or quartet, but who’s counting?) was the sweet and gooey Miniature Pineapple Upside-Down Cake, topped with crunchy nuts. A delight-I could get a few of these as a main course next time!! As one patron said “It’s unique to Roy’s, you just don’t get it anywhere else”. 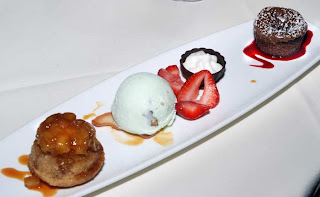 Roy's is very family friendly. Roy’s Keiki, or Child's Meal. is really a two courser plus dessert, for only $12, that this kid (me) would be happy to have! Starts with Assorted Vegetable Crudité & Grilled Jack Cheese Quesadilla, then has a choice of one of the following four: Pasta of the day, Crispy Chicken Fingers 'n French Fries, Grilled Salmon with Steamed Rice and Vegetables, or Broiled Short Ribs with Mashed Potatoes and veggies. This is topped off with a Vanilla Ice Cream Sundae dessert. Bring it on! 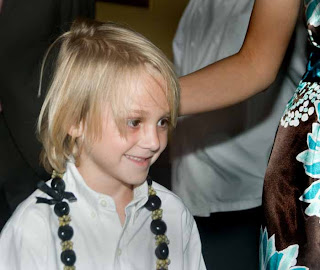 Wow, what wonderful food! I have yet to visit Roys in Sarasota...but soon...need to line up babysitter!

Javier cooked up a delicious feast for us and did it with suave and ease. He is a star in the making!

I'd love to say I had a wonderful dinner here, but they turned me away. I'm a regular patron of Roy's in downtown Los Angeles and in Rancho Mirage, so I was excited to find it while visiting Sarasota.

7 pm, Saturday, December 27, I walk into Roy's, alone, and ask for a table for one. From where I'm standing I see at least fifteen empty tables and about three filled tables. The hostess tells me they don't have any room. I tell her I see a room full of empty tables. She responds that in a couple minutes they will all be filled with people who have reservations. Reeeeally?

"So you tell me you are going to send away one client, probably permanently, in favor of a bunch of people who aren't even here?" She fails to see the irony nor the long-term wisdom of her decision, and insists I cannot eat there.

On my way out, I see a car at the valet stand. I stop to talk with the driver. Told him if he didn't have a reservation, they would just chase him away. He was very happy to take my advice, and he and his companion drove away.

Though I'll be visiting Sarasota regularly, Roy's is on my permanent list. When I left that night, I discovered a fantastic place, Michael's on East. I had an excellent dinner there.