I've enjoyed Creole cooking at friends homes and at Naples' Paradise Haitian-American Take Out Restaurant, so when friends noted Bon Gout's opening earlier this month on the East Trail, we came to check it out at 8 pm, this past Friday.

It's a simple place, nothing fancy, in a dwindling strip mall next to a Radio Shack. Much like a simple place you might have seen in photos of 50's spots, it has a few booths and more tables, and can seat perhaps 50 people. When we were there, there was a table of 3, and a steady parade of people coming and going, with bags of take out. The owner said they were primarily a catering spot, and opened the restaurant portion to maximize use of the property.
The menu looked great, with Chicken in sauce ($9), Goat meat with sauce (12), Veggie plate (10), Oxtail (10), Conch saute (14), Salted fish (13) as regular items. There was a special sit down Family Dinner for four people, for $32, including choice of 3 from (chicken, goat, veggie, turkey, fried pork), with pork, and fried goat. Such a deal!
Since it was a Friday, the menu noted the Friday- Taste of Haiti offered Fried fish (11.50), fried pork (7.50), fried goat (10.50), fried chicken (6.50).
We ordered the oxtail and goat, and were told they only had Fried pork (7.50) and chicken in sauce (9). At 8 pm on a Friday night? Nothing more? Not even the Family Special?
"No, that's all we have left tonight."
We asked our lovely waitress to give us one of each, so we could taste the two different preparations. A mixed salad came, decent, however some leaves had seen better days. When she brought our food, she brought two orders -of the same fried pork! Help! With only our two-top and a three-top dining then- just two tables, it shouldn't be hard to mess up an order for one each of only two things ordered-pork and chicken. Besides, they were the only things available, anyways! We started on the order of fried pork. It was nicely spiced, and somewhat overdone, compared to what we've had at other Creole places. 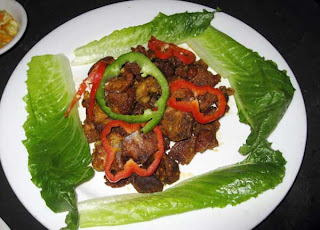 I still liked its warm, rich spicing and crisp texture. The romaine lettuce on the plate was wilted. We liked the generous side of rice with lima beans.
The chicken finally arrived, 20 minutes after the pork. 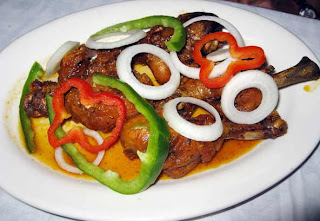 The presentation was pretty enough, however the order, legs and thighs, was overcooked, and dry. It was fried, then the crust was wet with a mild sauce. Reminded me of institutional food I had as a kid in public school cafeterias.
Two of our friends ate there 3 days later, at 7 pm on Monday, not knowing we were there before. Same menu, same waitress, same routine. After they ordered goat and oxtail, the waitress came back 10 mionutes later and said all they had to offer was pork that evening. When asked why the generous menu offerings, and only one item actually available at 7 pm, they were told "It's a long story". Hungry, each ordered a pork plate. Twenty minutes later, the waitress arrived, with only one pork plate, and one set up of knife, fork and spoon!! No, no , no!! And again, people were coming and going with take out of some sort during their meal. Is this any way to run a restaurant? Just what is in the popular take out boxes, anyways?! I wanna see!
The menu mentions they cater weddings and anniversaries. Hmmmm. Not mine. Don't think I'll even join the mysterious line for boxes of take out. Give it a few months, and things should change, for better or worse. I think I can predict this one's outcome.
Bon Gout Creole 3749 Easat Tamiami Trail, Naples 239-234-6935
Posted by Ivan Seligman at 7:17 PM

hi ivan,
ive experienced some of those mysterious "carry outs" while trying to eat my dinner at work in the break room. the whole fish was the most interesting. there was indeed a whole fish "head on ", battered and deep fried. the smell of ammonia permeated the room as the white plastic lids were opened. ive smelled bait that was less pungent. whewwww!! the meal also came with the famous haitian rice, brown in color , i beleieve its called jou jou? also served was some lettuce , onion and tomato as a small salad and a mystery sauce in a little container. one thing that did amaze me was the size of the deep fried plantain slices, they were as big as my head. where can we find a press to make them? ask the locals where they order from.
nancy d

Thank you for the "heads up" on the "head on" fish!

I've made my big tostones by carefully whacking the first- briefly fried plantains with a cast iron pan. Trick is to put several of the low temperature fried plantain pieces together, to make the one big tostone, then fry it again, at a higher temperature to make it crispy!