We arrived at Cibao Grille, sat at a table next to a large family’s dinner, and before long, they welcomed us like long lost cousins. We were not the only one's to feel so welcomed at Cibao. Being warmly welcomed by staff and by other "regular" diners; it's just part of Cibao's charm. Proprietor/owner Pedro later echoed the same, saying "Everyone who visits us (soon) feels like they are part of our family". 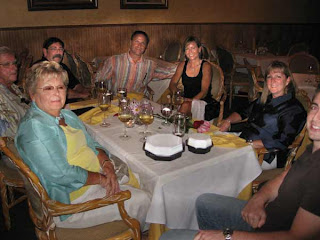 Cibao is a North Naples hidden gem, where families come back weekly for the food, warm ambiance, and friendliness of family owners Pablo and Pamela Nolasco covering the “front of the house”, and Johnny’s Caribbean accented cookery.

It’s a neighborhood bistro, an intimate watering hole for regulars’ families and friends for having weekly dinners, rather a trendy hot spot, or one on the “let’s try that one next” list. This is not for the “half-priced special” or the “happy hour” seekers. Tourists do not stumble in here, fresh from the beach, in damp shorts and sandy sneakers. Tucked away just off 41, on the south side of Neapolitan Way, it is west of Kinko’s and east of Sunsplash, easy to miss. Don’t miss it.

The food is familiar to most Americans, with a twist-there’s a touch of Caribbean spices, Doninican Republic style, that gives a subtle pleasant change to old favorites, and to some new dishes as well. Johnny certainly mastered cuisine at St. George & Dragon before Cibao. Pedro is well known from his time at Hideaway Beach on Marco Island. When we were there, a well known Naples family had 16 members for dinner at several tables.Regulars at other tables recognized them and said “hi”. We sat at a two-top table next to them, watching three generations enjoy the food, and, after our dessert, some leaned over and said hi to us, (they didn’t want to disturb us earlier, as they thought we might have preferred an uninterrupted romantic candlelit dinner). We happily welcomed their polite overture- they were so kind to share their world with us. One said "here, it's like having dinner with friends and family" Pedro later echoed the same, saying "Everyone feels like they are part of our family".

The Maine Lobster Ravioli, (9) (half portion- below) a Maine Lobster and Chive Filled Ravioli with a Roasted Red Pepper Crème was a delight. We said we’d share it, and when it came, they had already made it on two separate plates, each with two large, tasty ravioli, strips of peeled red pepper, and a delicious Crème sauce. 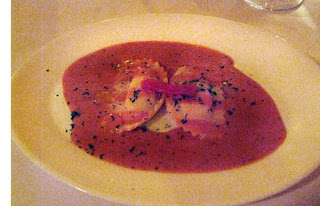 You could easily taste and spot the lobster! I ordered a glass of white wine, a nice Las Brisas Sauvignon Blanc, and said I’d give my dining partner a sip (not all my dining partners drink). The wine came, split in two glasses, as well, with a few sips in my partner’s glass! We were amazed at the extra steps they took to give us separate plates, and separate glasses-we didn’t think to ask-and they did. Nice. Other shared their stories of just how attentive, considerate and caring Pablo and Pamela are, in so many little ways. 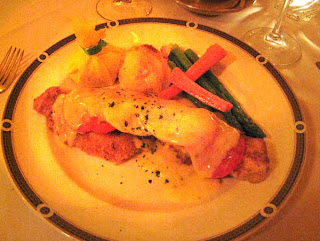 You just don’t find fresh pike in Florida too often, either! It was fresh, cooked till just tender, a good sized portion, and covered with artichoke hearts, tomato slices, and a well prepared Béarnaise sauce, with potatoes au gratin and asparagus. Each mouthful was a sensual marriage of flavors. (It really looked much better than my “candle light shot!) Unlike fish at a recently reviewed "trendy" place, Cibao cooks fish properly- the first time. 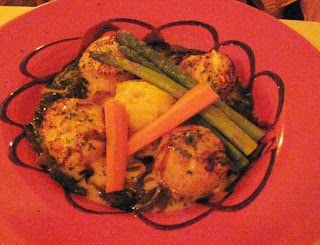 The scallops were cooked just right, nicely seared to bring out the scallops’ sweet taste, and the balsamic caramelized onions, au gratin potatoes, asparagus and carrots were a very nice touch.

For dessert we looked at the Key Lime Pie (5.50), double trouble chocolate layer cake, and the New York style cheese cake, and decided to split a Caramel Flan (5.50) (half portion below). 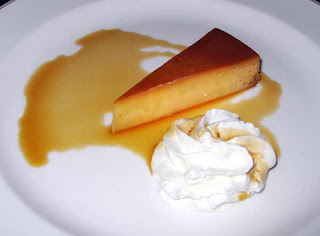 It came to the table, a half portion on each of two separate plates, with a delicious dense, firm consistency, bathed in lightly spiced caramel sauce, with piped freshly whipped cream. Flan lovers, we savored every rich bite, and were very happy with the good sized portion.

Cibao also donates hot meals to the volunteers at the Neighborhood Health Clinic several times a year. Turns out, the doctors, nurses and other hard working staff don't have time for dinner between leaving work and arriving at the clinic, so Cibao, Aurelio’s, Brio, Campiello, Noodles Italian Café, Naples Roy’s and other fine restaurants pitch in, and feed 30 volunteers at a time. The Clinic, founded by Dr. Bill and Nancy Lascheid, takes care of Collier County’s lower income patients. It gives personalized high quality care, and charges very little, based on a very affordable sliding scale. The docs, nurses and much of the staff volunteer their many hours. Caring donors generously financially support the overhead, Naples Community Hospitals helps tremendously, and thus Naples takes care of its own. 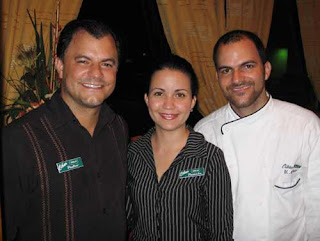