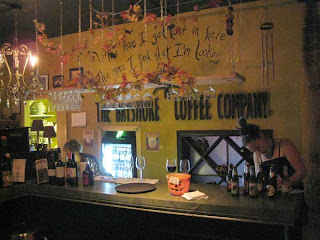 The Bayshore Coffee Company has been a hidden musical gem in Naples for several years. It’s a fun place for breakfast, lunch or dinner, with sodas, wines and beers. In the evenings, depending on the musicians, the often packed crowd ranges from 20’s and tattoos, through 30’s and Beemers, to 50’s and ups with diminishing IRA's.

The setting is a small intimate coffee house, with the band/entertainer usually by the front piano. Facing that are soft couches 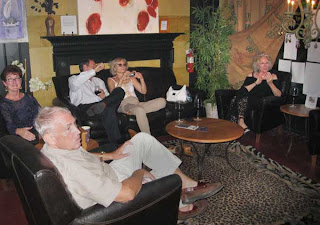 and comfy big chairs. Toward the back are tables and chairs, with food/beverage by waitstaff, or walk up to one of two counters.

This is warm, welcoming and homey, no way around it. Its charm is in it’s sayings on the earth tone walls, the fact that little matches, 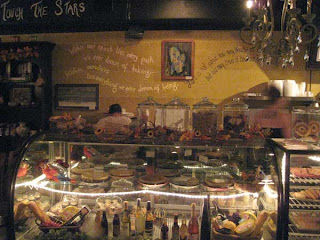 and a packrat’s accumulation of interesting bric-a brac.

Park in the back, and come in early for a dining table, or later for general seats on an entertainment night. We came famished, and specifically for light jazz-to experience Kathryn Taubert-and went away well fed, on the tasty food, and nourished by Kathryn’s warmth, and wonderful voice. The musicians among us noticed the professional quality of her band-Woody Brubaker on keyboards, sax and vocals, 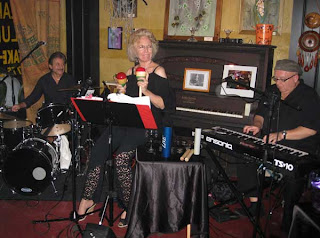 and Joey Dio, on drums and vocals. When we walked in we heard Satchmo’s (Louis Armstrong) unmistakable voice, and realized Joey was not lipsynching it-he was singing just like Satchmo! When professional musicians say “they got chops” of other musicians, they are tops.
Food is largely ample sandwiches, panini style, and some fresh salads. We favored the vegetable panini (8.25), and the chicken salad (below). 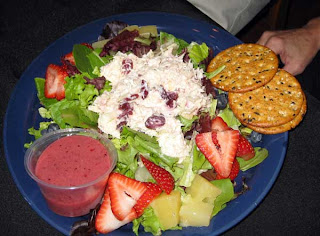 The chicken/portobello panini (8.25)was good sized, a little dry, but ok. A very good glass of the house Merlot is well recommended at $6.

Kathryn Taubert started to sing, and the audience hushed, to hear every word’s inflection. Hers is a warm, mezzo voice you’d pay a high cover charge for in New York or LA. We are lucky to hear her for $4. She has two CD’s out, with the acclaimed 2008 CD: "Somewhere In Time", and is going strong. She even writes fitting lyrics to music that no one else has thought to do. A tall attractive woman with a warm friendly manner, she visited with the musicians at our table during a break, and made several new fans. Later, a local realtor sang with a great voice, 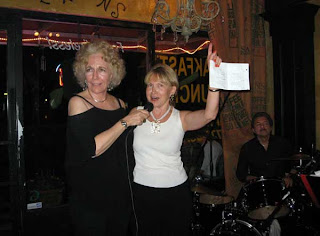 and even Tony Pulera, of Opera Naples' Rigoletto, sang some songs. 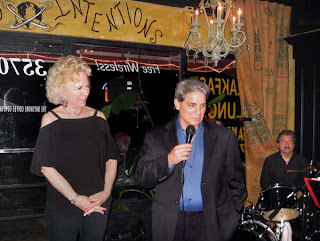 Saves us a plane ticket to Vegas, to hear similar quality.

Kathryn's sung with many of Florida’s top musicians, and you can find her at high end concerts, posh New Years celebrations, and even scuba diving! She’ll next be at Bayshore Nov 29th and Dec 27th, 2008. Check her website for 2009. Going to Beverly Hills in 2009? She won’t tell you, but I will, that she has been nominated for the award as Best Performance by a Female Vocalist in the Latin/Afro-Cuban Jazz category for the four Latin songs on her 2007 CD, "Where Can I Go Without You?" The cost for this Beverly Hills Hilton swanky event is $250, so the $4 cover at Bayshore is a STEAL!!! Check out her voice and site at: http://www.kathryntaubert.com/home.html .

Bayshore Coffee Co. has many different artists appearing each month, so call and find out who’s playing. Have a sandwich and drinks, and relax!