Camilla Eastern European Market - It Only Gets Better

Camilla is a magnet- people come to check it out, and just keep coming back! It’s as educational as it is a source, a gateway, to tasty treasures. It’s not too hard to find. On the south arm of the U shaped Liberty Bank Plaza, across 41 from Outback, it’s the second store in off of US 41. 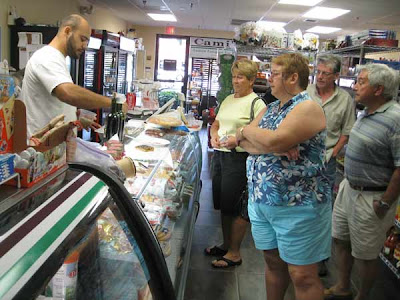 It’s unique in offering all sorts of Eastern European foods. The regulars tell me they return because Camilla, named for the owner’s 6 year old daughter, stocks the best quality items, made fresh, or imported, at very good prices. In the hour I visited, the clientele was a friendly mix of appreciative Midwesterners, people clearly from the former Soviet Union, and a smattering of people like me, that just seek good food, wherever it’s found.
Co-owner Aziz Obidov, alternatively speaking fluently in English, Russian and Uzbekistan dialects with 8 customers around the deli case, is a culinary encyclopaedia. He loves what he does, and his enthusiasm is contagious. 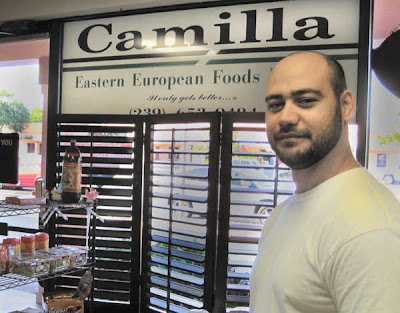 He described the $4.50 Somsa’s ingredients so well-it’s a pastry wrapped lamb, beef, onions and spice mix in a rather pregnant sized knish or pasty-I bought and tried one on the spot! 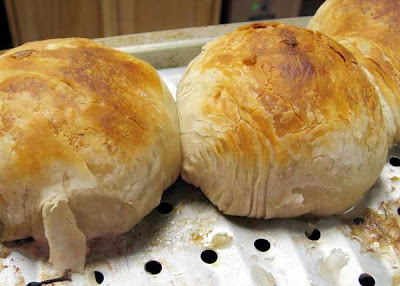 Heated, it’s luscious, lunch sized, and succulent juices happily drip down your cheeks, as you smile then go for another bite. 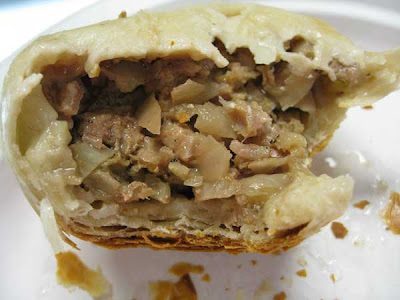 As is, or with mustard, my enjoyment of it drew approving smiles from a Russian couple. Some days you may meet Azia’s wife, Madina Khilalova and Camilla- this truly is a high quality Eastern European Mom and Pop store.
Get the grand tour with Aziz, in between other customer’s visits, learn about the former soviet Union’s region’s history and cuisines in depth, shelf by shelf, delicacy by delicacy. There were 15 shoppers in little over an hour, making beelines for familiar products, like sampling 99 bins, each housing different wrapped varieties of Russian candies for ~$4.99 a pound. The peanuts coated with sesame seeds are a favorite, and there’s two types of dried apricots, the “regular”, and another that’s “bone dry.” 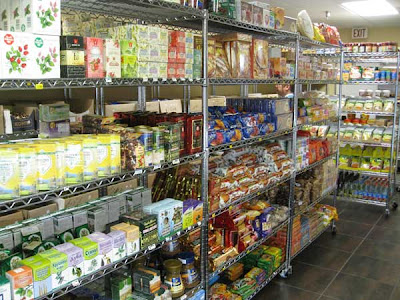 Have a small cheese cake, frozen, with a long cookie on the top. 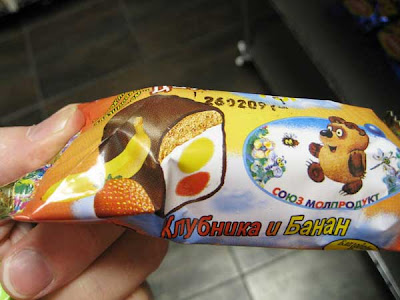 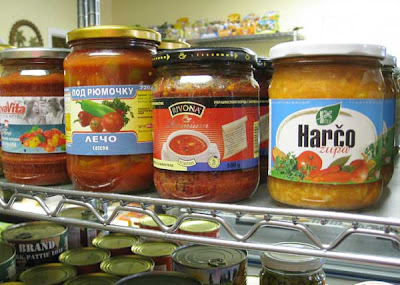 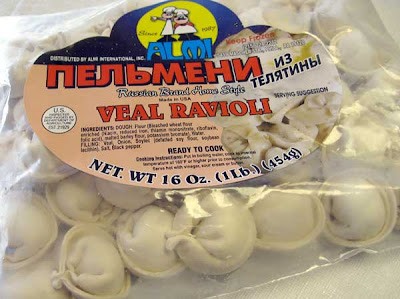 There are over a dozen frozen Eastern European specialty breads. 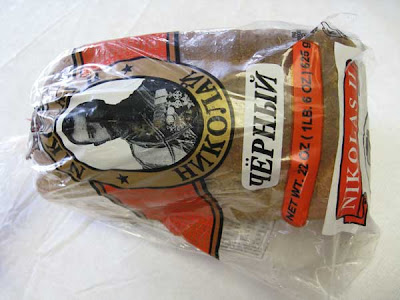 One woman said, “I’ve not tasted this bread in over 30 years, since my grandmother made it. It’s as heavy and rich as she made it, too!” 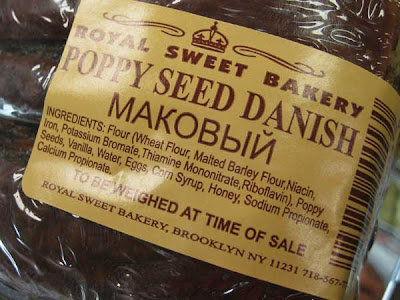 There’s even Russian butter, and Russian soft drinks like Kvas, 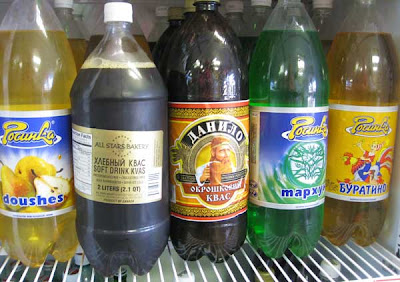 their “Coca Cola”, and various fruit and herb flavored drinks.
Quite a few of the items are Kosher, with a “u” in a circle, this particular mark adheres to a higher quality in processing, supervised from start to finish. Other items are Halal. (Jewish Kosher is similar to, yet not the same as Muslim Halal. Both religious Jews and Muslims avoid any pork products. Both have similar rituals for humanely preparing meat. Few wines are Kosher. Religious Muslims avoid alcohol. Both religions do not eat birds of prey or blood, and forbid eating animals that have been found dead.)

In another freezer is a half sturgeon, rack of lamb, basa- a Vietnamese catfish, and other items, already marked with purchaser’s names-people call in their orders, and pick up the goodies!
Try the deli meat counter, and then the cheese area. 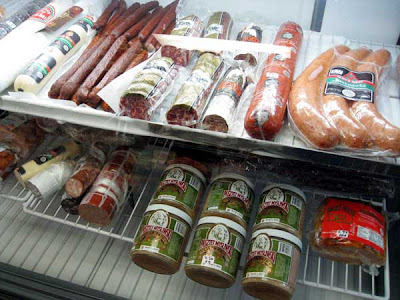 I like the $1.99 Tulski, a gingerbread with jam in the center. Crunchy, gingery, and a touch of sweetness-others put some in their bags. 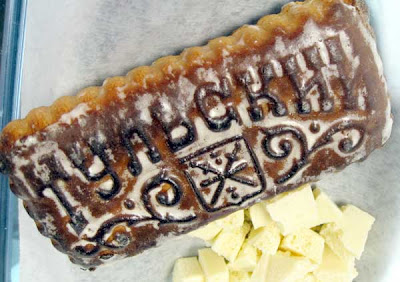 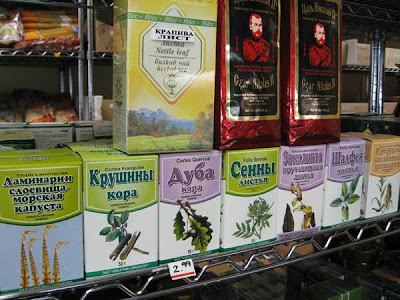 I bought a whole smoked mackerel for $5, and it is fork ready. I used to see these as a kid in old delis, and here they are again. 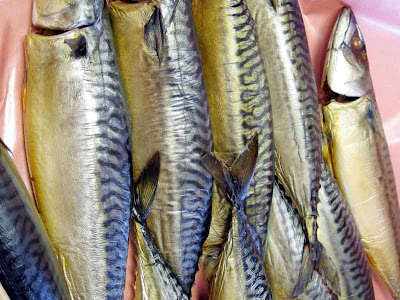 Try fish soup, chicken pate, Want to liven up rice, add some dried, tart and tangy barberries, and the taste is unique, and they are high in nutrients. The eggplant is freshly made. 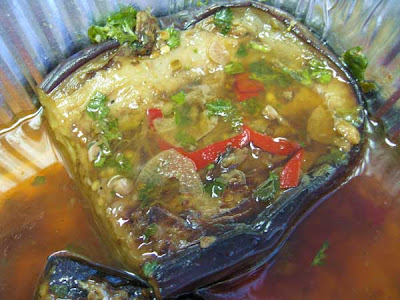 Very traditional is halodetz., a freshly made cold jellied beef , or aspic delight with beef, carrots, wine,pepper and spices, eaten cold, served as an appetizer,often at holidays, with spicy mustard, sliced raw onion, and vodka or beer. Very tasty. I likd the cooked eggplant. “Privet" or “Za vas” (cheers!)

As I was walking out, I noticed up to the minute editions of Izvestia-the once Official Russian newspaper founded in 1917, 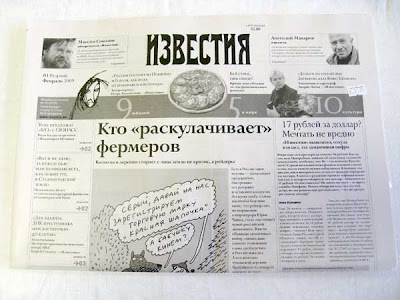 and Russian editions of Esquire, Forbes, and Playboy. Yes, there’s differences between the English, and the Russian editorial and pictorial slants. The New York Times now has articles in Izvestia-times have sure changed! 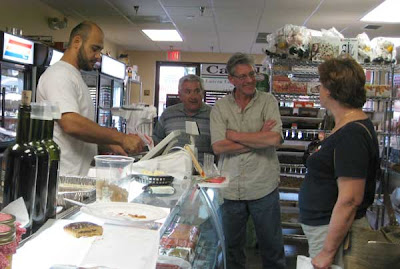 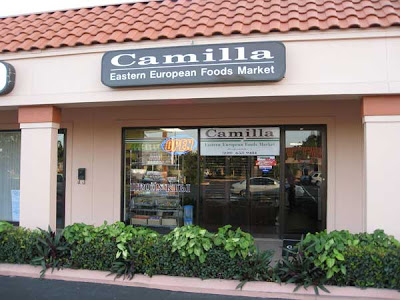 Posted by Ivan Seligman at 9:48 AM

Ivan, this place looks AWESOME, and I didn't even know it was there. Drive by it every day! Totally going this afternoon now, though! Thanks!

Visited there on Saturday (was picking up my most-favorite-in-the-world-falafel-pita at Pelagos in the same plaza) and loved the place! I only bought a container of kefir because I wanted something healthy though I should have looked for those smoked mackerel that you mentioned...darn! But I tried something new as I'd never had kefir before..*Love it* & it made a great smoothie for me this morning. Thanks IVAN!!!!! I'll go back there again soon. Owner and his little daugher very gracious!

Glad you like!
Yes, kefir is perfect for smoothies with taste! The Yoplait type yoghurts are so processed and unnatural. Kefir has the healthy live cultures in it, that Yoplait processes out.

This "hole in the wall" named Camilla is such a treasure chest of goodies!

I love you ago cazo and ago mirsad. you are the best. i love tres fratellis too !! i miss you so much

Too bad Aziz enjoys pumping diesel fuel into wetlands. Maybe that flies in Eastern Europe, but not here.

I've linked to your great review of Camila's at:

This should boost your review in the search rankings, as your page for Camila's is way better than mine :-) I'm also on the search for Kefir - real Kefir grains as I picked up a bottle at Whole Foods, not realizing that sometimes Kefir is more like a smooth yogurt rather than the real thing. I've been growing my own yogurt for a while and now want to grow Kefir - hopefully I'll be able to do it via the real thing, as a posting on another website mentioned Camilla's in naples by name. Ken, webmaster of http://free.naplesplus.us

I prefer kefir to yoplait and other mucinous creations...I've not had the kefir grains as a starter for my kefir own yet.

People on the East side of town also rave about Moe at Old World Market - at 2800 Davis Blvd,#103.(He says, mention this blog, and get 5% off at Old World!) The two Eastern European based markets don't stock the same brands generally, and specialize in different country's goodies, which makes it worth a visit to both.