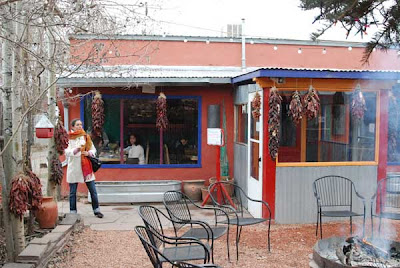 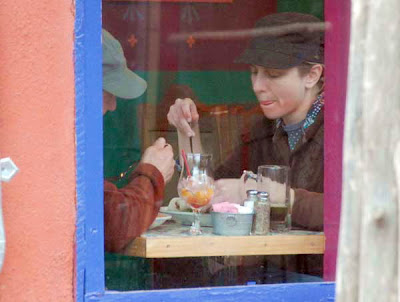 Taos is lower key than its wealthier neighbor, $anta Fe, and it sparkles in New Mexican cuisine at Orlando's, located ~2 miles out of town. Several locals independently said it was "the" place to have the best New Mexican Cuisine, "a must visit", and just "great food" in general.We were happy to have "Christmas in March" at Orlando's, after spending a half day at the wonderful Taos Pueblo, buying high quality turquoise jewelry, and prices easily 1/2 of what they might be in $anta Fe.
An early spring blizzard gave a beautiful few inches of powdery snow. Orlando's had a welcoming raised firepit going in front of the restaurant-we heard they serve complimentary hot chocolate to those who waiting outside. We arrived early for dinner, and while all seats were filled, yielding hour long waits in season, its 20 or so tables turn over pretty quickly in the off season. 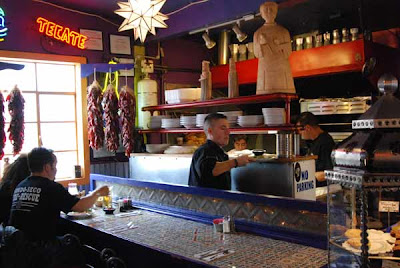 Our seats in the back were by a window decorated with paper cutouts. 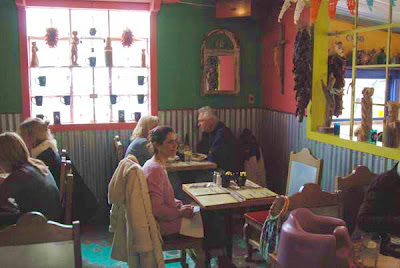 the painted floor had several layers of paint worn through, leaving a nice tricolor decorator touch. 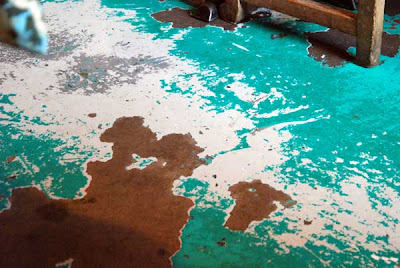 On the wall were countless awards of excellence earned by supplying quality food for over a dozen years, and some Orlando's t-shirts. 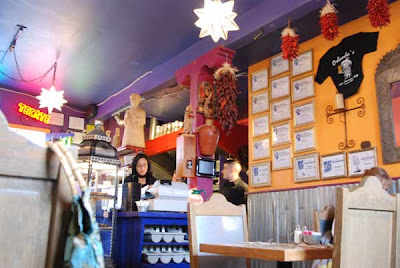 By the bar, was owner Orlando Ortega himself, with his lovely partner. 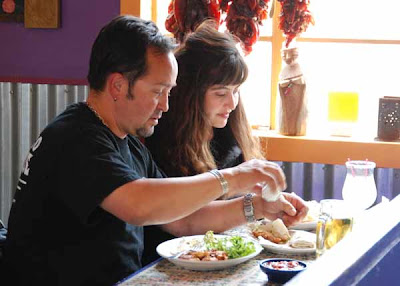 We had the famous Los Colores (enchiladas) for $9.75, presenting three blue corn enchiladas, respectively filled and topped with: chicken topped 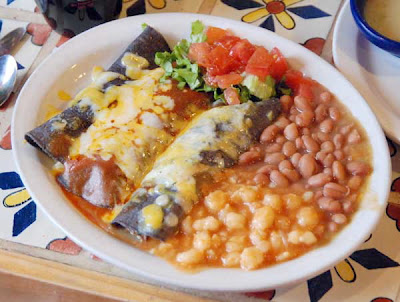 with green chile, shredded beef topped with red chile, and cheese topped with chile caribe. No, it's not a Jamaican concoction, it's a traditional New Mexican style of hotter red chile-medium, to me. And we ordered our chile on the side, "Christmas style", with a dish of red, one of green, and the bonus of the hotter red chile caribe as well. All very, very good chiles, and the Los Colores is filling.
The not so traditional Grilled Shrimp and Chile Relleno Combo ($11.25), 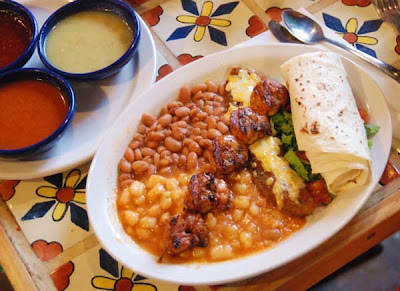 is no less filling, with a yellow cheese covered crispy chile relleno, five perfectly grilled shrimp, tasting as if lightly smoked, a warm flour tortilla, and posole and pinto beans. Orlando's chile relleno is said by aficionados to be among the best in New Mexico, and I defer to their expertise.
Posole (hominy style corn) and pinto beans are on the sides of most of the plates at Orlando's, and tasty. The chile, red or green, is between mild and medium in heat, and it has a "sparkle" on the palate that I just don't find in jalapenos, Anaheims, or other "grocery store" peppers. Great Hatch style chile warmth, sparkle and taste without too much heat-a favorite chile of many! The "Hatch" green chile is said to be descended from Anaheim chiles.Every restaurant has their special "pepper patch" supplier. The red chiles are dried, and after November, nearly all green chiles have been long fire charred and frozen.

Next time in Taos, we'll try the Carne Adovada-Orlando's style is not the usual shredded or chunks of pork, but rather three pork medallions topped with spicier chile caribe, or the Baja Style Fish Tacos with a green chile mayo and cheese topping deep fried cod, with choice of beans, fries or posole. The Chimichanga, below is popular. 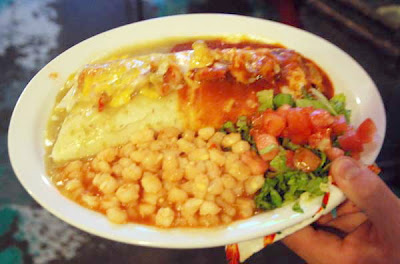 They are also known for their Grilled Burgers and beer-battered fries (7.50). Soft drinks are $1.50 each, and domestic and Mexican beers are around $4.00, with a few wines for $5-6, or by the bottle for $15-23. Wow-a family can eat like kings here, and they do-perhaps a third of the tables had kids. We were happily filled for $22. Other offerings include: Smothered Beef, Chicken or Shrimp Burritos; Vegetarian Burrito; Taco Salad with Chicken Breast; Blue Corn Cheese, Beef, Chicken or Shrimp Enchiladas. Desserts include: Flan, warm Brownie sundae, Pecan brownies, Macadamia Nut Cookie, Biscochitos - chocolate dipped, Ice Cream Sundae, Frozen Avocado Pie, and Mama's Apple Pie.

Posted by Ivan Seligman at 4:14 PM

This is one of my top 10 restaurant favorites! And I agree about the chile relleno; it's the best I've ever had.