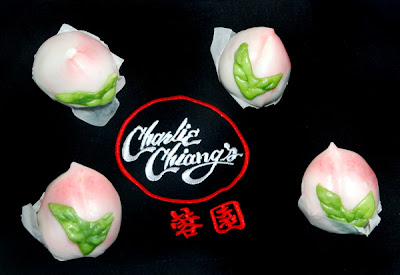 Last month, I wrote up Charlie Chiang’s, and learned Dim Sum would be starting. I've been in withdrawal since Bonita's Bo Lings went Belly Up. Charlie Chiang’s just started serving Dim Sum. I offered to select, and take photos of a dozen or so dishes-in exchange I got to taste and comment on the food, pluses and minuses. That's why the photos look spiffy. For my reviews, I normally wait till a restaurant “gets in its groove”, (1-5 months) pay for my food, and photograph the food on the table-today I took it outside in the shade of the river front patio. With that said, from this non-covert sampling, there are some very, very good items on “Dim Sum Day One”-it only gets better as things are fine tuned.

I’ll cover my favorites, first.
The four pieces of shrimp toast for $4 are the equal of the best we’ve ever had. The moderately thick fresh bread base is moistened with 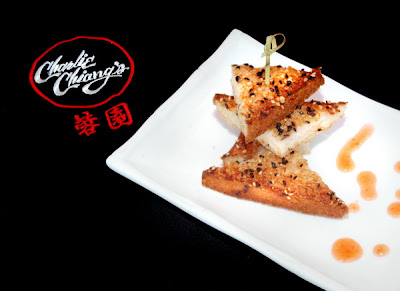 a touch of shrimp broth, covered with a thick layer of shrimp paste, sprinkled with white and black sesame seeds, and toasted till lightly browned and crisp. One bite gives crispness, savory shrimp, and them the luscious moist toast-the best of shrimp toast texture and taste.

The Beef Noodle Soup ((9.25) is a savory sleeper, with a wonderfully seasoned light savory broth, spaghetti like noodles, 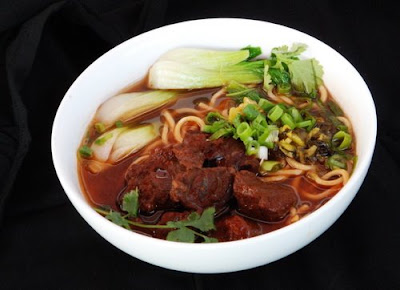 and a goodly portion of deliciously tender beef slices, with bok choy and scallions. I hope they have this healthy brimming bowlful on the weekday menu soon- it’s delicious.

I flipped over the Steamed Chicken with Ginger and Scallions for $6, it’s velvet soft and tender and the flavoring 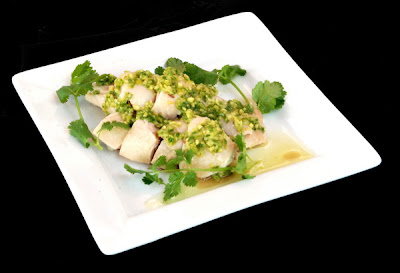 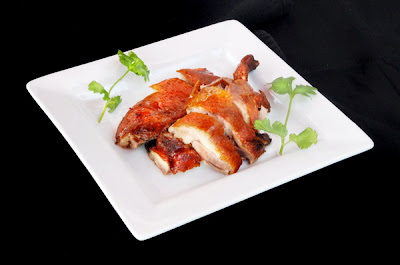 reigns supreme, perched atop the tenderly savory and juicy flesh- this is wonderfully cooked duck with bone-in goodness! A couple orders of these would be a great price and portion for a duck dinner. Compared to the Roast Chicken with Bones (6), duck, by its nature, has a ribbon of succulent fat under the skin, 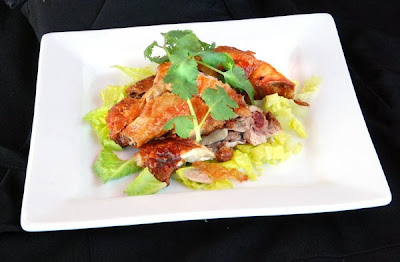 giving it a more luscious mouth feel. Both have crispy skin, the mark of proper preparation, a Chinese art form.

Beef short ribs are a good portion of delicate bone-in ribs, not heavily or sweetly sauced like BBQ sauces, but lighter, 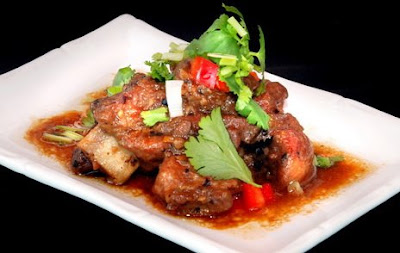 with accents of ginger, green onion, and bits of red bell pepper-a savory dish-have it early to mid course. 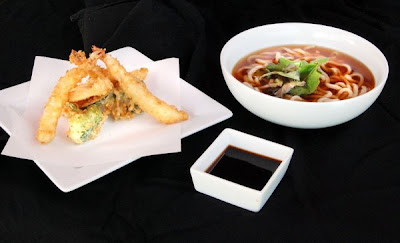 for two lighter eaters. Udon noodles, made of wheat flour, are a Japanese tradition that’s also long had a place in some Chinese kitchens. Pencil thick, long and way more succulent with savory broth, they are so much more tender than pasta noodles- betcha can’t eat just one- they’re addictive. The properly battered tempura shrimp and veggies must be eaten piping hot.

Ribs with Honey Sauce are bite sized, proper cooking concentrates the flavor of the ribs, and there’s virtually no fat. 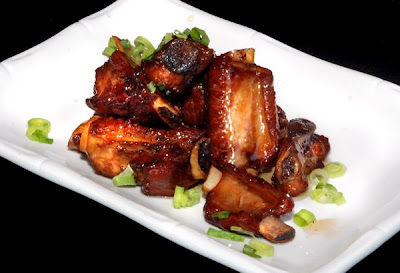 The light saucing is appreciated.
The long, narrow Japanese eggplant is sliced, lightly tempura battered and lightly fried, so the eggplant has 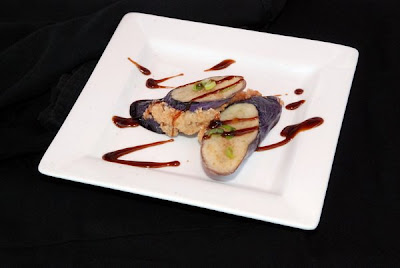 Like some heat? Get the succulent Spicy Tangy Dumpling quartet with peanut sauce (4.25)- it’s a mild-medium heat, 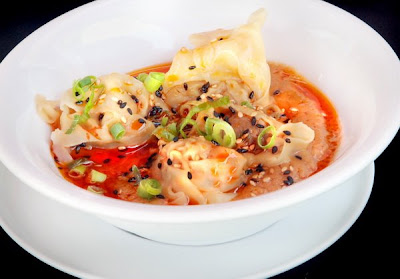 Pork Chops are cut very thin quickly cooked, with a delicious thick slightly sweet Asian red sauce.
Jade Vegetable Dumplings are color-coded green for vegetarians, with a delicious filling of potato and herbs, with just a hint of light spices…four for $3.50.

The chicken feet are properly cooked, so there’s the desirable touch of gelatin countered by the mildly spiced sauce. 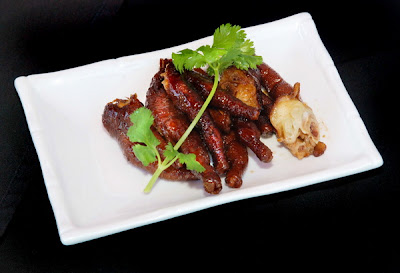 Yes, it’s an acquired taste, and there’s scant meat on a foot-some diners try this first, to gauge a Chinese cook’s ability. They score well.

Shrimp dumplings are pretty translucent thin white rice packages with shrimp and a potato like filling for delicate palates, It’s decent- the taste just doesn’t jump out, and I prefer more striking spicing, and this has the delicacy of shrimp.

Pork Potsticker Dumplings filling is fine, the dumpling dough was denser than I like on this first day-they will thin the dough in the future, let me know how they are.

Finish things off with four $3.25 Dessert Peach-shaped buns, filled with traditional bean paste, or a Malaysian Sponge Cake, three (not four) for 3.25 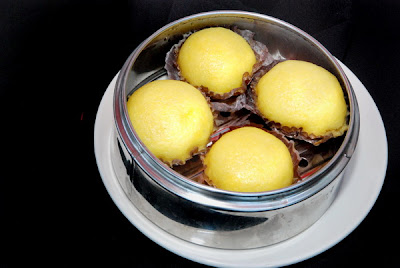 I flipped over the simplicity of the fresh strawberries, with cubes of water chestnut cake and whipped cream in a martini glass- 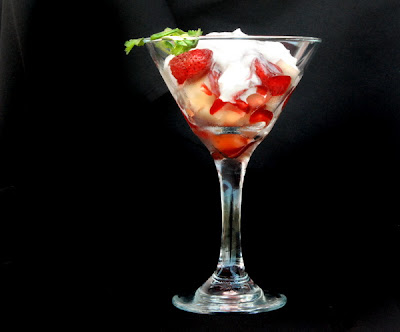 perfect for summer on the porch!

Overall, there’s some items that would hold their own against any Dim sum in Hong Kong, and that says a lot. This Dim Sum certainly has the quality that we had at Bo Ling’s. If enough people support it, it will also gain the carts, and perhaps add to the over 60 items now offered.