Everglades City Blessing of the Fleet at Rod and Gun Club 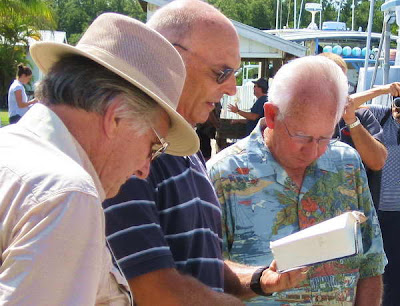 Nine crabbing boats lined up, and docked behind the over 100 year old club. Some boats included Jenny, Miss Holly II, Slim Pickins, Flirtin with Disaster, KitKat, Lil Liza, and Mine and Yours. 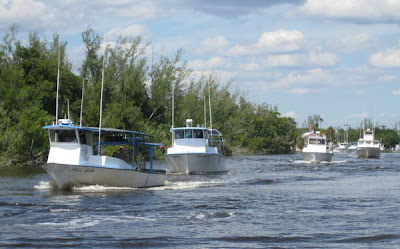 The event started at noon, warming up with a kids frog-jumping contest, a serenading guitarist, restaurant food on the patio, and a dining room church bake sale, with cakes, muffins and cookies. Outside, people stood in the shade of the white and yellow canopy until the fleet docked, 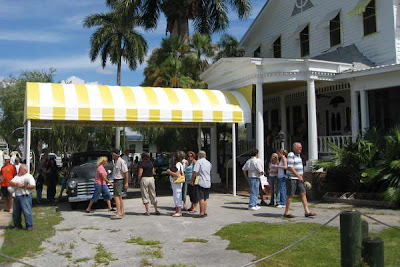 then moved into the hot sun along each boat for the individual blessing of each boat and its crew. 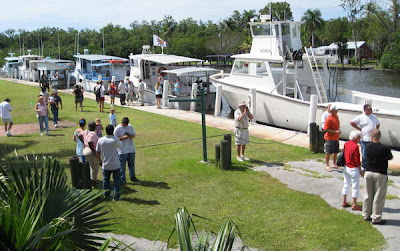 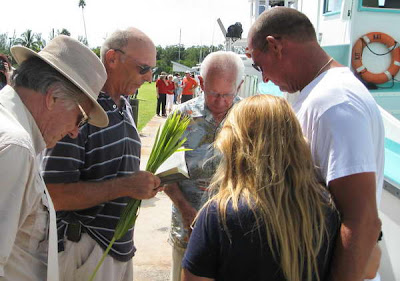 People then moved back into the Club's cool pecky cypress lobby and the rustic dining room to take home bake sale items. 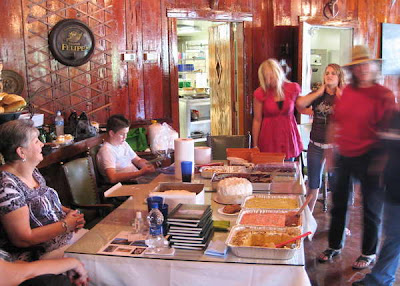 History time. Everglades City, previously "Everglade", is a tiny fishing community on the NW border of Everglades National Park. Going back in time, founder William Smith Allen started a settlement on Potato Creek in 1873 (later known as the Allen River, then Barron River) and left. Then sugar growing George Storter formed the city of Everglade by 1893. George Storter purchased the Allen House and most of Everglade after Allen's death. He expanding the Allen house into a popular fishing club, The Rod and Gun Club, which, along with the city and county, was later purchased by advertising magnate Barron Gift Collier ~1923. Collier converted the Club into his private Club, a showcase for entertaining investors and celebrities. 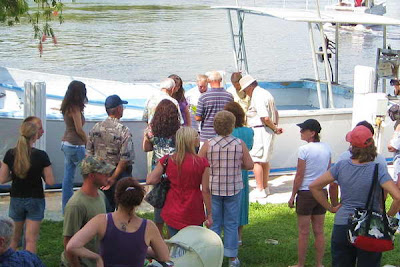 Mr. Collier owned over 1,1 million acres of SW Florida; he was the largest single landowner in the USA. He had Collier County named after him in 1923, in exchange for the anticipated completion of the Tamiami Trail. The city then became known as Everglades City, and it, not Naples, was the County's main city. This was Collier's base to create, drain from swampland, and mantain the Tamiami (Tampa to Miami) Trail. From this artery, he'd develop his acreage and build cities that would exceed Miami in population. He built Everglades City into a large company town, with a railroad yard and depot, and housed numerous workers. The Tamiami Trail opened in 1928.
.
Anticipated real estate profits didn't ensue. The giddy Florida real estate market bubble had already burst after Miami's 1926 devastation by a hurricane. The Depression came, and few vehicles were on the highway to buy swampland. Mr. Collier died, age 66, in 1939. After Hurricane Donna came in 1960, devastating low lying Everglades City, the Collier family sold the Club. The County seat moved from then-destitute Everglades City to Naples. Alligator Alley in the 60's, and then I-75 now carry ~98% of the SW Florida traffic across the coasts.
.
The Rod and Gun Club was purchased in 1972 by the Bowen family, who faithfully maintain its 100 year old charm. It's a classic oldie, with high ceilings, slowly turning fans, dark cypress walls and dark wood floors. Numerous fish, crabs, birds and an alligator's hide deck the walls. Swim in the pool, have drinks at the bar, 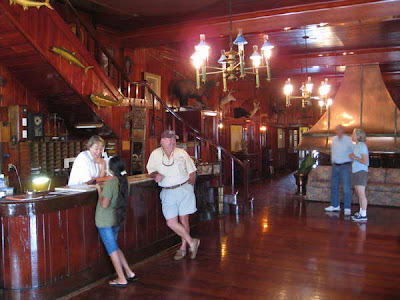 and enjoy the screened, covered patio-a a popular lunch spot.
.
During the 1980's Everglades City and neighboring Chokoloskee were a smuggler's paradise for receiving bales of "square grouper," brought by boat and planes. Fishermen became millionaires from bringing home the square marijuana bales from South America, which were then distributed throughout the USA. Read" Totch: A Life in the Everglades", for the story. The fishermen's building large homes and driving flashy cars clued the Feds into their smuggling. Men left their homes to serve years away "in college", returning to their remaining stashed money, and mangrove roots of fishing and crabbing. Everglades City has had a revival in the last ten years, population is up to ~700. There's spots such as Ivey House-a bed and breakfast, the Everglades Seafood Depot, Backcountry Cafe, nearby Chokoloskee's Oyster House, fishing guides, and other businesses. The Florida stone crab season runs from Oct. 15 to May 15. Here's to a blessed season for both crabbers and diners.
.
Prices range at the Rod and Gun Club from $11-20 for leisurely lunches, and $20-27 for generous dinner portions of seafood, seafood platters and steaks, which includes salad, vegetable and choice of potato. Bring cash. No credit cards were accepted in 1923, or now. Hire a guide for a few hours, and take the Club up on the the $15 "you catch em, we cook 'em" deal. Lodging is $110-140 in season at several cabins-check them out before renting to see which you prefer. 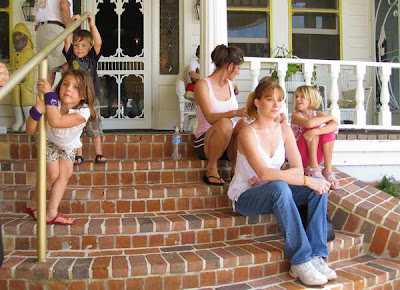 The Rod and Gun Club is 40 miles south of Naples, 85 miles west of Miami and 90 minutes from either the Miami International or Regional Southwest Florida International Airports.200 Broadway, Everglades City, 239-695-2101
Posted by Ivan Seligman at 9:18 AM

Oh nice! The Rod and Gun Club looks like the real deal. I'd love to see it and eat some of their delicious meals, at least they sound delicious from what you're saying. I really should visit Florida sometimes, it has so much to offer. In case you ever visit Toronto check out the The Stockyards. Such an amazing restaurant! Thanks for your post, good reading,

You've a very nice web site. I will email you when I go to Toronto, what a dinnig capital!

I filled up on cakes, and didn't have room to try the Club's food. I'm saving that for another visit, when I may go canoeing/kayaking in the area. I did eat at a fun, funky spot, east on Tamiami Trail, Joanie's Blue Crab Cafe, in Ochopee.