.
The evening did not get off to a good start. I made reservations for 5 people for 6 pm, a week ago, and had received several calls verifying our reservation over the ensuing days. We arrived for our 6 pm time five minutes early. The hostess said they were not yet ready, and asked us to sit in the bar area. 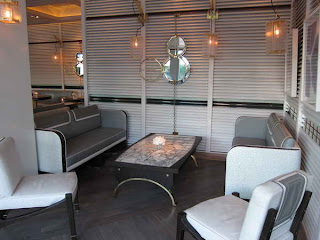 Six pm came and went. The dining room was empty, and staffers were just milling about. We could have been seated, and bread/water at least put out. Instead, we were seated at 6:13. We were not happy sitting near at the bar, yet not being told anything other than “soon” every few minutes, as we could have ordered a round of drinks and brought them to our dining table. Clearly, the customer’s comfort is not always placed first here.

Scarpetta’s curious landlubber's cool take on nautical inspired décor is certainly different, using white lines, or ropes. There are several structural oval columns breaking up the dining room like ship's smokestacks each with shiny mirrored surfaces and areas of apparent dark brown leather. Overall, the dining room is bright with white shutters and ceiling. Windows open eastward for a view that quickly fades with dusk. Music varies from light jazz to different vocalists at a nice background volume. 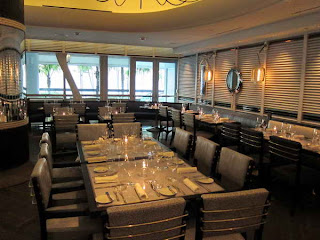 Servers wear vests with ties, long sleeve shirts, and aprons.
Our server brought a quite tasty selection of foccacia, stromboli, and another bread. All were warm with crispy crusts, and served with a tray of citrus olive oil, eggplant tapenade, or a special butter. (Did you know stromboli originated in the USA in the 50’s, not in Italy?) One of my party asked for sliced lime to go with his $12 Bacardi Superior rum and coke. It arrived without lime, and we had to wait a while till the server brought lime slices. Not good, as there were only a few tables occupied at 6:30. Then the $5 Diet Pepsi clearly ordered "with ice" arrived without ice. It’s not like Scarpetta is brand new-it’s been around a while. The wine list is weighted to the "over $100" bottles, with many Italian wines.

We had better luck with ordering appetizers. They include creamy polenta with truffled mushroom fricassee ($16), octopus with fingerling potatoes (17), and heirloom tomatoes basil and arugula salad for $14. Although a small portion for $15, I enjoyed the luscious braised short 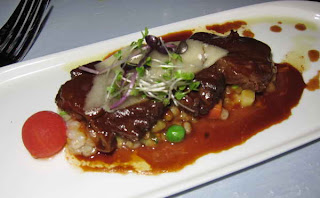 ribs of beef with a rich sauce, taken of the bone and served over a vegetable and faro risotto. Short ribs just don’t get more tender or have a richer taste than this-I’d have thought they were cooked sous vide. Highly recommended.

The $17 crispy fritto misto on the other hand, is a generous tower of crisp fried calamari, with two fried shrimp and a scallops, mixed with fried zucchini, artichoke hearts, 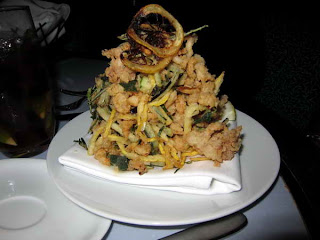 and tossed with herbs and lemon. Eat it quickly, as it loses its crispiness pretty quickly. My companions ordered the $14 arugula salad, with toasted pine nuts, pecorino, and a truccioletto 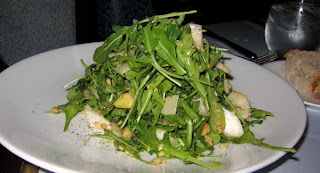 vinaigrette. A simple salad, they felt it was high priced for the portion.
The entrees or piatti are not priced out of line for the Fountainebleau location. The slow roasted
Berkshire pork ($35) is perhaps a 7 oz tender portion, 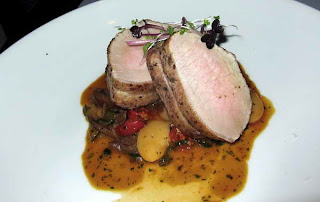 cooked pink as requested, with a gigante bean ragu , pancetta and spices. Nicely done, a bit expensive at $35. It could have used some more spicing. 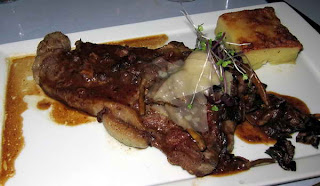 My group of five enjoyed the roasted lobster (42), with stewed seafood, sunchoke and sea urchin. 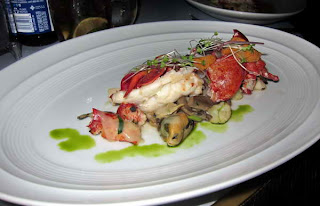 The lobster was tender, and the stewed seafood was nicely spiced. We had three orders. Two orders were felt to be very good; the other was not as tender. Lobster was the favorite of our table of diners, followed by the steak, then the pork down the line. Yes it's pricey for the portion-this is an upscale tourist hotel.

The service picked up, and by mid meal was very good. Servers quickly cleared plates and replaced silverware. Water and drinks were refreshed nicely. Coffee ($5) is nicely served with a tray with tongs and cubes of brown and white sugar.

The appetizer and entrée portions are not that big, so we had plenty of room for dessert. Each desserts is $11. We flipped over the coconut panna cotta, with a caramelized pineapple and guava “soup.” 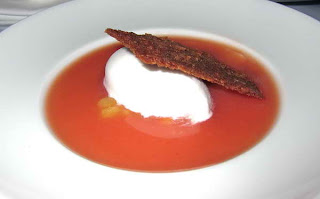 Rich, sweet and addictive- a must have!

The chocolate zeppole, like a fried donut “hole” or fritter, has a nutella center. 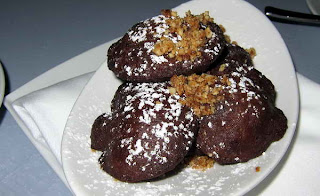 Dip one into the vanilla anglaise and it’s delicious. Candied hazelnuts and powderd sugar are on the top. Tasty.

Our resident chocoholic found it hard to share even a few crumbs of her Amedei chocolate cake, with toasted almond gelato 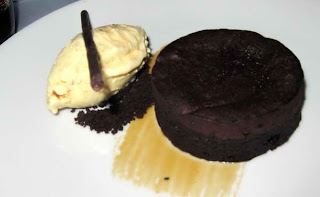 and salted caramel sauce. Another hit.

We went to see the Bleau Bar inside the Fountainebleau’s expansive lobby. It has a quite original look with the opaque floor lit by blue light and a central orange/pink tower for the bar. There were few people a the bar area, compared to people filling 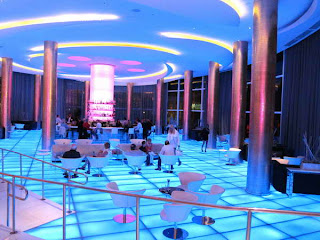 other bar areas along the beach earlier and later, the same night. The Fontainebleau put a lot into renovating-I hope it's enough of a tourist or local magnet to keep it profitable. We walked by Gotham Steak, another restaurant just off the lobby, and the prices are a quite bit higher that Scarpetta, with steaks ranging form $30-64. For the kids, a 10 oz burger is $24. Gotham’s sides feature iceberg wedge salad with apples shallots and bacon for $15, creamed spinach for $12, onion rings for $10, and a baked potato for $9. You get the picture. We’ve heard good things about Hakkasan.
Solo is a tiny quite nice pastry, cake and chocolate shop/ café in the shopping arcade just north of the Bleau bar.

Back to Scarpetta. Initially, the wait staff dropped the ball repeatedly, and my table of five was one of only a few tables that had customers. The wait staff did improve by mid meal-overall the service became above average, with timely clearing of the table, and refilling the delicious bread basket and water glasses. (I later heard from others that service is often quite variable.) We were not rushed. Food portions are on the smaller side. The food variety and quality is enjoyable. Given that it’s located in a posh hotel, Scarpetta offers reasonable bang for the buck on food, with higher wine prices. Figure on spending over $230 a couple for a nice dinner with drinks or wine. I’d rank it close, yet following after Michy’s and Talula for food quality and bang for your buck, if these three were your choices. We liked our steaks better at Talula. Many of Miami’s better restaurants certainly are not on Miami Beach-they are moving toward the Design District. The Fontainebleau has nicely upgraded its physical plant and its dining. Think of Scarpetta as Mediterranean, rather than Italian, and you’ll better know what to expect. The somewhat limited menu lets them concentrate on doing well on what is offered.
When looking for a mid Miami Beach dining spot, Scarpetta is certainly worth a visit.
.
Scarpetta at Fontainebleau, 4441 Collins Avenue, Miami Beach - (305) 674-4660 fontainebleau.com
Posted by Ivan Seligman at 8:56 PM