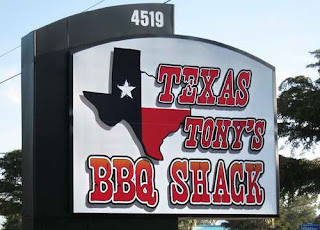 Texas Tony's got a smokin' hit on his hands.  I've lived in Dallas, Texas and frequently visited Sonny Bryan's original spot on Inwood by Parkland Memorial and I-35, and other spots around the state for Texas style BBQ in the 80’s and 90’s. (I do miss sitting in the vintage 1950's school desks at Sonny's eating hot juicy brisket!)  Texas BBQ is not about sweet or mustard sauces; it's about beef-hearty beef be it brisket or ribs. It's cooked low and slow, letting it linger long hours to develop that rich taste. When brisket is served, it's without any sauces-they are only on the side, not slopped on top as is customary at other BBQ spots. Texas ribs can be slathered with sauce at the end. Pork is served and appreciated, but beef is king. Texas is about tasty, finely done smoking, period. Tony says " It's all about the rub & the smoke ring."  Smoke rings vary in depth and intensity-having one to me is just a secondary badge of a meat being smoked properly, that's all.  I close my eyes and savor the BBQ-taste and tenderness are all that really matters to me, and Tony has ably nailed it on both accounts!
I was driving by Tony’s and didn’t have time to get some diners together, so I had take out of Texas Tony’s BBQ. Yes, I did sample it as soon as I got in my car, as the aroma of my selections ordered me to! When BBQ talks to me, I obey! It's the previous site of a Fitzgeralds and before that a Shoney's. Turns out Tony, originally from Texas, is the man who started Pincher's Crab Shack, and now there's about 8 of them. He's on to something, again.
In front of the restaurant sits a large portable BBQ cooker/smoker. Inside, it’s a comfortable casual family friendly spot that’s great for watching games on TV. Come as you are, you’re dressed just fine. 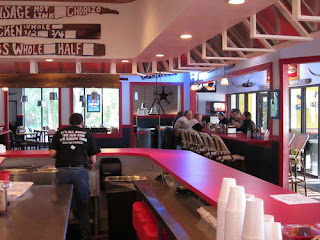 There’s plenty of seating in several dining areas. Look up at the menu, order at the central station, and your order is brought to your table. No shortage of beers or soft drinks.
My BBQ brisket at $14/lb was wonderful;the equal of any I’ve had at Dallas’s Inwood Sonny Bryan’s, or at a host of tiny BBQ pits revered by old times as “the real thing.” It was so tender and properly smoked that I was in awe. Now if you are a fan of say North Carolina, Georgia, Kentucky, or ……just fill in the blank; you may not appreciate a pit boss that replicates Texas BBQ in Naples, Florida. That’s fine, just don’t bore me or your family with whining and silly-ass complaints. This is great Texas BBQ; hush up and enjoy it!
The BBQ beef tenderloin ($18/lb)  is very tender and delicious in its own way.

If there’s a complaint to be made, it’s only that I wish I got more of a portion for the price. It is somewhat more spiced than the brisket with its rub, and well worth a try. At times I couldn't favor brisket over tenderloin-it's close.
The BBQ chopped  pork  for $11.49/lb is juicy, tasty and just plain delicious. It’s good, but not as good as some I’ve had in Georgia, or even in Hawaii. The flavor is there, but the meat’s juices were “a little watery” according to one BBQ maven.
Tasted fine to me. Different strokes for different folks. Again, Pork is a prince, not the Texan's king of BBQ.
There’s also $9 whole smoked chicken which will be served pink in color, that’s the expected color for the BBQ process. 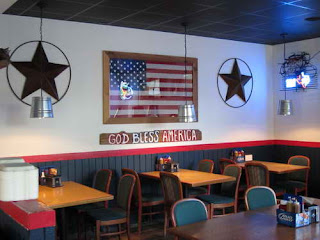 I didn’t think to bring home some sides. For $1.99 each, they offer Mac n cheese, collard greens, fresh cut fries, baked beans, pinto beans, cornbread, Texas toast and cole slaw. No shortage of combos or sandwiches. Save room for dessert- the $4 desserts include sweet potato cheesecake, banana pudding, carrot cake and key lime pie.
I’ll be back, or have a friend from the East Trail buy some more for me. Next I’ll try some sides and the St Louis style ribs, Texas sausage, or chicken.  I treasured my portions in the fridge for days, and need another fix of delicious authentic Texas BBQ.