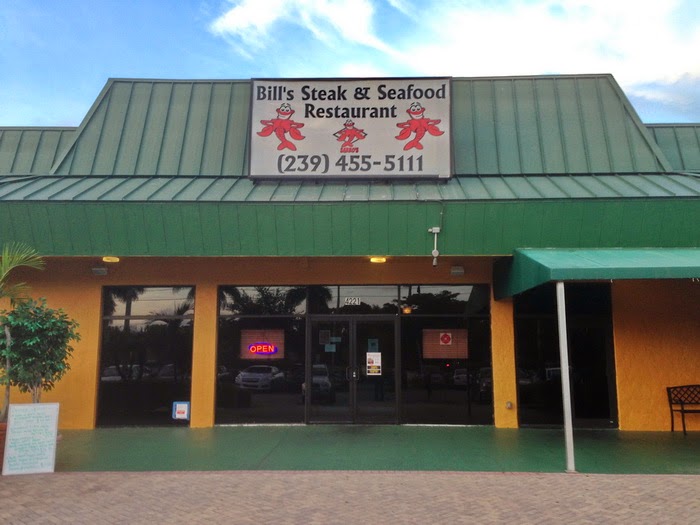 Bill's Steak and Seafood Restaurant has got to be experienced to be believed!  This seafood and steak gem in the Lakewood Plaza is a time warp, a snapshot of all that was great in the 70's, from live music and  dancing to humongous lobsters and steaks at wallet-friendly prices. This earns Kia Billy's HUGE designation on the lobsters alone. Live in North Naples or Bonita Springs?  C'mon down for New England style seafood, and steaks that greatly exceed the quality of, say,  those at say Naples' 5th Ave's Avenue5,  for less than half the price.

I went on a Friday at 6 pm with my dining companion. We were greeted and seated quickly at a booth. Seats were empty.   Not for long... 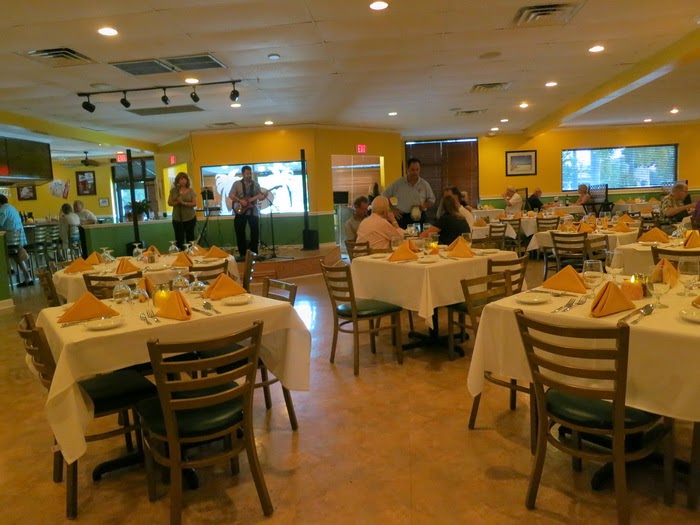 An hour later there were few seats to be found. No surprise. During that time we leisurely dined and  enjoyed a singer and her guitar playing partner singing Sinatra, Beatles and other artists' songs from the 60's and 70's. In no time, couples in their 50's to 80's were filling up the dance floor. 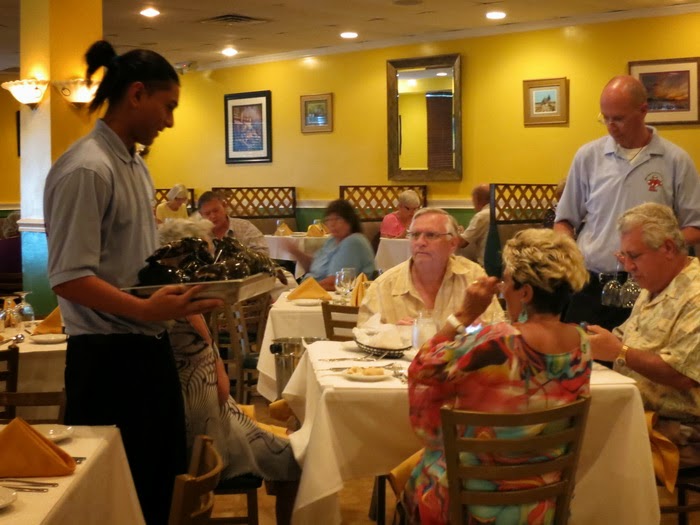 Yes, it is a superb special that is offered fairly regularly. Go to any other restaurant, and if they could even find such a big boy, that crustacean would go for $250-$300.

Here's my size 8 hand for comparison to Larry the lobster's level. One claw alone has almost a pound of meat! 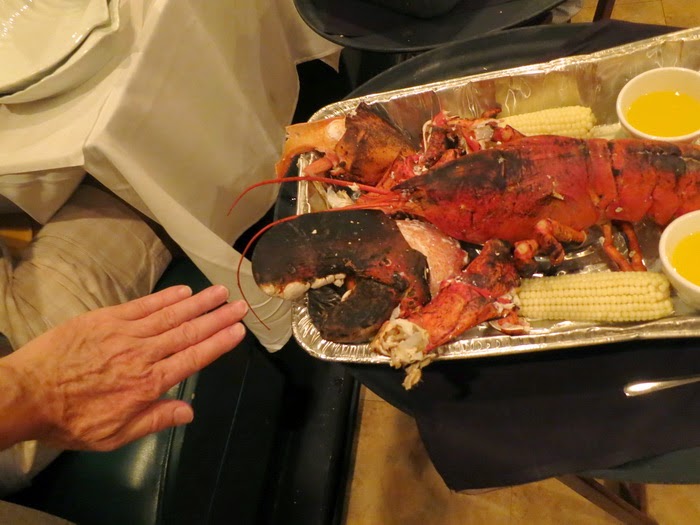 During the next couple hours, a good dozen more nine pounders were cracked and served tableside. Next visit, I think I'll first go without food for two days, then share a nine pounder with a friend. BTW, all who ordered the lobsters said they were as tasty and tender as any lobster; size does not correlate with toughness, only overcooking. 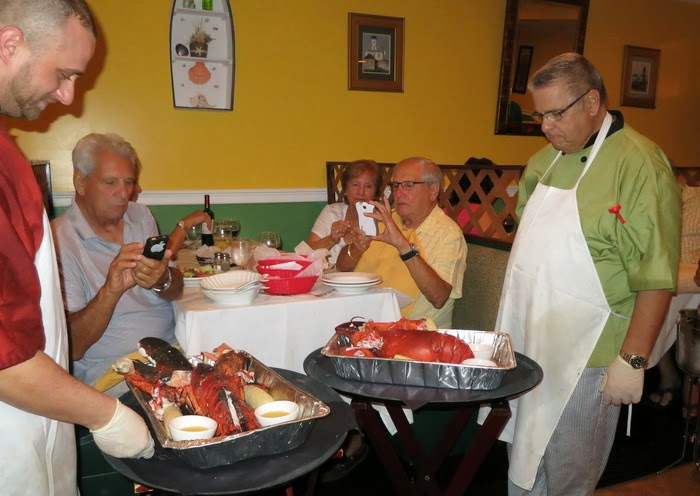 Our server Sal and his sense of humor alone is worth the price of admission. He said with his best gangster voice " If you don't get the lobster you'll sleep with the fishes."  He suggested a house unoaked Chardonnay. for $3, it was quite delicious-crisp and lightly fruity. We ordered a second one, big spenders that we are. I've paid $8-12+ for Chardonnay in Naples that didn't taste as good.   While the house Pinot ($6) was good, the Chardonnay with seafood is the bomb. Bottles of wine range from $22 for a Malbec to 39 with a  $37 Chalk Hill and a $47 Cakebread. Just want a drink? The full bar is the size of Rhode Island.

The atmosphere is warm and friendly. We wandered over to take photos and chat with those that ordered the 9 pounders. Others came by to take photos, or compliment dancers, now seated. "Strangers are just friends you haven't met"  could be Bill's motto. Yes, this time warp of a restaurant has down to earth Midwestern charm and friendliness in spades.

Our bow to the past was ordering the clams casino special at the '70's price of  $6. "This is buttery crazy good" my companion exclaimed. The five good size clams are served hot, topped with buttah-laden seasoned bread crumbs, spices, perhaps parsley and cheese,  and bacon. Deelicious! 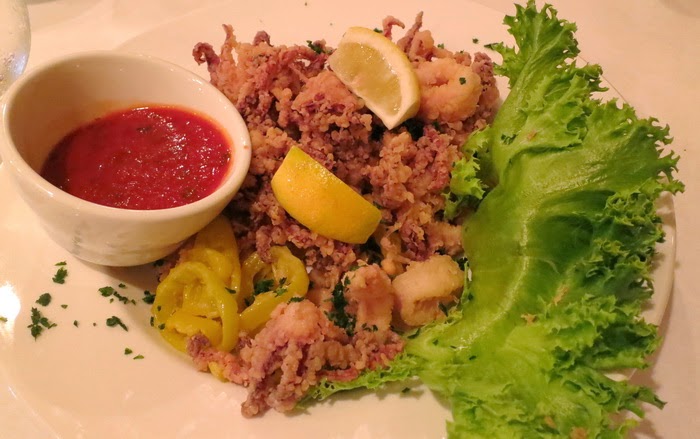 could be a meal alone for some people! The majority of the calamari were the prized baby tentacles, not the usual, and cheaper to obtain large body rings. The calamari was crisply tender, and nicely matched with a pepper and some rich sauce in every few forkfuls.

Sal suggested the 16 ounce porterhouse steak for $24, and I bit. Hey, if the place's name is Bill's Seafood  and Steak, and also Bill's Steak and Seafood, how could I go wrong? 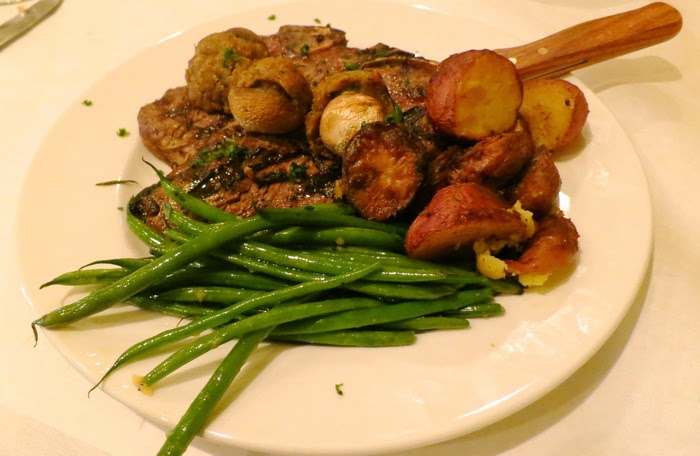 It arrived, larger in life, hot and delicious. Cooked precisely medium rare and nicely salted and spiced, it was far, far better than a $56 steak I recently had at  Fifth Avenue's Avenue5- that was improperly cooked and over twice the price. And, Bill's steak comes with two stuffed mushrooms,  about a half pound of roasted potatoes and haricot vert skinny flavorful green beans, too! Toto, I don't think we're eating steak on 5th Avenue anymore.  (BTW, in fairness, Avenue5's lamb is superb.)

The baked seafood casserole was reasonably priced at $24, with a nicely cooked assortment of shrimp, scallops, haddock and lobster. 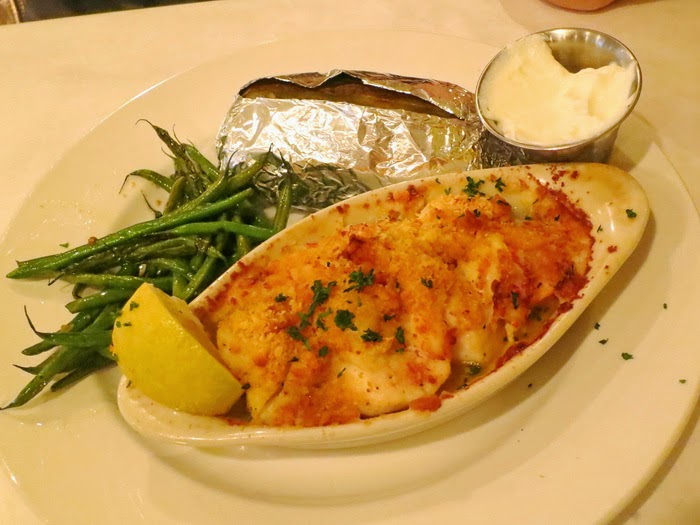 The cooked juices from the seafood made for a watery base. Next time I'll get the $28 Bill's New England clam boil with a cup of chowder, a pound of steamers, a pound of mussels, white and sweet potatoes, corn, linguica sausage and a hot dog!
There's a menu for minnows, er, kids.

We were too happily stuffed that we didn't sample a dessert. The lemoncello Marscapone cake; New England grasshopper with mint chocolate chip ice cream; and homemade bread pudding sound good.

Bill, the owner/chef visited each table-what a great down to earth guy. Wonder as we did how the prices are low, and portion size and quality are high.  He owns seafood markets in the Boston area, so his son ships pallets of seafood every day by jet to RSW. You can spot Bill by the lobster tank when he's not in the kitchen. 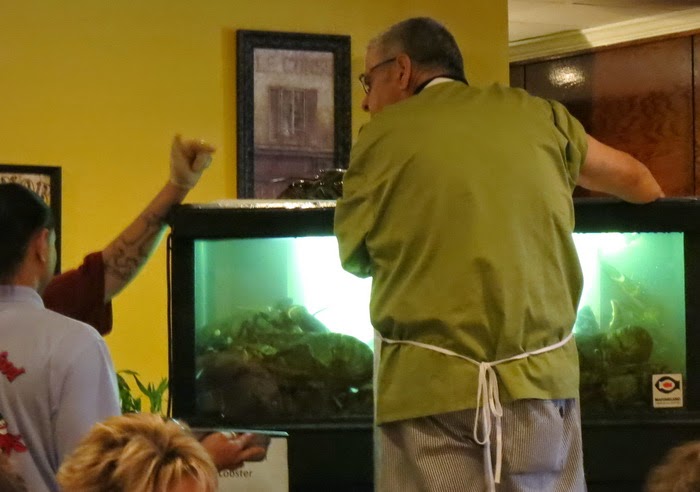 The '70's music, large portions and low prices are here to stay at Bill's  As we were leaving, the musicians sang the Righteous Brothers' "Unchained Melody and dancers swayed blissfully in each other's arms.

"Lonely rivers flow to the sea, to the sea." We'll be back... we admit it...we hunger for your steaks and lobsters.

Looks good -- thanks for the rec.

Glad to see you posting again.

I've perhaps 30 reviews I'm behind on... not much spare time at the end of a day!