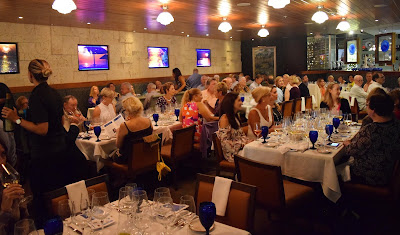 Over one hundred patrons supported the sold out culinary event, as restaurant personnel  gave of their time and talent  to help those suffering from the effects of Hurricane Irma. Jill Palmer, Executive Director of Florida's Southern Gulf Chapter of the American Red Cross, was the special guest.
The first course was Chef Cariot's delectable  foie gras terrine, with toasted brioche and richly caramelized plums, served with a glass of Meyer-Fonne Edelzwicker Alsace 2015. Some could have made a whole meal out of this dish!
Second course was my favorite; Chef Aielli's seductively simple appearing uovo stuffed pasta with black truffle and ricotta, paired with Massolino Barolo, Piemonte 2012. Sometimes this ravioli-lke pasta contains a whole egg yolk!  It's an art to making a fine ravioli (or simple roasted chicken for that matter.) Chef Aielli's creations never fail to amaze me! Next, was the creative loup de mer pastilla by Chef Cariot, with a brick-shaped  light cover encasing flavorful mixed vegetables and sea bass, and accented by a red pepper coulis.
Chef Aielli's 9-hour Masami Wagyu beef strip loin hit the mark, cooked at 128 degrees with bordelaise sauce, bone marrow panzanella (Tuscan-style bread) salad, and saba (reduced grape must). What a treat!
The dessert of desserts was Chef Cariot's classic French apple tart (tarte Tatin), paired with a scoop of Sea Salt's  Italian saffron Gelato. This saved me a trip to France for this delicacy...or or may have inspired others to make reservations for a dinner-at both restaurants. BTW, Have you ever seen Paris,while  covered in snow? Venice in a morning fog? These are experiences to savor, just like the food from Sea Salt and from Bleu Provence. 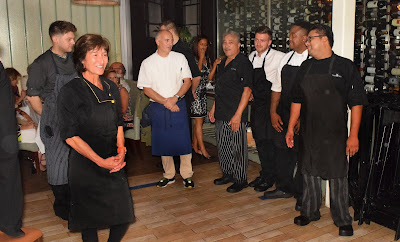 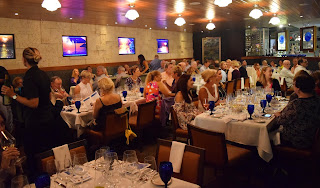 Posted by Ivan Seligman at 1:58 PM