The Paradise Haitian-American Take Out Restaurant. is an insider's special, tucked in a little shopping center at the southeast corner of 5th Avenue North and Goodlette Road North. It's been there for years. You have to seek it out, as few of my acquaintances have even noticed the restaurant's little sign, when whizzing by the Kwik Pik on Goodlette Road, at 50 mph!

The cuisine is rich, tasty and most importantly authentic, per the comments by others on line ordering their food, and Haitian acquaintances who say it's a great example of Haitian cookery.

While I often arrive after 5 or 6 pm, and have slim pickings, it's clearly best to arrive earlier, like luchtime, for the best selection. Today, the selection was between slow cooked oxtails, and a beef dish. As I can't always get oxtails on 5th Ave, I asked for an order of Oxtails ($10), for take out. It came almost overflowing a large styrofoam container with a huge portion of rice, lettuce, a large firm plantain-the only bland food, and with a choice of vegetables or bean soup-I got the soup.

The Oxtails were a generous portion and the tender meat was so tastily spiced and smelled so good, I snuck a few pieces to eat while at stoplights, when not actually driving the car! It was made with garlic, green onions, bell pepper, salt and pepper, and the perhaps cayenne pepper was just enough, to give mild heat on the oxtails' saucing. The bean soup, my favorite of the two for its' spicing, was more of a rich puree than a soup, of red-brown beans, with a smoky-rich taste. The delicious spicing I couldn't quite place, it was suggestive of cinnamon or other tropical spices, with a minimal degree of heat. All of this, for $10, was enough for 2 1/2 meals for many people. 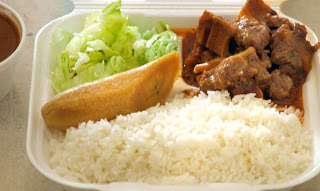 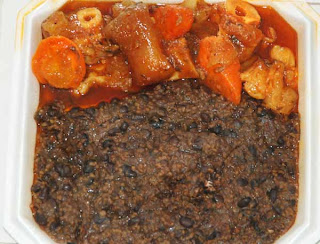 The Cows Feet ($8) (across the top of the plate) was a novelty for me, however it was a delicacy for the others taking it home, or for the one gentleman having it at one of the 3 small tables. The portion was large, with carrots, garlic and green onions, and was tasty with the spicing. There is not much meat per se, at all in the foot; the thick substance around the bones is firm, yet gelatinous, from slow cooking of the cartilage and connective tissues. This resultant gelatin is key to giving expensive soups and reductions that rich "mouth feel". Though it's said to be a very good example of cows feet; I did prefer the more livelier and spicier accompanying abundant rich beans and rice. This is enough food for 2 1/2 meals.

The goat is very popular, with a generous portion of firm, well seasoned meat on the bones. It's chewy rather than tender, and has a little heat with its garlic and touch of salt. It comes with fried plantains-much like tostones, only it instead squashes several plantains together in an elongated pancake, before deep frying, and is then well drained, and crisp. A tiny cup of cole slaw is tucked next to the green salad, and the slaw packs some serious heat! 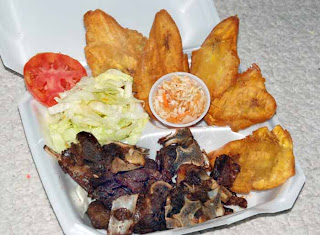 If you come here on a different day, there'll probably be different offerings. Call ahead for the options, or just come in early, and enjoy very tasty authentic Haitian food!

Posted by Ivan Seligman at 5:47 PM

haha i eat here alll the time!!!! if u really want something good try the legim pronounced lay geem sooooooo goooood oh my gosh!!! there is another lil spot in the kmart plaza in golden gate and the best 1 is on bayshore in that plaza by texaco :)