There's something about a restaurant that has a waiting line of people, from 6:00 pm on, every time I drive past. Naples' Carrabba's has been doing a lot of things right, and our service and meal confirmed it.

I called in and made "reservations", or "call-ahead seating" for two people at 6:30 pm, in the tail end of the tourist season. This puts one's name on the waiting list, as if it were done in person, rather than reserving a specific table and time. We arrived, were greeted and given a beeper, and it buzzed and vibrated after only 5 minutes-pretty fast!
We prefer booths, and the seat was well cushioned. Our server was very helpful, and knew all the ingredients of the dishes, so if you have a special diet, you would clearly know what's what. We tested her in a kind way, because one of my friends studied for weeks to pass the stringent waitstaff course and tests. Staffers taste and know the ingredients for regular dishes and specials. All of our hot dishes were served hot, they arrived at the table in a timely manner, properly spaced out, letting my guest and I have an unhurried meal. We even caught a birthday a few tables away, and the waitstaff led the song. (They moved too fast for a good photo-time for a new camera.)
.
Singing Happy Birthday 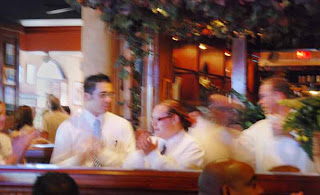 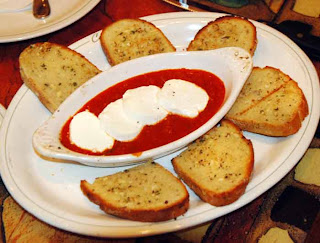 We started with a special appetizer, four tasty hunks of goat cheese in a rich, hot red sauce, with crisp garlic bread, and finished all the cheese, sauce, and the slices of garlic bread. I forgot the name. I'd order it again, if available. Wines are reasonable, you can have a glass in the $5 and up range, which is less than half of what is charged elsewhere in town.
.
Mussels with White Wine, Basil, Lemon butter, Pernod 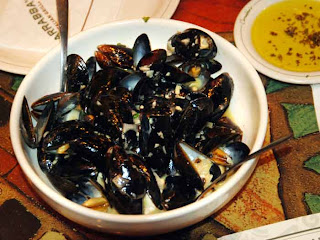 There were no let downs in any of the dishes. The "regular" bowl of mussels ($11) had a generous helping of plump, tender and sweet Prince Edward Island mussels, and the wine sauce with Pernod was ample and rich. We asked for extra bread to sop up all of the sauce, which arrived while the sauce was still warm. Nice. Carraba's is well known for their crunchy, lightly battered fried calamari ($7 or 9), so we've added the mussels to our "must have" list.
.
Pasta Weesie-Shrimp and 'Shrooms over Fettucine 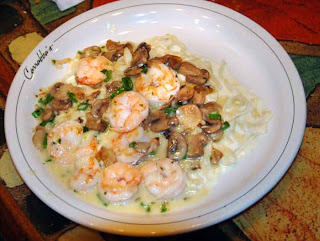 The Pasta Weesie (14), caught my eye, and despite the odd name, it is one of the most frequently ordered main dishes, for good reason. The shrimp are sauteed in a butter, white wine and garlic sauce,just enough to leave them tender, and a generous helping of fresh cut mushrooms is added. This is served over fettucine alfredo. This was half the price, and had all of the quality, of some other Italian restaurants in town. So far, very good.
.
The Lobster Ravioli! 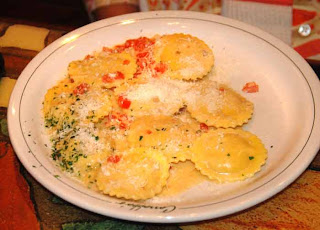 My companion was also in a seafood mood, and ordered the Lobster Ravioli (17). (In some other restaurants, I wonder if the lobster touched, or even "sneezed near" the pasta. I've even found "surimi" and shrimp passsed off as "lobster"in some "lobster" dishes.) At Carraba's , there were actually bits of lobster meat inside the hot raviolis, which were finished with a white wine cream sauce with diced tomatoes. A good size portion for $17. Yes, we shoulda, coulda had a meat or chicken dish to get some variety, but, hey, we had seafood on the brain. Fortunately, while two (mussels and lobster ravioli) dishes had white wine as the base of the sauces, they tasted quite different. Whew!
.
A man, not in the server's uniform, obviously working as hard as the waitstaff, asked other diners and us how our meal was. We said we were very happy, and asked who he was. "Andrew Sansone", he replied, the owner/proprietor of this Carraba's, and on site every day. Makes good sense, when the owner is on site, not much will fall through the cracks. Is there a trend amont national chain restaurants for local hands-on ownership? (We noted this at Flemings, too). He didn't mind if I took photos of the kitchen. The cooks were amused to be photographed, and were too busy to give a second glance.
.
Hearty Cheesecake 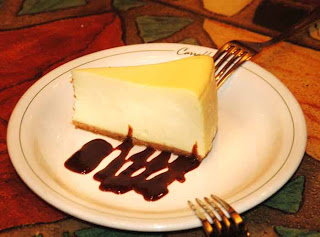 The cheesecake was a generous portion, rich in taste, and not overly dense, making it a great ending to a properly cooked, and very reasonably priced dinner. It's easy to see why Carraba's has a waiting line, most every time I drive past.
.
Five Cooks in the Narrow, Spotless Kitchen 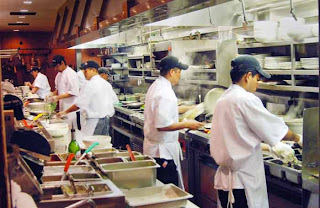 Yes, I like seeing the kitchen, when possible, wherever I go. At this Carraba's, it's easy to walk right up, if you gingerly dodge the waitstaff. It never ceases to amaze me how five or six cooks organize all parts of one or two dozen table's orders simultaneously. They don't appear to say much to each other to do so, and stay out of each other's way, in a ~3 foot wide kitchen corridor.

My neighbors use Carraba's carry- out drive up service more than dining in, during the "season".

.Chill a bottle of wine in the fridge. Call in the order, from work or from home.Drive up, pick up, drive home, and savor fresh cooked cuisine at home on the patio. Pay attention to the sunset's changes- the sometimes fiery oranges and reds, and later pastels, as the sun sets. Each sunset gives such a different progression of colors! Eat well, relax, and savor a simple life at the end of the day. 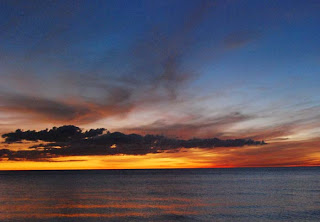 Posted by Ivan Seligman at 9:44 PM

I never tried goat cheese - have to do that sometime! Oh and that ravioli and cheesecake look fantastic! Reminded me I've got some cream cheese I need to use before it expires, thanks!