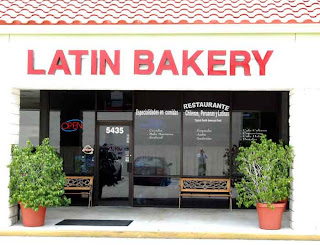 There’s s a lot to be said for this Naples restaurant, serving delicious food and baked goods from Chile and Peru. Tucked well out of sight at the north end of Naples’ Bed, Bath and Beyond Plaza, it has flourished for over 4 years! What's the attraction to so many? Easy! As Pamela says, "Suculentos y variados platos con excelente sazón casera; una fiesta para el ojo!"

With daily lunch specials, it is often filled at noon, primarily by regulars, with occasional "gringos" like me, Señor Gordito, who are welcomed to try some of Southwest Florida’s freshest seafoods and meats, Chilean and Peruvian styles. The Latin Bakery is famous for their wonderful baked delights. Owners Francisco (minding the front of the house) and Jeannette Robles (cook extraordinaire) are warm, and were very helpful in suggesting a variety of foods for us to enjoy. 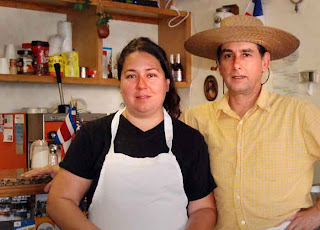 We started off with a pair of complimentary hallullas- a Chilean round flat round bread, accompanied by sweet butter. 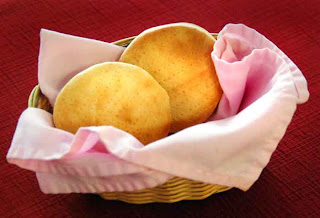 Our thirst was quenched by tall glasses of Chicha Morada ($1.50), a traditional drink made from purple corn cobs (not the kernels), with touches of sweet apple, pineapple juices, and spiced with cinnamon, cloves, and finished with a squeeze of lime. This is the nonalcoholic version.. 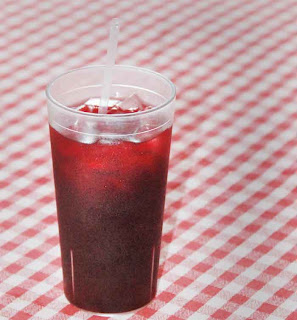 The Latin Family Bakery’s empanadas' quality is legendary around Naples in the Latin community. All freshly prepared. Sample several at these prices! I had the Empanadas Fritas de Pollo-Chicken ($1.75), the molten Queso- with Mozzarella Cheese (1.75), Queso y Jamon-Ham and Cheese, kicked up a flavorful notch (1.75 ), Mariscos-Seafood with clams, shrimp, mussels and fish (1.75 ), and the biggest one, the Empanadas de Carne-Beef (3.50 ), with its chunks of tender beef and slices of cooked onion. All in the below photo. Empanadas are hand made from dough, filled, and, except for the large Beef empanada which is baked, they are briefly fried at about 375 degrees. The light pie-type crust stays crispy and virtually greaseless because of the higher heat. ("Greasy" fried food occurs when fried at only 280-340 degrees, when fried in too large batches, or the oil is not allowed to reheat between batches).

Upon opening each carefully wrapped, crisp empanada, a cloud of delicously scented steam arises, conveying the rich aromas upward; an exciting tease of all senses save one; taste. And the taste? These are among the best my Latin tasters and I have ever had! These are THE ideal empanadas; crisp, light, and quickly fried, so the crisp pastry crust is not soggy next to the succulent filling. These sensual, arousing beauties are a "must try"! 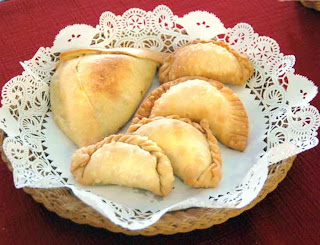 Paila Marina is a Chilean seafood soup usually served in the paila, the traditional wide earthenware bowl. Using a fish stock with a touch of cream and tomatoes, the rich soup contains ample chunks of tender fish, large mussels, scallops, clams, crab claw, small shrimps, octopus, cilantro, onion, and garlic. This is a wonderfully flavored soup, a generous portion of truly fresh seafood, and a "must try" bargain at $13.99. 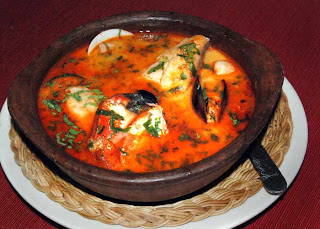 The Ceviche (11.99) is a generous portion of diced fish, marinated in lemon, with chili pepper and cilantro. Throughout South America, other cooks may add touches of bitter orange juice, garlic chunks, and mint. 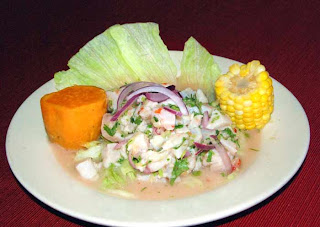 The Churrazco Argentino (15.99) ordered by another table, is a grilled steak, served with rice, salad and potatoes. This was the gentleman’s repeat favorite. 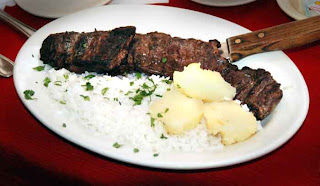 His companion ordered the Lomo Saltado (11.99), rich with sauteed beef, pieces of fried beef admixed with onions, tomatoes, and French fries. The picture below has an added egg atop the wonderful rice, as with the Lomo Montado. 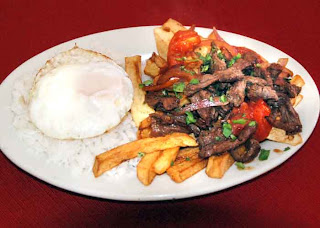 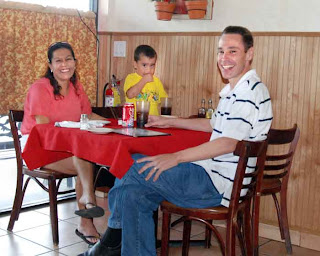 The Capelloti's were starting on Tamales de Pollo (o Cerdo) ($4.25) as we were leaving, and this is one of their favorites. 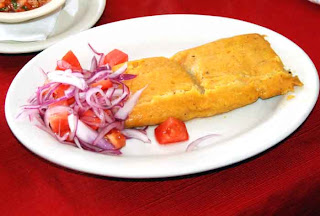 I couldn’t resist a peek into the large, clean bakery/kitchen, and got to see Chef Lenor cooking a flaming dish. 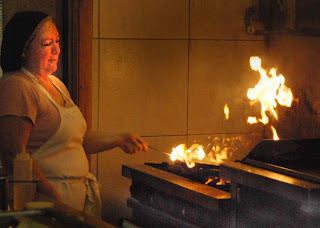 Latin Family Bakery Restaurant, open 11 am to 8 pm, Tuesday through Sunday, in the Bed Bath & Beyond Plaza, NW corner of Pine Ridge and Airport Pulling Road, at far north end of the long Plaza. 239-598-3244

Posted by Ivan Seligman at 6:29 PM

It's the real thing.

So much food, we go home with enough for two meals!
Cover more "off beaten path" places. You describe the places exactly as they are. No surprises.

Best ceviche outside of Peru! Everything I have tried here has been excellent.

My husband and I went to the restaurant today and all the food was excellent, specially empanadas and aji de gallina. We definitely recomend it.

I loved this place. Francisco was really nice and the food was delicious. We definitely recommend it!