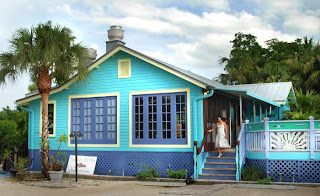 “ It’s just like eating in a Chef'’s own home”, Pamela said, of Sweet Melissa’s Cafe. We had just enjoyed our appetizers, while perched on our window- side seats, looking out on a vivid double rainbow.
.
You could say the same, too, especially while sitting at one of Sweet Melissa’s four wooden chairs directly in front of the wide open kitchen, chatting with friendly Executive Chef Melissa Talmage and staff during a lull in service. Relax, and take in the tropical setting-it’s is as homey as you could ask for, while dining out. It is a warm open setting for the food's subtle sophistication. Yes, relax, savoring the orange-red walls, tile floors, linen table cloths and the luscious tropical greenery filling the window views. We were very happy that we made the journey from Naples to Sanibel, to share in Sweet Melissa's friendly atmosphere. 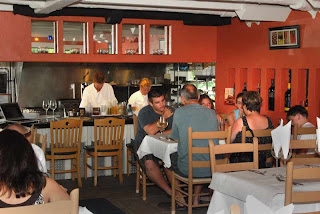 The menu has three parts; Course I, II, and III. The appetizer portions of “Course I and Course II” are an ample size. The entrée’s of “Course III” are listed as being both “half portions” in price and in size, and can certainly be doubled, if desired. We, and other diners preferred the offered portion sizes, as it allows one to sample twice as many entrees for the same price, when compared to similar restaurants. This “European portioning” runs counter to the American meal concept of “super-sizing”. The change is welcome, and easy on the aistline.

It was raining as we arrived; the usual 20 minute summer afternoon downpour. A vibrant double rainbow shone over Melissa’s for a long time, a very good sign from above! We turned from the window, to plan our preferences for appetizers and wine with Server and Wine Steward Marlana Kennedy, who suggested starting with the Watermelon Salad ($9). The salad's mouth sized bites of Mozzarella and Watermelon balls, were sprinkled with Spiced Pecan bits, to offset the fruit’s sweetness, with all arrayed on mandoline Sliced Cucumber Ribbons. A delicate Champagne Vinaigrette dressing offered the right touch of crisp, yet slight acidity. “It’s so creative and beautiful”, Pamela said, noting how the salty small Kalamata Olives complemented the sweet watermelon, in nearly every bite. 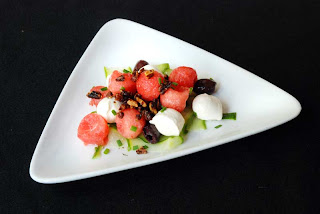 Chef Melissa’s inspiration for the combination? Her daughter, Olivia, put the watermelon, Mozzarella and olives together, and Chef Melissa did the rest! Marlana chose the Honig Sauvignon Blanc to perfectly complement this and our next few seafood dishes, and we were very happy with its light, crisp taste.
The Big-Eye Tuna Tar Tar (12) is a succulent tower of chunks of tender tuna, admixed with tartly sweet White Grapefruit for contrast, with Candied Fennel, and crisp Toasted Hazelnuts, topped with crunchy Frizzled Red Beets, and encircled on the plate with a light Ancho chili Oil. "Delicate and tender" I said. We couldn't think of adding anything to it, without disrupting the rich chords of flavor. 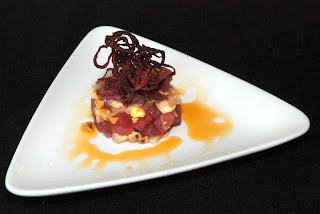 We watched Sous Chef John Plantefaber behind the low kitchen counter, assembling his portion of this and other dishes, and his deft knife skills would be inspirational to any would be chef. 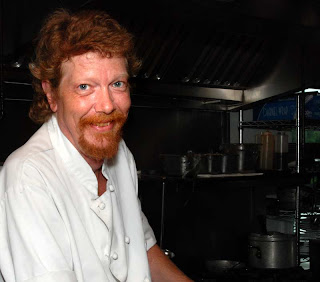 Executive Chef Melissa is superbly trained, a graduate of the French Culinary Institute in NYC. She studied under Kitchen Gods Jacques Pepin, Andre Soltner and Alain Sailhac, then first worked at noted Union Square Café. From 2001 to Hurrican Katrina ‘s arrival in 2004, Chef Melissa sharpened her skills at New Orleans' Commander’s Palace, focusing on seafood, then moved to Black Salt, Washington DC’s 2003 New Best Restaurant of the Year. Jazz Musician and restauranteur Gaye Levine then recruited her in 2007 to Redfish Blufish, also owned by artistic entrepreneur Bridgit Stone. Gaye passed away a year ago, and Melissa has stayed on, operating Redfish as one of the two finest restaurants on Sanibel Island. 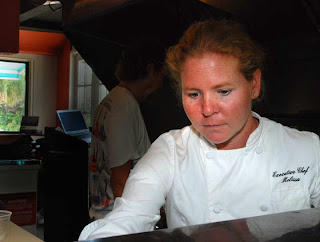 Melissa has concentrated on bringing out the complex flavors of Southwest Florida’s expansive bounty of seasonal local produce and truly fresh seafood. With the name change from Redfish Blufish to Sweet Melissa’s, and the new menu, we couldn’t resist a Fourth of July weekend visit.

The Roasted Grouper (15) is perfectly cooked. Pan seared to develop a tasty crust on both sides, then oven roasted, it is then topped with an ethereally light disk of Shrimp Rum Butter. This is nestled next to the delicately scented Coconut rice, with its admixed crisp English Green Peas. 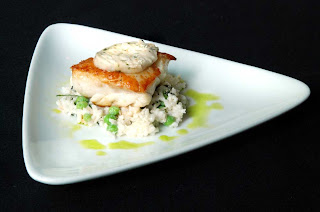 Chef Melissa has elevated Grouper to its tender best.

If you haven’t been a prior fan of grouper when sampled at lesser restaurants, it’s time to try Grouper at is best, at Melissa’s. I could have ordered three portions, it was so good! Oops, time for some ‘splainin, as Luci Arnaz (Ball) would say.
Pamela and I eat like birds, all right. She is the Hummingbird, and I have the Vulturean Insatiable Appetite! Pamela said of our dishes, “The size of the portions are perfect; you can dine with an appetizer and a main course, and feel just right!” I, El Gordito, agree.

Weekend visitors Colin Heard and Erica Hamilton of Fort Lauderdale, sat at the next window- side table, and mentioned they "Googled" Sanibel to find the "Best Sanibel Restaurant". Their research indicated Sweet Redfish Blufish as the "Best" a while ago, and they have been repeat visitors to Redfish/Melissa’s. 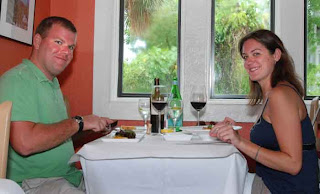 They raved about the Ceviche Trio (14), whose generous portions of seafood changes daily, accompanied by a crunchy tostone style plantain. 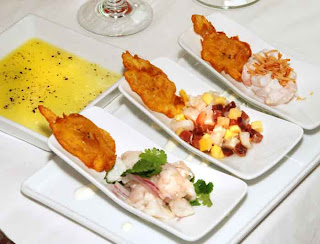 Erica loved the Seared Mahi Mahi (14), a generous portion of fresh fish, served over a Banana and Creamy Lentil Salad, with a Tamarind Broth. Erica said, “So many different favors that match, in every bite” I can’t find such fine quality culinary creations anywhere else in the USA or Europe, for just $14. 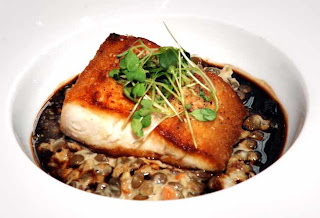 Chef Melissa came over during a brief lull in the kitchen, and shared that some of her favorite cookbook authors include Julia Child for the French basics, Alice Waters for her simplicity and magical treatment of local produce, Eric Ripert of Le Bernardin in NYC, Suzanne Goins, of Sunday Suppers at Lucques, and Nuevo Latino Cuisine Chef Douglas Rodriguez.of Miami’s Yuca and more recently of Patria’s in NYC. 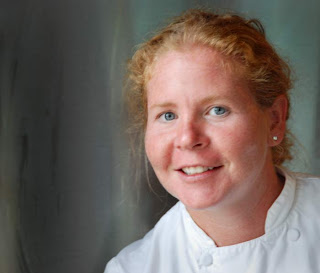 We had the Grilled Hanger Steak (16) for our finale. If you order this, perhaps start with the plate's delicate Yellow Tomato Puree, then sample the Pan seared side of sweet Cipollini Onions and crisp sliced Fingerling Potatoes with Thyme. Mmmm good! Now go for a bite of just the Grilled Hanger Steak, without the other goodies. 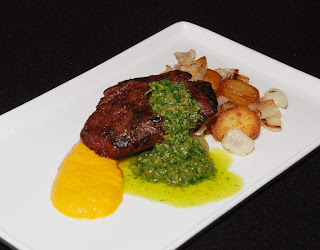 Savor its richness. Now combine a morsel of steak with the steak’s topping of Salsa Verde’s parsley, capers, anchovies, lemon, olive oil and salt and pepper. It’s the best! At $16 for this tasty portion, or a double portion at $32, it just can't be beat. I’ve searched restaurants and butcher shops for the elusive Hanger Steak, and was delighted to have found a great one at Melissa’s. First cousin to a skirt steak, and richer in taste, it is best served rare or medium rare. Marlane paired the steak with a rich Seghesio Sonoma Zinfandel, a wonderful marriage with the rich beef, that couldn’t have been better.

Tastings of small portions of varied appetizers and/or entrees can be arranged, as one regular enjoys ordering different creations, on a weekly basis..

Chef Melissa continues a great tradition with Sweet Melissa’s, offering innovative tasty food, beautifully presented, and at prices that are easy on the wallet. This is a a totally different concept from the 250 seater restaurants, certainly much quieter than say Bubble Room and other tourist watering spots on Sanibel. Like Colin and Erica, we’ll be back for the comfortable atmosphere, friendly prices, and excellent food. 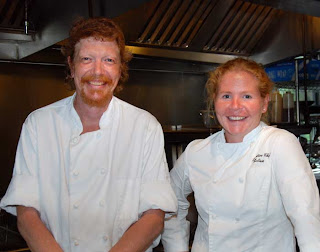 Sweet Melissa's new digs are gorgeous and her food is still the best anywhere south of New York.
There is nothing she prepares that isn't beautifully done and fabulously delicious.
Fantastic experience.

You're guests are obviously made up, anyone who is from Sanibel knows both of those people. Ft. Lauderdale bit?? wow.

I put down the names they told me, I don't check their id's to verify their name!

Glad you and "anyone from Sanibel" are sure of who they really are. Please share their names here, so I also know who they "really" are.