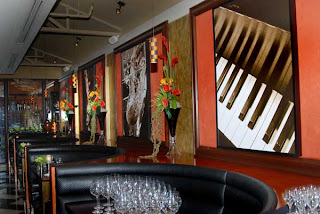 I joined Naples owner Jerry Alajajian’s Handsome Harry’s third Summer Wine Series on Third Street, Aug 26, 2008, and was pleased on every count. There were about 25 guests seated on both sides of an angled long table, and most quickly became friendly with the new faces next to them. The setting is the main dining room-a pleasantly darkened room with black and white marble floor, and tastefully decorated with photographs.

I've enjoyed good meals and live entertainment since 2005 at Harry's, and the food's gotten even better, with Executive Chef Tony Biagetti's fine cuisine. The prior wine dinner featured Napa Valley's Cakebread Cellars. General manager Larry Luizzi, and Lou Bernardi of Southern Wines & Spirits, respectively introduced the food courses and Antinori' family's fine Tuscan and Umbrian wines; a different one paired with each of 6 courses, for $125, plus tax and tip.

There are wine dinners, and there are wine dinners. Some leave you feeling "taken", when given small 2 oz pours of wine with tiny, lukewarm dishes, and you leave still a little hungry. I’ve gone to quite a few wine dinners, and the setting and quality sure varies! Another popular venue has one sitting in closely packed rows, much like being in a classroom. Then, the food that is paired with the wine may or may not go that well. Finally, the wine itself may not be the best quality for the generally $80, up to $125, for the entire wine dinner, plus tax and tip. Fortunately, there are ones like Handsome Harry's, where there's an abundance of fine wines and uniquely tasty foods. The better wine dinners leave smiling, already sure of the date of their next wine dinner to attend. Patrons at Harry's told me they got more than they expected, in food variety, amount, and quality of wines, for this dinner. 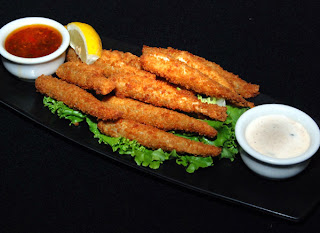 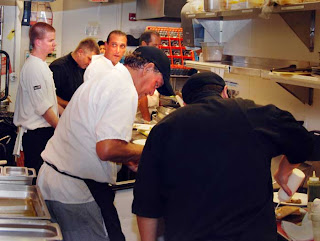 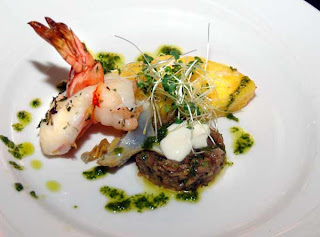 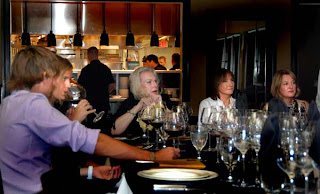 The Third course was Maine lobster claw, with risotto studded with lobster bits and porcini mushrooms, and a fried leek garnish, paired with the light and fruity Cervaro Della Sala Chardonnay, from Umbria. 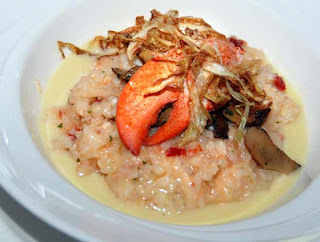 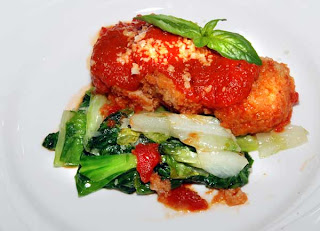 with prosciutto, paired with two different super Tuscans for comparison- the Guado al Tasso ’06, and the more expensive Bolgheri Superiore ’04. I and my companions were fascinated by comparing the two wines initially, and over time, as they breathed. We switched from one to the other as favorite, and learned quite a bit about how wines can change in just 15-30 minutes in the glass! 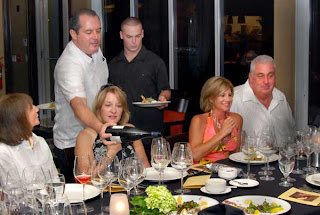 The Fifth course paired a rich Marchese Antinori-Chianti Classico Reserva ’03 with Spinach and pignole stuffed loin of veal with gorgonzola essence jus and herbed gnocchi. This was the only “just good” offering of the night, as the meat was a touch overcooked.

The Sixth course was Aged Marsala Zabaglione with fresh berries, 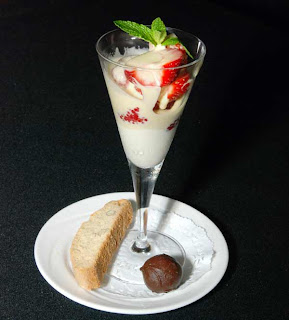 paired with the Tuscan Antinori Vinsanto, '03, a balanced treat, much like a tawny Port.

I learned much about the unique tastes of the Italian wines, what grapes made a “super Tuscan” wine (first created by Piero Antinori in the 70’s!) , and learned about the Brunello problems at other vineyards where the expensive wines labeled as 100% Sangiovese-based wines were surreptitiously boosted with Cabernet and Merlot grapes. The guilty were caught by using DNA testing. The next tasting dinner is October 7, with Duckhorn Estates. Check it out!

Posted by Ivan Seligman at 9:48 PM