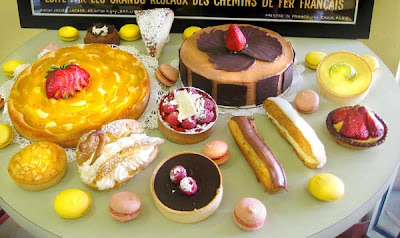 Run, don’t walk, to the French Bread Oven, to have the very best breads and pastries in SW Florida. Each is a perfectly baked delight, with all the nuances just right, to please the pickiest French or American customer’s palate. Never had French pastries? Take home an assortment, and you’ll be a convert at first bite. This is a gem. 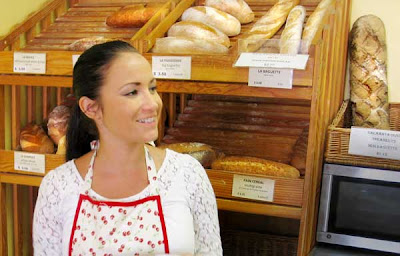 Two months ago, the ten year old French Bread Oven was rejuvenated with new owners and baker, overnight becoming a South Florida center of excellence. This French bakery is in excellent, well floured hands! New co-owners Eric and Tomasina Truglas took over the spot, bringing in new counters, some new baking equipment, classic recipes, and a zest for baking. 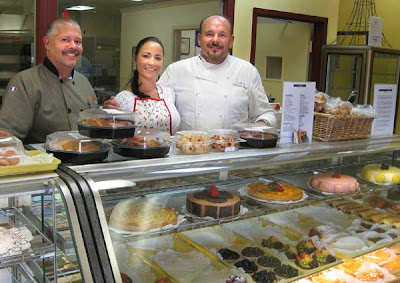 Co-owner and master baker and pastry chef Andre Gratesol’s creations, both classic and novel, would be snapped up like hot cakes, er, croissants and clafoutis, in France. Adding more than just bright new painted walls, Chef Eric modestly says,“ We bring a new vibe to the place.” It’s wonderful! Three French customers heartily agreed, as they tellingly left with large boxes of pastries and two loaves of fresh artisanal bread. 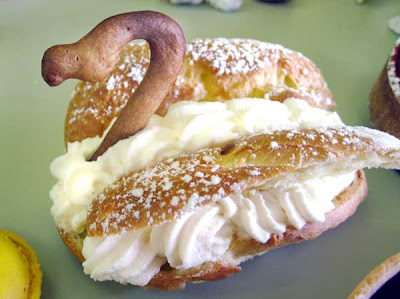 Chef Eric Truglas, a Paris native, previously oversaw four restaurants at Sanibel Harbour Resort, and was director Food and Beverage at Bonita Bay Club in Bonita Springs. He is active in the annual Southwest Florida Wine Fest, and he’s published a cookbook “Southwest Florida Cooking With a French Flair.” Active in Slow Food Southwest Florida, a chapter of Slow Food USA, you can meet him and baker Andre Gratesol Saturday mornings at Naples Third Street South Farmer’s Market, now open all summer. They also are at Fort Myers Farmer’s Market for weekly events.

Entering, I walked past a romantic 20-something couple having lunch at an outside table. Paul McDermott, head of sales and jack of all trades, and Tomasina Truglas greeted me with smiles. A French customer on line ahead of me said, “This is like coming to a great shop in Paris where the baker takes pride in baking and putting out only his best. Do you prefer croissants, marcaroons, perhaps an apricot or peach pastry (below)? 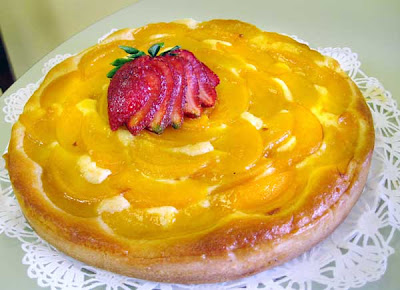 We are getting an assortment for our guests, so they can choose. This baker is way better than the previous baker.” That’s a solid vote of confidence, and I second it. (Truth be told, I brought home fourteen desserts, to share with friends.) 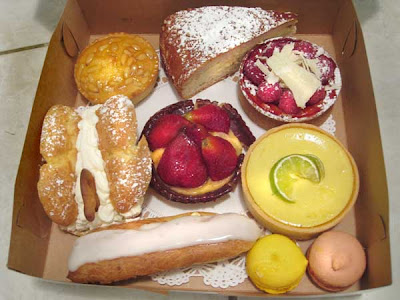 In the top center, above, is a Tarte Tropézienne. Blogger :Pastry Studio, a wonderful baking resource, writes that "Tarte Tropézienne is not really a tart at all, but rather a disc of brioche that is sliced and filled with cream Recipes for the filling vary considerably and include buttercream, mousseline (buttercream made from pastry cream and butter), pastry cream and cream diplomat (pastry cream lightened with whipped cream). Almost always the cream is flavored with kirsch." http://pastrystudio.blogspot.com/2009/04/tarte-tropezienne.html

The selection is divided into Breads, Viennoiseries, Pastries, Whole Tarts and Tartelettes. All are amazingly well priced for the high quality. 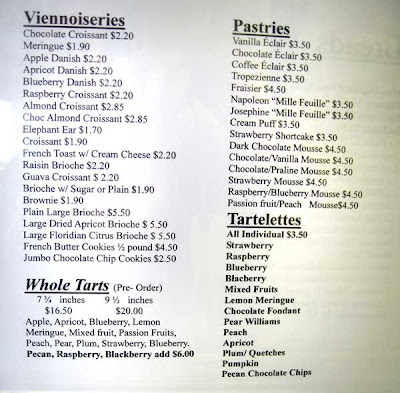 A raspberry croissant for $2.20, raisin brioche 2.20, large dried apricot brioche 5.50. The famous brioche and cream Tropezienne, or éclairs for 3.50, Napoleon “Mille Feuille” 3.50, dark chocolate mousse or passionfruit/peach mousse 4.50. The beautiful tartlettes, be they 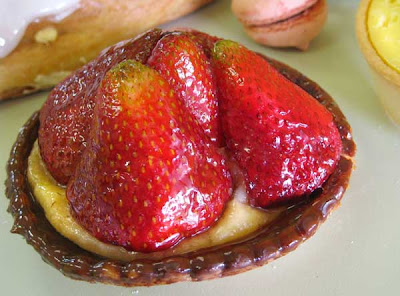 strawberry, raspberry, blackberry, mixed fruit, pear, peach or plum, are 3.50 each. Scrumptious! Need a larger dessert? Whole, large tarts with every sort of fruit are $16 for 7 ¾”, and 20 for 9.5”. Chocaholics have Jumbo chocolate chip cookies for 2.50, and lots of chocolate goodiesliek the mousse pastry below. 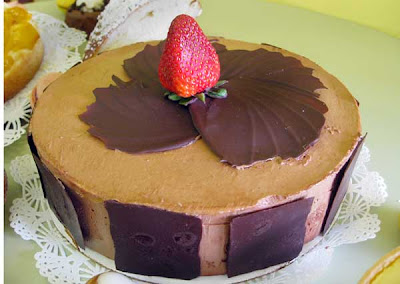 Lunch is a steal! For an unbelievable $4.95, have a favorite French Quiche Lorraine with natural Swiss cheese and dry cured bacon in a cream cheese pastry and firm flaky crust, Fougasse (a mini pizza), Croque Monsieur, Le Parisien, or a Tomato-Ham and Mozzarella on a mini baguette!

The Breads are a crowning glory, with perfect crust and tender inside, 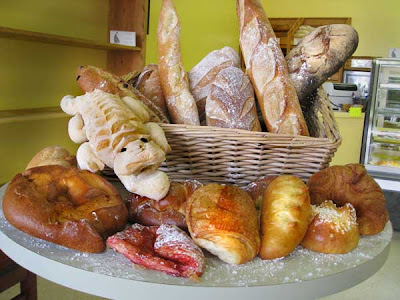 Andre Gratesol is clearly THE master baker. As Eric says, “If you want a taste of France, come here for French music, and practice some French.” The French Bread Oven is on East Tamiami Trail’s north side, just west of St Andrews, and about half a mile east of Rattlesnake Hammock Road, in the same shopping center as Eurasia. It’s well worth the drive. 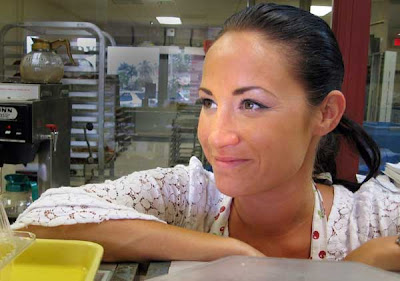 NOTE: THE FRENCH BREAD OVEN HAS CHANGED OWNERSHIP.
THE TOP BAKERS, ERIC AND ANDRE, ARE NO LONGER THERE.
THIS REVIEW DOES NOT APPLY AT ALL TO THE NEW BAKERS, AS I'VE NOT TRIED THEIR FOODS.
Posted by Ivan Seligman at 7:39 AM