.
She offered me her forbidden fruit, a warm, light brown orb, and gently did I take it.

I have long known about balut. My Thai acquaintance, knowing my varied culinary interests, smilingly held up the brown egg, saying “This is balut. Do you want to try it?" Balut is a fertilized duck (or chicken) egg, boiled, then eaten. It’s a Philippine delicacy, also treasured across Asia, under other names. A fertilized egg is incubated in warmed sand , and often cooked and consumed on days 16-18, depending on how advanced one wants their embryonic prize to be. I took the warm egg home, wondering “Ok wiseguy, what are you going to do with this now?”

I didn’t ask the egg’s age. My parents didn’t raise me that way. It sat in the fridge for two days before I got around to researching, and cooking it. I’ve heard both sides of the balut controversy. To a balut aficionado, it’s a wonderful family tradition- fresh, natural, and free of preservatives. It’s can be used as a test, to see how a potential mate reacts to a cultural icon. To others, it’s primeval, repugnantly taboo. Some affirm humans should eat only things with roots or chlorophyll. I told myself- whether ingesting an embryo, pullet, magret, gizzard or old fryer, I'll be eating a unique form of poultry, and certainly not ingesting a bug or alien. I held the egg in my hand, hesitant and nervous about its impending taste and appearance. 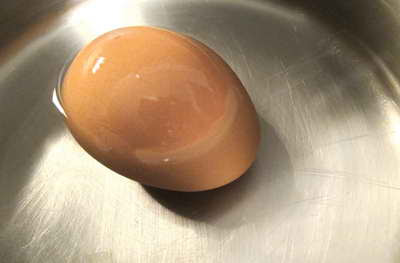 Joy of Cooking somehow left out balut recipes, as did other cookbooks. Googling “balut cooking” wasn't helpful- boiling times varied from 15 to 40 minutes. This egg was smaller than most duck eggs, so I warmed up water, put it in, and boiled it for 20.” I gathered salt, sweet chili dipping sauce, white vinegar, a Meyer lemon, and bagel chips, to better see what would best fit with balut. Sipping on a Chardonnay, I also had a cold beer at the ready. 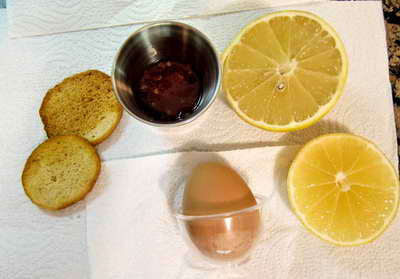 Twenty boiling minutes passed, and the intact, inscrutable egg calmly faced me, silently daring me to open its secrets. Would I face a tiny blob, or worse, a feathered and footed apparition? I set it in an egg cup, (incorrectly) pointy, smaller end pointed up. Tapping around the egg, I opened it toward the top, removing the resultant round “cap.” I gingerly took a sip of the warm, clear broth within. Not bad. I added a pinch of salt, and downed the rest of the broth, in a shot. It was tasty. “Tastes unlike chicken,” I thought. Attached to the cap is a nut-hard, clearly inedible concave disk of cooked egg white (below, on right), unlike anything I’ve seen. I set that aside. The disc of soft yolk looked up at me from within the shell. 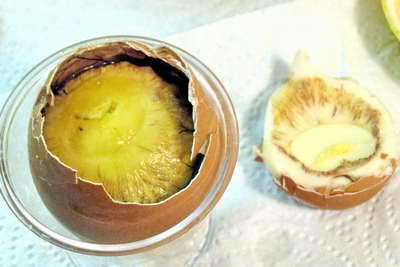 Gingerly, I turned the yolk over, and an embryonic blob, half the size 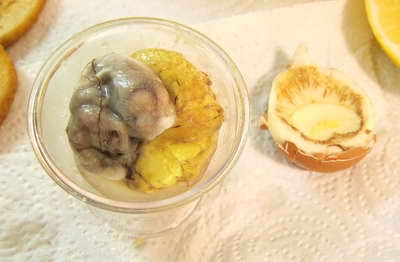 of the yolk, was attached. "Whew, no feathers or feet,” I thought, “dodged that bullet. ” Still, at some level, I was not prepared to see this. I hesitated, put a dash of salt and lemon juice on the pair, and took a nibble. “Hmmm, Not bad.” In fact, it had a pleasantly rich foie gras taste, and unique creamy-solid consistency. The next mouthful was drizzled with Thai sweet chili dipping sauce. Its strength covered up the delicate taste. Another bite, and the balut was history.

The thought of eating a cooked embryo, rather than a whole chicken, can stop a grown man in his tracks. That thought just as easily propels other men or women, balut aficionados, to eagerly reach for the egg. I hesitated before "breaking" a Western taboo of eating "gross," or “weird” food. I try to appreciate another culture’s delight. While I could name lots of other proteins I’d much prefer, I could try balut again.

Oh, just one request, please. No “feathers and feet,” for this old bird.

My mother moved to Naples three years ago and I have been devouring the food scene here ever since. I love the restaurants, particularly the hidden gems in strip malls, and the butcher/seafood shops are excellent.

I write a cooking blog focused on offal, odd ingredients, and different takes on traditional dishes at www.thepeteison.com

Anyway, I just discovered your blog and love it! Any chance you can recommend your top 5 adventurous, authentic, well priced, restaurants within 45 minutes of Naples? You can either comment on my blog, direct message me at @thepeteison on Twitter, or just reply to this and I will come back looking.

Will definitely add you to the blogroll on mine, this is great stuff and would appreciate the recommendations.