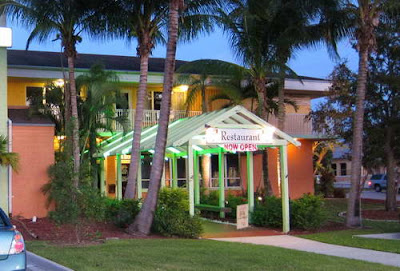 A new Indian restaurant in Fort Myers! My Indian food lovers and cooks said “Pack the car, we’re gonna give their Rogan Josh and Kulfi a try!”

Nirvana Fusion opened in October at the former site of Metropolitan and Black Hawk on College Parkway.We arrived at 6 pm, and by 7:30 nearly all seats were filled. 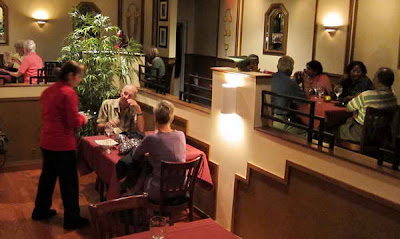 There’s actually 4 separate parts to this long, large complex-we were in the elegantly simple dining room at the south end, entered via by the pointed awning. The dining room has a display of wines and beers on the left, and the two-level dining room is on the right. 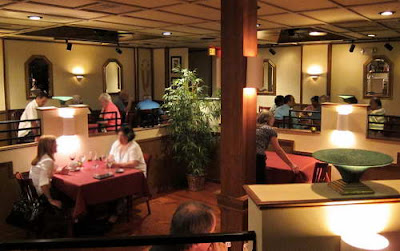 It is is relaxing, with attractive chairs and tables, and no Indian tchotckes or gods peering down. The indoor greenery is nice, and the lighting is fine for romantics or friends. Low volume music is calming. Owner James Rajiah had his thinking cap on in designing this from the elegant menu to the simple décor and harmonious use of lighting and music. Open only a few months, it’s succeeded on both accounts.
We were promptly seated by our red jacketed server, and chatted with her. A few minutes later, she seemed as if she didn’t remember us. We did a double take, and she solved our puzzlement-because the red jacketed server is/are twins, Louisa and Dora, here with the sous chef! 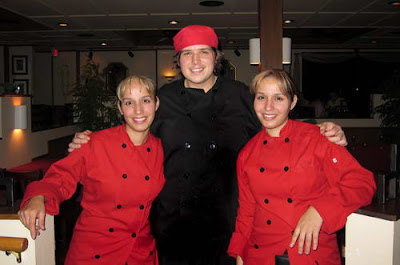 An Indian meal’s spices demands an Indian beer, so we had Singha and Taj Mahals. 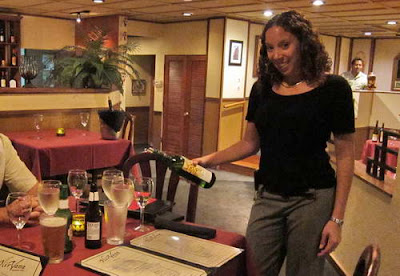 The Naan Bread Basket ($6) has several good sized pieces of what looked like pita bread, and a nice dip. Naan is usually served with some slightly charred spots; this had some browning 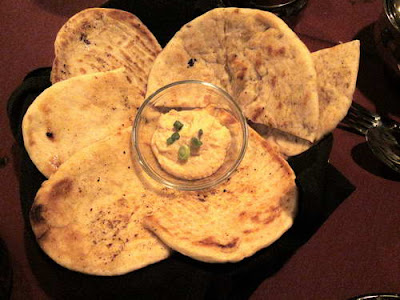 and was ok for pita bread, but not authentic naan. It’s clearly not made in a traditional Tandoor oven, as it lacks thick and thin areas, scorched marks, and the characteristic texture and taste are just not there. There’s not much taste difference between the plain, garlic and onion naans-I’d recommend another appetizer till a tandoor is purchased. 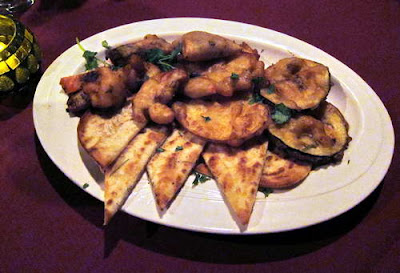 three chutneys. I liked the eggplant, the other items are nicely fried, and I left the naan behind. Overall, a good introduction to the cuisine.

My Butter Chicken ($12) is just that-tender chunks of breast meat simmered in a moderately (for Americans) spicy blend of tomatoes, garam masala, onions, garlic, chilies and spices. I poured it over my rice, there was not a separate plate for this. 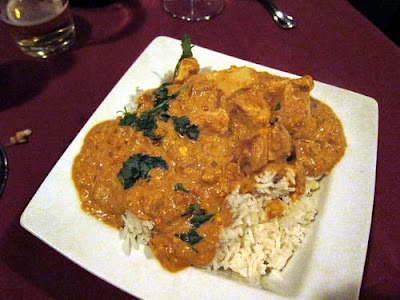 This was my favorite of the evening. Recommended.

The Rogan Josh ($12) was requested to be spicy hot, and it arrived right on target. The sauce was rich and nicely blended. The lamb was overcooked, and there could have been a couple more pieces to be more pleasing. The spice blend is spot on- a very good test of a cook's competency to balance and blend. We commented, and trust this will be improved in the future. The prices are right for the quality and quantity.

Vegetarian Navarathan Khorma (7) is different in that it has the crunch of green bell peppers and other seasonal vegetables. It’s spicing mixture is completely different from the other three 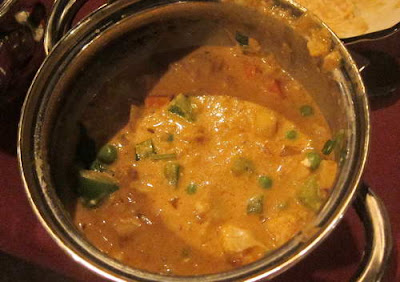 dishes we ordered. There are six vegetarian dishes, and quite a few more could be made upon request. I’d try the Vegetable Biryani (11) next time, or the Aloo Gobi (7).

For dessert, while they ran out of kulchi, the typical Indian ice cream, so we tried regular ice cream 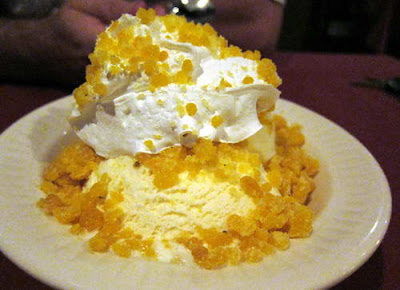 with laddu, a tasty rich sweet mix of ghee, flour, and sugar syrup, and were very happy. Highly recommended.

There were glitches I’d expect in the first few months, and Dora handled each efficiently. That’s what I look for-an experienced, competent staff knows how to make any meal a good one for the customer.
One table had a birthday party; they they were very pleased with the food and service. 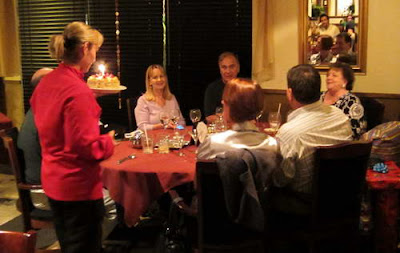 Indian food in India, and parts of London or NYC for that matter, is traditionally served “hotter” than by American standards, and nearly all restaurants in the USA, outside of Indian enclaves, “spice it down” for the American palate. You can spice it to any level desired. The couple at the next table, ordered their food “not spicy.” One ordered the very same Butter Chicken that I enjoyed. At the end, the man made a big deal about how it was overspiced and unbearably salty, emphatically stating they could not eat it at all, so he wanted it written off the bill. He added “We won’t be coming back.” Not a problem-Dora nicely handled it. Curious, after they left, I lifted the lids on their food –they had picked out all the chicken, and consumed well over half the sauce! Oh how they must have suffered; with every tasty, free spoonful! The couple’s scant remaining food indicated they did not go away hungry, or terribly dissatisfied. Takes all kinds...

Owner James later said that the chef cooks with a touch of the Chennai / Madras style, not the more common Gujurati, Kashmiri, or the less commonly found spicy Keralan style.
A good test of an Indian restaurant is how many Indians come, as most cook at home. One Indian diner said “He did a quite fair job, and should get credit.”

Another table of 5 Indians, clearly first timers here, indicated they were pleased with their food. Canvassing two tables of diners knowlegeable about Indian food in the States, one table felt this is good, and the best Indian restaurant of the four in SW Florida. The other table found some dishes to be hits, and others misses, and still they'd return. Two knowledgeable tables of diners, two different opinions. That polarization on the same night, with the same chef is not that uncommon with Indian food, given the different versions of “Indian” people are used to, and their own preferences. The food is much better than Bonita Springs’ Passage to India, and the setting and food are nicer than India Palace. After dinner, we walked around the complex. There was very good live music 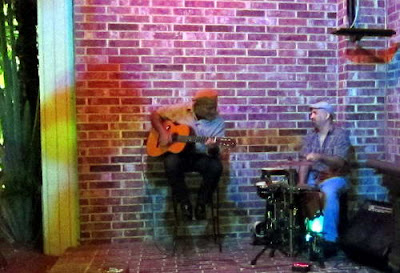 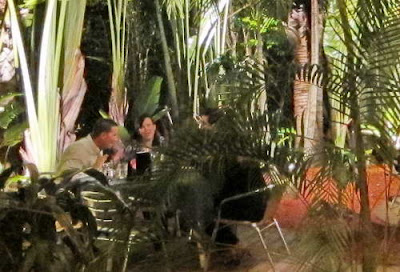 I’d come back for drinks and appetizers here anytime! There’s a large bar with friendly 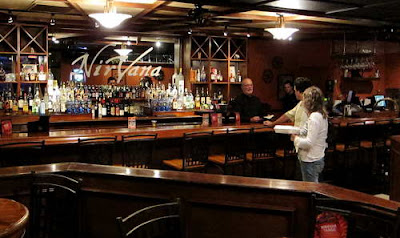 bartenders-one of the nicest bars in town. 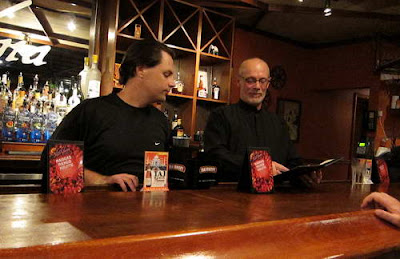 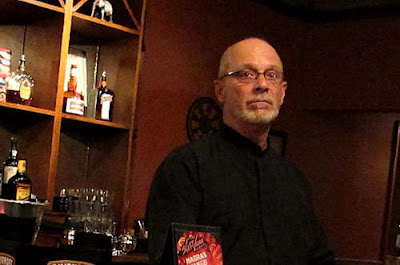 At the end of the complex is an area suitable for corporate or family banquets.

There are kinks to be worked out, as I’ve heard service can be extremely slow on some nights. I’ll be back for the $10 lunch buffet-people rave about the quantity, variety and quality. Thankfully, I really didn’t find any “fusion” at Nirvana Fusion, as the Indian and the Thai dishes are kept authentic, and not blended. I know a nicely priced, good Indian spot when I taste it.

.
One of the twins with Owner James Rajiah. 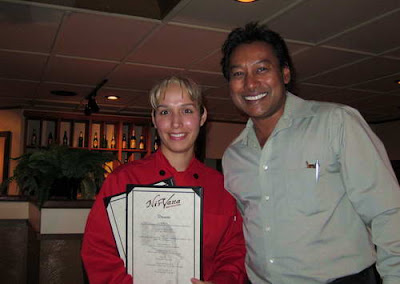 Wonderful food in a great atmosphere! Loved everything about it!

I loved your review! My husband and I have been considering going to this restaurant for a while but just haven't gotten around to it. Do you, by chance, have an update to add now that it's been here a year? We have dietary issues (gluten sensitivity) and tend to be cautious about going to new places, but I love Indian food and your description gave me some trust that the owner/chef/waitstaff may be capable of handling it.

I have a "review" of the music side of Nirvana-they have almost daily concerts and different musical events well worth attending on my September 17, 2010 blog entry. Go to their website for current music offerings.

I've been back to Nirvan Fusion since my original post, however didn't do another post in less than a year. Generally, when I return to a place (especially if no real change in quality) I don't write more, as it can take 4+ hours for each post's writing, photo editing, and my slowness on a computer! And yes, I return to a few spots twice, to even 8 times in a year!

The food is still very good. A call ahead of time should guarantee a gluten free meal.