The Art of Being has closed, before I could get my blog entry up. 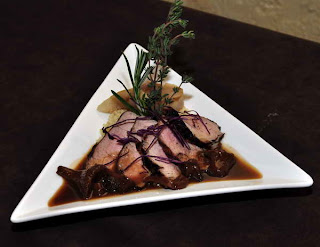 This has been one of my favortie spots for its fine food, warm setting, and great live music. Chef Charles Bartholf crafted beautiful dishes, all $10 and under which were beautifully prepared. Manager Tracy Bedford took great care of the front of the house. Bands like Little Eddie and the Fat Fingers, acoustic guitarists, and cabaret singers were some of the entertainers.
After 3 months of business, Art of Being suddenly closed. The expense of fine food and entertainment was more than the revenue of the off season was bringing in. Could there have been, ahem,  another "hidden" expense? 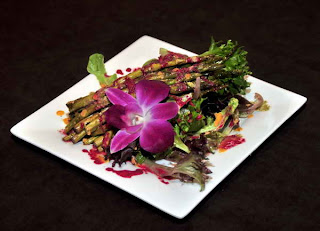 Today in the Naples Daily News, I learned that a closed circuit TV caught former employee Dean Vincent Forte, 44, of the 700 block of 93 Ave. N., entering the closed restaurant, and he was arrested Friday. About $500 worth of liquor was missing that day, and some of the vodka evidence was recoverd at Forte's nearby home. Apparently he made an unauthorized copy of a key before leaving their employment. One writer to NDN's on line article, "Naplesregular", said, "Re: Dean Forte, AKA thief for the rest of his life, this restaurant is a small business trying to make it. You are just scum. Chew on that awhile." 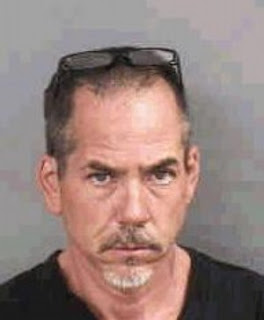 Dean Vincent Forte arrest photo from Collier County Sheriff's Office, via Naples Daily News. Article at:
http://www.naplesnews.com/news/2010/jun/26/man-suspected-stealing-liquor-former-employer/
***ADDENDUM 10/17/10***
Little birdies suggest that Equity One, the landlord that owns over 150 shopping centers, knowing of the months-long delays in getting permitting that led to a later seasonal start, chose not to cut any break to Art of Being, by restructuring rent as the restaurant was going into the slow summer season. Without a break (which many landlords offer struggling tenants these days) the restaurant revenue could not cover the note over the summer and had to close. I feel Art of Being could have been successful with brief rent restructuring until the season started.
Over the past couple years, I wonder if Equity One has chosen to do minimal advertising/marketing assistance to put the Pavilion's merchants in the public eye, to better compete with the well funded Mercato shops. Maybe Equity One needs to maintain a tax loss on the books, or let the property go down the tubes and later be able to put up a more profitable complex later? Their current management practice certainly does not seem like the best use of the property.  Equity One-how about your thoughts and dynamic turn around plans for the future?
Posted by Ivan Seligman at 2:56 PM

Labels: An Insatiable Appetite, Art of Being