Taco Mix in Bonita Springs, and Some Nearby Mexican Spots 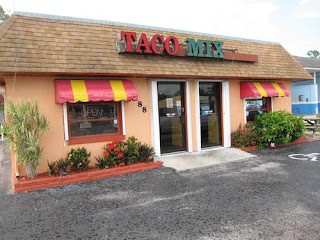 Taco Mix is one of those places that’s hidden in plain sight. You may have driven by it on the north side of Bonita Beach Road, about a mile west of US41 numerous times, and its existence just didn’t register…until now. It's across the street from A Table Apart. It’s said to have the best Cuban sandwich in SW Florida. I’ll check that out on another visit.
Walk in (closed on Mondays) anytime, for breakfast, lunch or dinner. This family spot is run by a friendly group. Lots of families come in as regular customers. Affable Daniel Hernandez will greet you, let you look at the large print menus over head for while, and take your order. Chef /owner Yadid Caceres works his magic on the grill.
Daniel Hernandez and Yadid Caceres 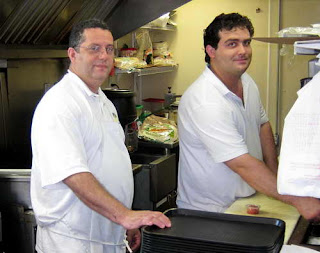 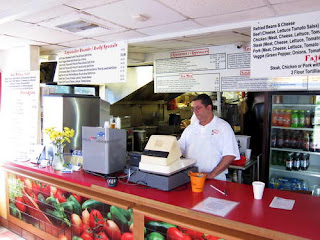 There may be a line of folks ahead of you who are happy to tell you their favorites! One man  comes here weekly from Orlando for business, and this is one of the two places he dines at. The other costs three times as much for a meal. When I stopped had dinner, a Mexican family of five and separately, a Midwestern USA family of four were happily dining. The place seats 44 folks at tables and booths.
A Taco Ardiente stand was originally here from 3-10 years ago, manned by  Daniel Hernandez. He bought it 3 years ago from Taco Ardiente, ramped up the authentic Mexican quality, and added Cuban fare. He and now primary owner/son in law/ chef Yadid Caceres have been delighting regulars with their very tasty, rich cuisines of Mexico, Cuba, and some Tex-Mex.


Kick back and order 3 Mexican kitchen tacos; that is, have three different meats, separately in wonderfully soft corn tortillas, and a bottle of Mexican beer-all for under $10. The bottled cold Mexican beers are $2.75 and domestic beers are $2. 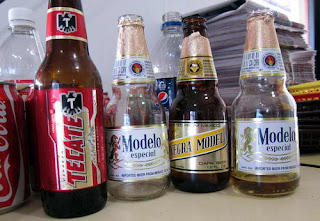 I recommend the carne asada/grilled steak, al pastor/marinated pork with pineapple and orange juice and the barbacoa/shredded lamb. 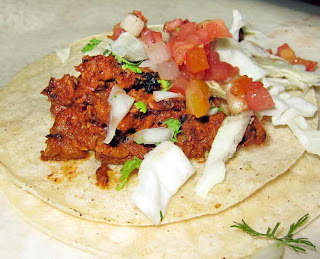 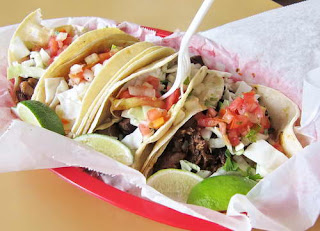 Mmmm, the soft tortillas are as homemade as by a master-fragile, ethereally light and good! I lived in Texas for a four years, and this is as good as it gets at those funky, almost “no-name” family spots that draw 80% or more fellow Mexicans as customers.
Burritos are $2.50 with refried beans and cheese, and under $4.80 for Beef, chicken, steak, pork or veggie.
.
Still Life with Burrito and Hot Sauce 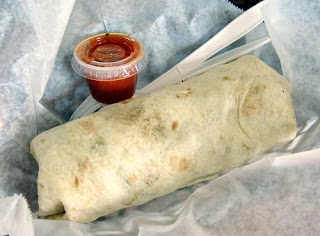 The $5.79 quesadilla is made of steak, chicken or a pulled type pork, placed on a 12” grilled flour tortilla that’s stuffed with cheese and served with lettuce, tomato salsa, sour cream and guacamole. My pork quesadilla is very tasty, head and shoulders above others I’ve had. 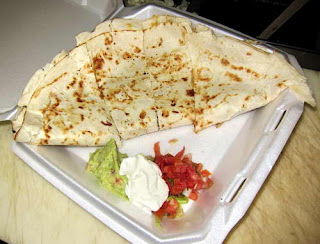 Other friends rave about the Cuban platters for $5.99-platefuls of white rice, black beans and choice of masas de puercos/pork chunks, picadillo/ground beef, or ropa viejo/shredded beef. Their Cuban sandwich, with ham, pork, Swiss cheese, mustard, may and pickle on warm flattened Cuban bread is a feast for $4.65. Cuban friends say it’s better than that served in Miami or Habana. Yes, that good.

I complimented Daniel on the tortillas and breads. They bake them on premises from scratch, as they do about 98% of everything in the restaurant, even the little vials of hot sauce. The hard taco shells are good enough to eat on their own. They are better than any I’ve ever had, crisp, and with a hearty unique flavor that makes it hard to just have one. 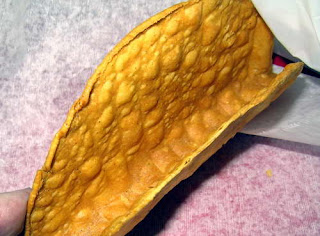 Breakfast is very popular, with items like the $4.50 steak burrito (3 scrambled eggs, steak, onions, cilantro, cheese and tomato salsa). The Mexican sausage burrito is just as popular, with chorizo, instead of steak.
Taco Mix is held by quite a few Latinos (y Latinas) as one of the best in SW Florida for Mexican tacos, tortillas, burritos and other items. Competition? Taqueria San Julian, the A-frame red spot on the SE corner of Bonita Beach Road and Old 41 is certainly good with tacos. It’s more of a hole-in –the –wall when it comes to, um, décor -or lack thereof, with its unique authenticity-(including a shrine to the Virgin and wide screen TV’s with Latin programs). By the way, the food and atmosphere is better at the Bayshore Taqueria San. Julian.’s location. Taco Mix’s taco toppings have a bolder more complex and savory flavor, when compared, taco to taco, on bistek, chicken and al pastor. Taco Mix’s actual taco’s tortilla is wonderfully light-a treat! Taqueria S.J. is known to run out of items-giving you less variety of their already limited variety. Taco Mix’s tacos are about the same size as Taqueria. In Taqueria’s favor, the price is routinely only $1.50, compared to Taco Mix’s $2.00. Tortilleria's $ 2.50 ceviche is a must-have! Taco Mix beats Bonita’s Tortilleria hands down on having MANY more items to choose from, and also on service attentiveness. While my server at Tortilleria could speak very little English, it isn’t a real problems as the menu is in English. Bonita Spring's Tortilleria La Rancherita is just below Taco Mix in taste, and above Bonita Springs' Taqueria San Julien.

I just tried tacos al pastor at La Fogata at US 41 and Bonita Beach Road, which gets great reviews from foodies. There's a choice of corn ($2.25) or flour ($2.50)  tacos. My taco was as good as Taco Mix's-they are neck and neck for the best of  autentica comida Mexicana in the area!. I also had the very large Chile poblano relleno de queso, and while it's not served crunchy as others I've had, its cheese is divine! Maria’s on Old 41 by the Alligator Farm is a significantly more upscale Mexican spot that’s in a different ballpark as it’s primarily a restaurant, not a taqueria (a taco and burrito specialty shop).. It’s always been a delight for my dining. Tourists in the Bonita area flock to neon-green gaudy Iguana Mia for Americanized Mexican-esque mediocre food. Ugh, pass the Alka Seltzer.
I’ve not yet tried the Cuban delights at Taco Mix-they are as highly regarded. Dine in, take out, or even use the drive thru. They take major credit cards and also offer catering. It’s hard to spend over $10 overall on a very filling dinner, especially when the most expensive item is $5.99!
4288 Bonita Beach Road, Bonita Springs, 498-9117, Tuesday –Sunday.
Posted by Ivan Seligman at 11:37 PM

La Fogata has terrific guacamole. The salsas they serve with it are extraordinary. I've had mixed results with the rest of the menu, but they certainly are sincere in trying to put a good product in front of you. They are also very cordial, and though I'd prefer being fed well with poor service to being served crap with a smile, service DOES matter.

Anyone who relishes Jean de Florette/Manon of the Spring, Faulkner and cookery earns my respect!

I cut servers a break as I was one in a former life...and sadly service in SW Fla is too often on a lower plane than in other parts of the country.

Today I went to La Fogata and the owner chatted me up, as he saw I was listening to the TV, and asked about my Spanish. The server was helpful. The Mexican soap on the tube was entertaining. I'll be back for their guac. I make mine kinda chunky with some jalapenos, good use of fresh lime juice, red onions and a squirt of tequila!

Hmm, I need to try out those places. I really like Flaco's in Naples on Tamiami Trail. The chips and salsa are better than the competition, and the food is really tasty. I usually get the chicken chimichanga.

I was reading the header for your blog--I've been to the Islets of Langerhans myself. Got tired of eating nothing but sweetbreads.

Yes, the Islets are a small vacation spot. Their unique cusine does not appeal to diabetics...

As to my favorite restaurants down here, I've only been here since the first of the year. Our busiest season is the time during the first four and one half months of the year, so I'm only now getting a chance to explore.

So far, I'm disappointed in the sushi. Seems odd that it's so hard to find really good fresh fish down here. I'm spoiled by years in New England, I suppose.

I was taken to Blue Provence a couple weeks ago and was frankly disappointed. Most of the dishes seemed to have been cooked with the perfunctory technique that people who have limited experience have--wan sauces, over-cooked sweetbreads, tuna tartar that was more filler than fish.

I ate at Antonia's when I first got here, and was impressed with the fact that everything was seasoned perfectly. Went back a couple weeks ago and ate at the bar: the experience was not bad, but not quite what it had been at first. I understand that eating at the bar is different than in the dining room, but the food should still be of high quality. It wasn't bad but I was a bit disappointed.

I am most disappointed by pizza down here. Of course, I had been living in New Haven, CT, and Frank Pepe's pizzas are justly famous. I didn't expect to find anything of that caliber, but cripes, does it all have to be soggy?

You asked what I liked, and I told you mostly what I didn't like, sorry. As soon as I have more positive results, I'll send them along.

I've eaten at a lot of spots outside of SW Florida, and too often, corners are cut or bulldozed, and authenticity is soon dumbed down to meet steak and potato Midwesterner's blander palates, so the restaurant can survive and dish out mediocrity.

The Mexican cooks at Blue Provence can be hit or miss with the Cariot's cuisine-at the special's price, most people seem to care less, as long as it tastes better than something out of a can.

Try Inca's Kitchen for Peruvian, and Escargot 41 for French as it was at its peak 50 years ago, from scratch. Teh chef/owner personally cooks each dish. Hope you like Bert's Seafood on 5th for Cape Cod style offerings.