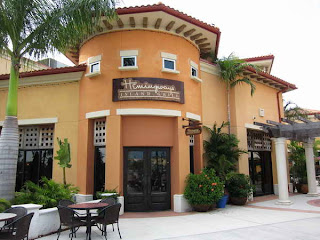 Ernest Hemingway had Captain Gregorio Fuentes at the helm of his beloved fishing boat, Pilar, for  26 years during his visits to Habana and Cojimar in Cuba.

Hemingway’s Island Grill has an able chef at its helm; Executive Chef Justin Fleming. With ample photos of Hemingway, Pilar, his Finca Vigia home outside of Havana, and the restaurant’s inner architecture styled like his Key West home, it’s delightful eye candy for Hemingway aficionados. Combined with Chef Fleming’s culinary creations, it’s a double delight. The restaurant is perched on a pond, with a large rear patio. Inside, walk past historical photographs, tables and booths to the back private dining room. 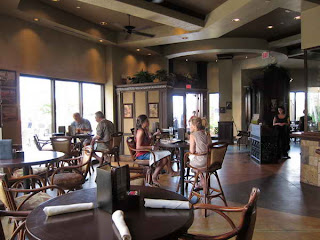 It takes some cojones to offer up one’s first four course wine dinner for only $34.95 per person, especially with wines unknown to all save one of the twenty some participants. How did it go? Magnifico! The wine dinner opened with baby lamb chops with smoked paprika and warm hummus with curry infused olive oil. 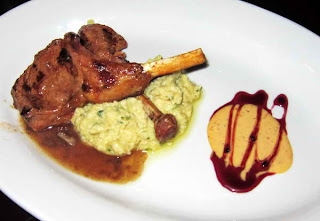 The chops were tender and crisp on the edges, atop the hummus. Each forkful of lamb and hummus melted in the mouth, and the experience was heightened by the complementary Bearboat Pinot Noir, ’06. Edward McDermott of Southern Wine and Spirits, Constellation, was kind enough to describe this and the wines that followed. 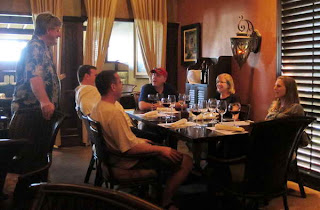 Second course paired the Hogue Chardonnay Reserve 2006 with a fresh grilled zucchini and grilled onion salad with shaved Reggianita cheese over mixed greens, drizzled with cherry-Dijon vinaigrette. The grilled sweet onions stole the salad’s show. The crisp, fruity Chardonnay dances wonderfully on the palate, bringing out the vinaigrette’s cherry notes. It’s fun to see how a well chosen wine brings out the best of a particular food. 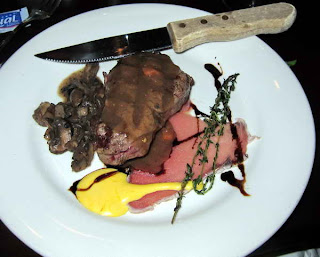 causing diners to mouth “Wow!” The B. B. Dulcet Reserve, a 78/22 cab/syrah blend was “like velvet” with the steak. This is a great wine to have with beef or lamb.

We enjoyed Mr McDermott's wine pointers. Chef Fleming came out between courses to each table, explaining his pairings. I’d have been bragging if my food came out as well. He’s lower key than me. 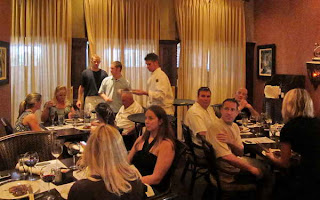 The dessert of grilled pound cake with properly poached pears and home made blueberry mascarpone ice cream was a sweet, nicely done finish to the four course dinner. 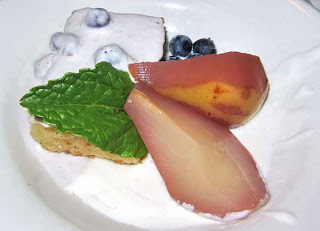 The Blufield Riesling was ok; I preferred the richness of the unexpected pour of Jackson Triggs Vidal. It’s a keeper; almost as rich as Inniskillin Vidal, at a fraction of the price. A Sauterne or Barsac might have been too rich and sweet for the pear’s delicate taste. I’d buy and serve the Bearboat Pinot Noir, Hogue Chardonnay, BV Dulcet Reserve and the Jackson Trigg Vidal in a heartbeat to my home guests. 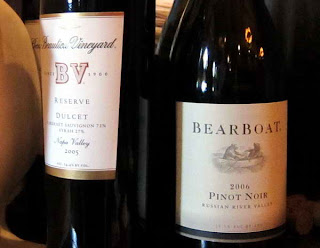 The wine dinner’s pacing was slow enough, the lighting low enough, and the quality high enough for the guests to agree that they'd like to return. One said, “We got more than twice our money’s worth with the great wines and food.”  Everyone toasted Executive Chef Justin's cuisine and wine selections! 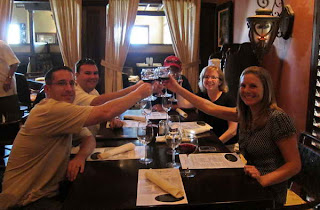 Visit Hemingway’s Key West home and its polydactylic felines. (BTW, He had peacocks, not cats when he lived there!)  Fly south to Habana, drive to San Francisco de Paula, and peer in the door and windows of Finca Vigia. 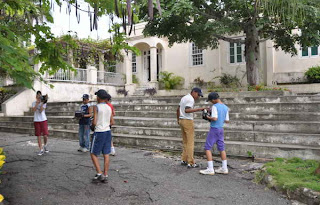 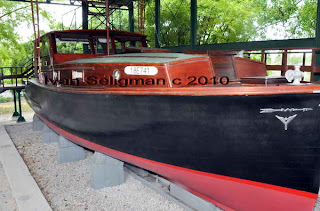 From the hilltop vigia (lookout or watch tower), look north to Habana. There, "Papa" had daiquiris at El Floridita and mojitos at La Bodeguita del Medio. Seeing the photos of Hemingway “in situ” here adds to your appreciation of Hemingway, the man, much as his books give insight into Hemingway, the author.

While I didn’t try Hemingway’s Island Grill’s Caribbean menu selections, I have no doubt that they are of equally good quality as the wine dinner’s treats. It all comes from Chef Fleming's able hands. 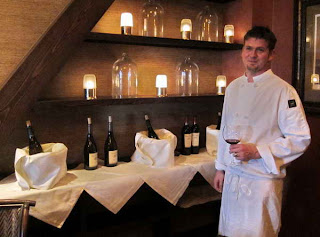 Yes, the wine dinner’s quality exceeded expectations. It’s the equal of several of those costing $70 and up. I look forward to attending other Hemingway’s dinners in the future. So should you.

Fantastic job on the review and photography of the Hemingways Fantastic Wine Dinner!