Copenhagen’s Restaurant Puk was  a “meant to be” spot for us. It'll be a memorable spot for you, too. Our very helpful concierge at The Square Hotel recommended it as a favorite, reasonably priced restaurant with very good Danish food. The next day, while walking a block from the City Hall Square, or Rådhuspladsen, a local foodie said, “Oh, just 200 meters down is Puk, my favorite Danish restaurant.” As we approached it, I realized I’d photographed it from our hop-on hop-off bus tour the day before, thinking “I’d like to be eating there on a sunny day!”

Easiest way to find it- get directions to the tourist-filled Absolut Ice Bar by Hotel 27 on Lønganstraede (the over-hyped claustrophobic little freezer-bar. Elderly tourists’ buses line up outside-and the tourists leave saying, "We got taken, paying to go in a silly, cramped  freezer room"). Puk is east of it, ~650 feet down the same street (it becomesVandkunsten) on the opposite side, heading away from the City hall area. It’s pretty easy to spot- set back from the road side, the phallic fountain marking the little square in front of Puk-a tall tree or two are nearby.
Step down to Puk’s basement location, and you’re in a warmer world. Outside, it may seat 70 or more on a sunny day, inside 35 or so people fit at the bar and wooden tables. 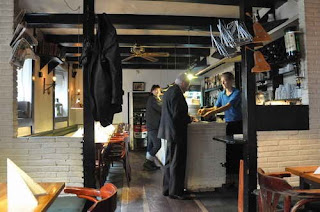 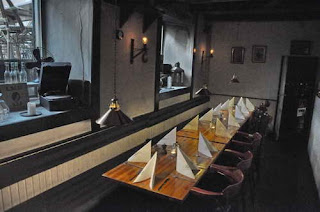 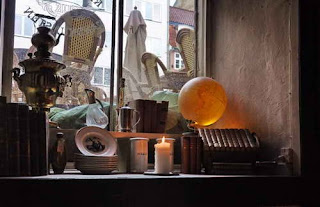 Old is just not the word for it-the building was used by a brewery for King Christian 3rd in the 1500's, and the restaurant got its late start in 1750. King Christian 7th visited here with his prostitute-mistress, "Boots-Catherine" Benthagen in1767-8, and the food’s still well worth a royal fling!
The Danish and English menu lists a good number of selections. Tired, we asked our pleasant server, “What’s your recommendation for first timers?” She recommended the combo of herring in Aquavit, sour cream and dill, followed by roast pork for Kr. 188, US$ 31.30 (6 Kr for a dollar now), and a couple others. We enjoyed our glasses of locally brewed Carlsberg beer (52 Kr, or US $ 8.60).

The generous portion of herring in aquavit, sour cream and dill could be a meal for some. 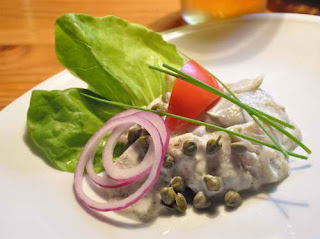 It was THE BEST herring we’ve ever had-tender and exquisitely tasty! You have to have this when in Copenhagen! The preparation is sooo tender, unlike other firmer, and still good herrings we've had.
We were not rushed on to the second course. The plates arrived nicely paced, perhaps 5 minutes after we finished the herring. Again, large portions- we were glad we didn’t order appetizers! There’s generous sliced pork with a very good crisp-glazed salty rind of skin and fat-it's not a chicharrón or popcorn-like dry skin. I liked nibbling on the crisp skin, and set aside the subjacent rim of tasty fat. It's an art to have a crisp skin and tender meat. If it was a little less salty on the crust, I'd have given it a "best" rating. 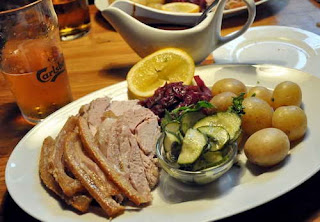 Skin and little rim of easily removable fat aside, there's still a big portion of pork. The pork melts in your mouth! Shpritz it with lemon and add a bit of the rich brown gravy. Mmmm! The hot red cabbage is good, and the small rounded potatoes and sliced pickles are fine. Next time, we’d try the Smørrebrød (open-top sandwiches) for lunch, or dinner’s special tasting menu of Puk´s herring based on aquavit and sour cream, filet of flounder served with homemade sauce tatare, homemade pickled salmon served with mustard sauce, liver paté served with beets and bacon, Danish style roast pork served with red cabbage and pickled cucumbers, and brie served with grapes for Kr. 178, or US$30.
Not surprising that visiting Puk was b’shert, or clearly “meant to be.” 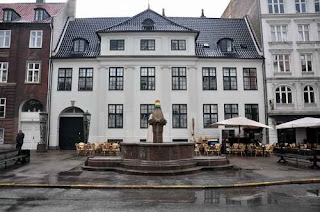