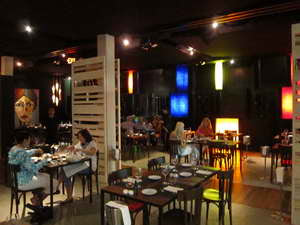 The evening of February 26, 2011 started at Vino y Olio, a sleek fairly new restaurant with a stunning glass wall to the kitchen, and a single chef’s table within the glassed in enclosure. 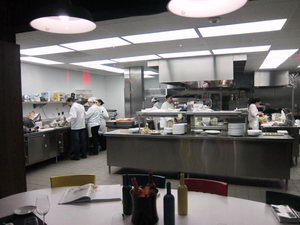 The action was on the covered patio, with perhaps 120 hungry folks who each paid $250 for the progressive dinner . Bear in mind, the main purpose is to raise money for the School of Hospitality and tourism students and programs at FIU, while enjoying food and making new friends.W as it worth it? You decide!
This was my first such dinner with the Festival. Over 300 folks were divided into three color coded teams, to avoid overwhelmong each restaurant. Ages were mainly 30’s and 40’s, with lesser numbers of those younger and older. My “green” team was totally buffed and ravenous!  There was only one not-well-marked stand with three Festival people to check people in and give their wrist bands. Not efficient-shoulda been two or three tables to get people processed in these first 20 minutes. Signage telling people where to go was lacking, wasting over 15 minute for some who didn’t quite get the “lay of the land for a long time, and became last on a long line. We started with champagne in flutes at Vino y Olio, and appetizers started to come. First a mini pizza, that guys wolfed down. 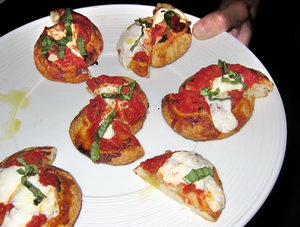 Women tended to avoid as it would leave red bits between their teeth!  Caterers, take note! It was tasty. Then smoked salmon bites, which is hard to screw up-a better choice, Vino y Olio! 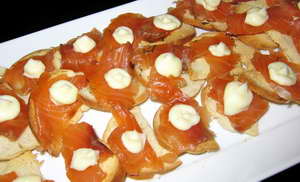 A simple potato creation followed, and one or  two others. The distribution was skewed to those outside, not inside, and my seated group of new friends felt we missed out on some things. When it was time to go, I went outside on the patio, and saw 6 fairly full trays of apps just sitting on a far table-clearly a problem in distribution. How big a problem? Not really, who needs to fill up on apps? My friends felt they were ok to break the ice, and that the mini pizza could be more bite sized to a mouthful. It’s not easy to serve 150 folks tightly packed inside and outside in just 45”, so I think they did a decent job.
Next was Michael’s Genuine Food and Drink, where we were led to our table according to our names. Nice. We met a young couple, she had a large purse. They didn’t last long at the table. Apparently she had a 3 lb dog inside said purse, someone spotted it as it poked its head out, so the trio was asked to dine outside. That’s fine. Nice weather to sit under the stars. 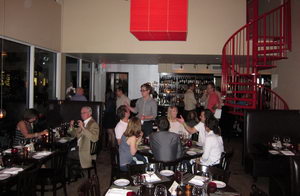 We enjoyed the nice Chateau Ste. Michelle Canoe Ridge Chardonnay 2007, and a touch of the red wine, both were a good selections. They had perhaps 8 cooks and chefs on the line, cranking out 120 bowls of  seafood stew with fennel confit, shaved fennel and radish salad, and a blob of saffron aioli on a slice of toasted sourdough bread. 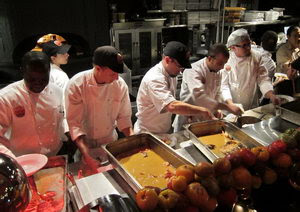 The stew was probably fairly hot at the kitchen, but became luke warm by the time diners got it. Pre-warmed bowls would have helped a lot. The stew was very tasty, with shrimps and other seafood perfectly cooked. 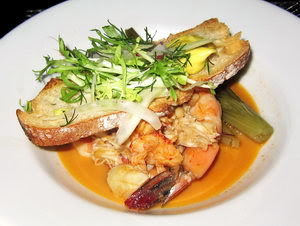 Given that the kitchen was slammed, they prepared as best as possible and delivered tasty food, they done good! I’d go back to try dinner on a less frenetic night. 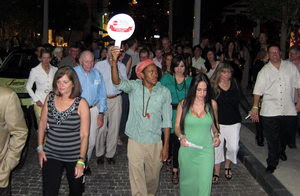 We were then led as a rag-tag group by a friendly dreadlocked pied piper’s raised green sign to Sra. Martinez, occupying a nicely restored Art Deco style post office building. We sat on the ample front patio. 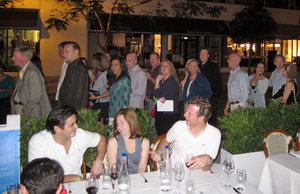 One of our party asked for a vegetarian plate as we sat down. Owner/Exec Chef Michelle Bernstein, one of South Florida’s top chefs, chose lardon-wrapped rabbit loin as her protein. This and lightly cooked collard greens and small carrot balls were placed over a Carolina rice-carrot risotto, with a swirl of natural jus. It came out hot and attractively plated. 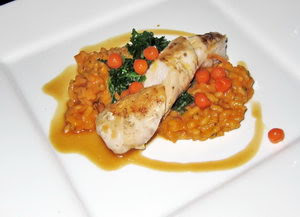 The Lorinon Reserva 2005, DOCa was a good counterpart. If we weren’t told it was rabbit, I and my table would have sworn it was tender chicken breast. Yes, a nicely cooked chicken breast, without the woodsy or gamey taste some older rabbit and certainly hare can have, that some relate to a waterfowl’s dark meat. The vegetarian plate was fine. People were a little disappointed that Michelle didn’t come out for a minute to take a bow. She was already preparing for the next dining crowd.  My friend took me to the kitchen. We said hi to a busy Michelle, thanked her for her presentation and gave kudos for a creative meal and service nicely done. 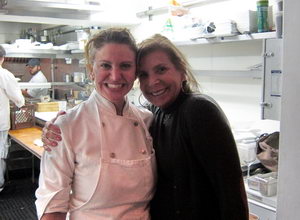 I’d go back in a heartbeat to try the Latin dishes, especially as I liked my eclectic tastings at Michy’s, her other restaurant at 69th and Biscayne Blvd. Forty five minutes was just enough to have the course, and be off to the next spot.
Nearby Fratelli Lyon was slow on serving the prior group. So we stood in the street for over ten minutes. 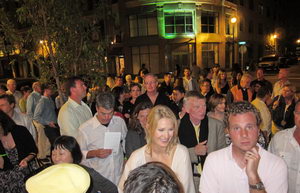 Not a problem, really, as we had good weather, apps and a tasty main in our tummies.
Fratelli was not as well organized as Sra. Martinez. People were good natured about the delay getting in, and the delay on getting served. It’s has a hip modern/industrial ambiance with glass walls and hard seats. 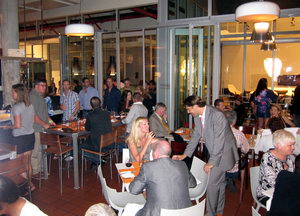 They served a Barolo braised beef with salad of heirloom tomatoes, perfectly cooked green beans and grated “juni”. It was nicely topped with a good grated cheese.The wine was a Tormaresca Bocca di Lup 2006, that paired well. The beef was low and slow cooked and was good in taste and portion size, leaving room for dessert! 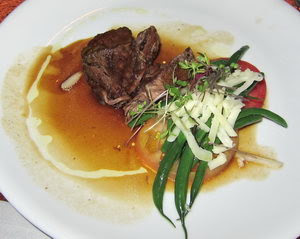 The vegetarian plate was fine.
We had a wonderful time at Gilt, with many delicious desserts to choose from!  Brick and Bottle got great publicity from the taste and creativity of their desserts. I’m hooked! From comfort food like butterscotch pudding with a crisp cashew brittle, and curry peanut butter ice cream with whoopee pie, to a vanilla panna cotta with blood orange gelee, guests felt like kids in, well a well stocked candy store! 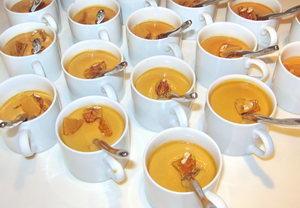 There was also pecan tea cake with bourbon cream, toffee and chili flakes. I liked the coconut lemongrass shake wit basil tapioca.  I forgot the rest, however our taste buds wanted more, more more! Other stations served chocolate bars, offered sunglasses, and had gummy bear type goodies.
Polling the other guests, everyone had a good time, and the restaurants did fine, considering 45” was not a lot of time to meet, greet, feed and send 150 people on their way. Wine pours were on the small side, under 2 ounces, probably for liability reasons.  So figure that if you went on your own to each of these spots and got a small portion of food and a small pour of wine, it’d cost you $100-125 with tip.  Bottom line-you had a unique evening’s dining experience and met some new friends, in exchange for a donation of $125 to the Festival and the Hospitality students. Fair enough for me! We heard there would be no more contentious Bubble Q offered again.
Next year for an evening’s dinner/event, I’d prefer to be in one spot and be served several different courses, each by the same or different chefs. Progressive dining was nice to try, once, for us. Getting up for desserts at the same or a different location however is a fun opportunity to mingle, so having two spots in a night is easier logistics and just fine.
Posted by Ivan Seligman at 12:57 AM