His Serene Highness Prince Albert II of Monaco visited Naples and Fort Myers on March 5th, 2011, in support of the acclaimed Art of the Olympians Museum and Galleries, at the Art of the Olympians Al Oerter Center for Excellence in Fort Myers.  The museum opened in January 2010 to display Olympics-related exhibits and beautiful paintings, drawings, sculpture and poetry crafted by amazingly multitalented Olympic athletes. The fine quality of the rotating art exibits, the building's clean lines, and  its active support of community activities makes it a superb magnet for savvy locals and tourists to Fort Myers' Riverwalk. Combine your Museum visit with dinner at Twisted Vine Bistro, theater at Florida Repertory, or an evening at the Sidney and Berne Davis Art Center, and you've had an evening to cherish!
Prince Albert’s day started with light breakfast with some 150 guests at Naples Port Royal Club, hosted by Elizabeth Star, with organizers Elizabeth Ganzi and Ashley Gerry.

Prince Albert II has more than earned his stripes, he competed in five Olympic bobsled competitions! Accompanying Prince Albert were over twenty former Olympic athletes.Many excel in various arts such as painting, drawing and sculpture. Their art be seen and purchased at the AOTO Museum. 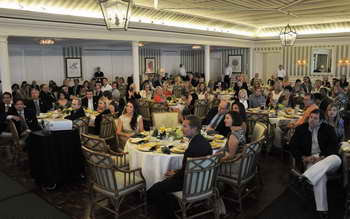 I wish some of our leaders were as warm, bright and kind as Prince Albert. I and others who chatted with him were equally impressed with how down to earth he is. All were appreciative of his kindness; sharing his time to assist the AOTO's worthy causes.
Below are Fort Myers Mayor Randy Henderson and wife Ginny, Bonita Springs Mayor Ben Nelson, Prince Albert II, and Naples Mayor Bill Barnett. 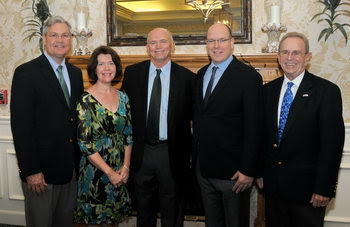 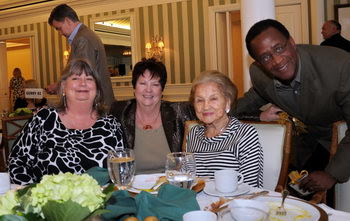 Some of the former Olympians at the breakfast include Cameron Myler, who was on four Olympic luge teams. She carried the United States flag at Lillehammer, Norway in 1994, and is a photographer and lawyer.
Luge is one of the fastest, and most lethal sports. Myler said, "The passion that fueled each of us in our respective sports on the playing field...is what fuels us as artists."  She talked about "the power of art and sport to inspire and be a positive force in the world."
Jean-Blaise Evequoz, the Swiss fencer, is a painter.
Some other Olympians at the breakfast were Amadou Dia Ba, the Senegalese track hurdler;  Greg Shepard, of the  Puerto Rican bobsled team; Steven Lee, Taiwanese bobsledder; Aussie swimmer Shane Gould -5 Olympic medals at age 15; Canadian sprinter Nancy Forsythe; British javelin thrower Ronald Bradstock; USA Bob Beamon, long jump; Jon Koncak basketball; USA gymast Michelle Campi; USA Swimmer Allison Wagner; Emanuela Pierantozzi, Italian judo; Puerto Rican Olympic bobsledder John Amabile;  Tanzanian track and field Nzaele "Queen" Kyomo, now local,  and USA Race walker Larry Young.
Al Oerter, who won four consecutive Olympic gold medals in the discus throw, passed away several years ago, but not before he served as one of the main catalysts and organizers of the Art of the Olympians. Oerter estimated he had thrown the discus over 450,000 times over his lifetime. Amazingly, he said that he never had one perfect throw! He said inspiringly, "If we strive to be the best we can be each day, we can do some wonderful things on this earth."

Besides being an incredibly talented, bold, abstract painter, Al also was also a Grumann Aircraft  engineer, working on the 1968 Lunar Landing Module. "Multitalented" is an understatement for these Olympians!
Cathy Oerter, his widow, ably keeps his generous flame alive with countless contributions.
Olympian Liston Bochette competed in the decathlon and bobsled and is highly accomplished in drawing.
He’s a "hometown hero" as well. He is the co-founder and dynamic CEO of the Art of the Olympians Museum, tirelessly carrying the torch forward for Al Oerter and numerous other Olympians.
His mother and sister run the Fort Myers Dance Bochette school.
Previously, some of the Olympic athletes visited local schools, sharing their inspiring words with students.


HSH Prince Albert was then whisked north for the day’s next event at the Fort Myers AOTO museum, 1300 Hendry St., at 12:30 p.m.. Participants joined Prince Albert painting on an Olympic sized canvas! A 5:30 reception  at the museum was followed by a gala ball at Harborside Event Center, where fifteen dancers of the Gainesville, Fla. based Dance Alive National Ballet were invited by the Prince to perform their original ballet "Soar."  The Prince arrived in Naples at 6:30 a.m.. Talk about a royal challenge for the Prince to navigate, and meet and greet so many!
﻿
﻿ 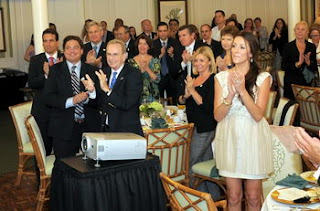 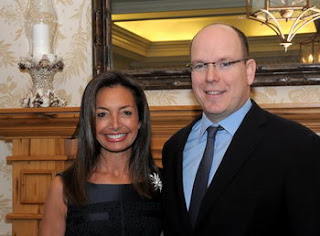 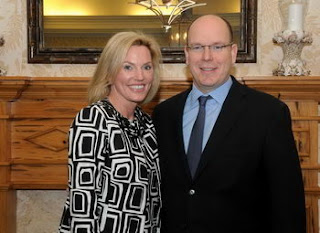 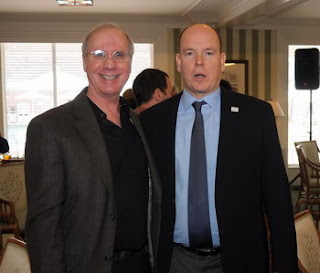 Visit the Art of the Olympians Museum! Call 332-5055, or click on  www.artoftheolympians.org to see some of the beautiful art works, and learn about current and former Olympians' fascinating careers. Learn more about Al Oerter's challenges and accomplishments at:  www.aloerter.com/
.
Some photos are for sale at: http://ivanseligman.smugmug.com/Other/PrinceAlbertvisitsNaplesAOTO/16080123_RbrrW#1206807911_tqgU9
All profits go to AOTO.
Posted by Ivan Seligman at 9:11 PM

Labels: An Insatiable Appetite, Art of the Olympians

Another Olympian not mentioned in your article was Ft. Myers local, Nzaele "Queen" Kyomo from Tanzania, who was in track and field in the 80 and 84 Olympics. She is now a professional area dancer.

Thank you, Ivan. I have printed out a copy to share with Berne. We always enjoy you and your photography. Thank you for sharing it with us. It was a lovely day.
Alexandra Bremner