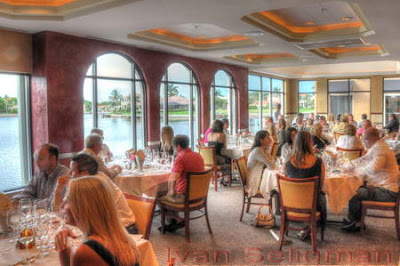 Since Executive Chef Brian Roland arrived in Naples in 2008, taking the helm at the formerly lackluster Maxwell’s, his refreshing cuisine and owners Peter and Chris Sereno’s sleek décor let their newborn M Waterfront Grille easily cruise past many lesser restaurants. These bold changes and the lovely wide Bay view has made "M" one of my favorite dining spots. Chef Brian has now come up with a Summer Chef Series that makes "M" even more desirable!

Chef Brian invited top chefs from other restaurants to co-host, and prepare great dishes with him at monthly Summer Chef Series Wine Dinners. Each guest chef prepares two dishes, and then collaborates with Chef Brian on dessert. To sweeten the pot, they ideally use one featured theme ingredient in all the dishes. The first dinner on June 27th, featuring pork, with Handsome Harry’s Chef Tony Biagetti, was a hit.

I was over the moon at the second, July 25th dinner with superb guest Sea Salt Owner/Chef Fabrizio Aielli. 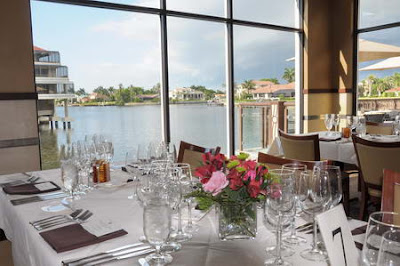 Why treat yourself to a memorable wine dinner, when cheaper two-for-one dinners abound? A chef’s multi-course wine dinner is a great deal-you to get a wonderful sampling of a top chef’s creatively prepared and plated best cuisine at a very good price. At $95 per person and $45 additional for wine pairings, everyone I talked to after my M Waterfront meal agreed that the cuisine, service and ambiance made for a superb deal and a wonderful evening to remember.

The Sablefish themed Chef Series dinner started with an amuse bouche of sized portion of crispy sablefish brandade, paired with a unique milkshake. Ever had sablefish, also known as Pacific black cod? It tastes like a first cousin to Chilean sea bass, only with more flavor and a slighter sweet taste. 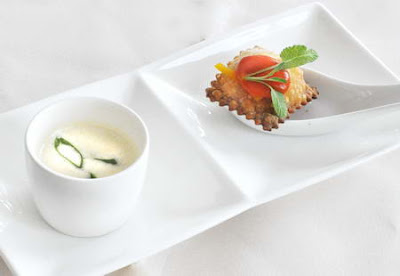 Looking like a toasted ravioli, a small puff pastry is filled with a light brandade, or mix of sablefish with olive oil and touch of potato. It’s a perfectly sized appetizer- one delicious bite. Perfectly executed, the artful contrast of the flavorful hot savory brandade nestled in its light crisp pastry is a bite sized delight. To gild the lily, er pastry, it’s topped with an accenting dollop of tomato-sage jam and Meyer lemon confit.
Ah yes, the milkshake cup on the right side of the plate. This is not your mother’s milkshake-you’ve probably never had a fish milkshake, either! This blend of warm white chocolate, milk, cream, sablefish and black truffle essence is the equal of any top seafood bisque; an over the top creation! It’s also a brilliantly clever use of the sablefish.


Chef Brian served the first appetizer, a colorful plate with a mound of smoked sablefish-blue crab salad, accented by the unique tastes of a parsnip, artichoke and apple purée, lightly topped with a light green baby mache foam. 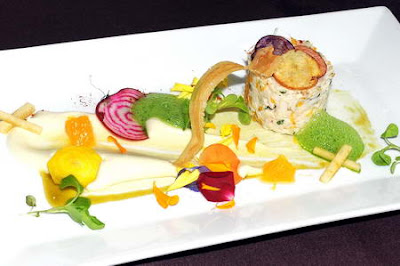 For contrasting texture, he added crisp fingerling chips and a bulls-eye slice of candy-stripe beet.  Then he accented the delicate tastes with crystalline grains of Fleur de Sel. Garnished with tiny vegetables from Chef’s Garden, it’s a picture-perfect delight.

Chef Fabrizio practically stole the show with the second appetizer. 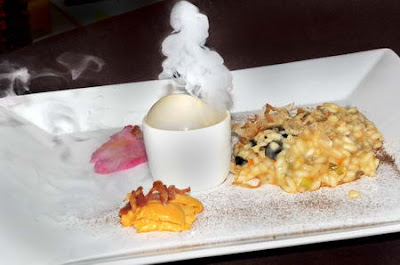 Diners were amazed, then transfixed, as the sea urchin cappuccino, Mount Vesuvius-like, bubbled up and over its cup onto their plates! 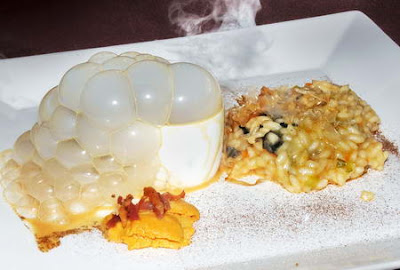 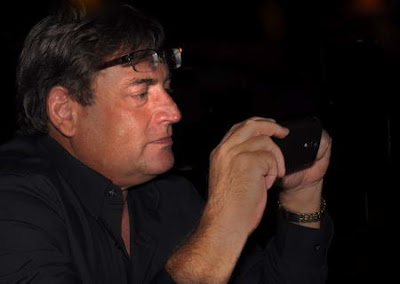 It reminded me of my sixth grade science fair project- a desktop-sized volcano spewed clouds of pyroclastic green ash and flames. Chef Fabrizio wisely uses super-cold dry ice instead, to fuel his cappucchino cauldron.
This explosive appetizer was accompanied by strips of creamy yellow sea urchin eggs topped with savory crisped Colonata lardons. A fluorescent sablefish carpaccio was overwhelmed by torrents of briskly bubbling sea urchin foam. The lush risotto, made with Acquerello rice, the “Rolls Royce” of rice, was the real culinary star. Lightly blended with melted cheese, it’s a superbly made risotto. This paired well with Dr. Loosen Red Slate Mosel, 09, a refreshingly dry,  yet fruity Riesling.

Chef Brian’s entrée course featured a succulent seared slice of curried sablefish, topped with microgreens, and accompanied by a molten truffled lobster-filled crisp potato fritter. The combination is a knockout! It got better with two separate bite-sized crescents of “Jersey Corn” custard brûlées, wilted spinach and salsify for color, and a pipette of reduced wild mushroom liquor to sprinkle ad libitum. 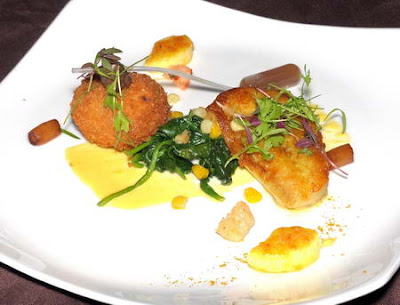 My sainted mother never cooked for her three sons like this! Alas, she also cooked long before the paired Domaine Serene Rosé wine was a glint in Ken and Grace Evenstad’s eyes. 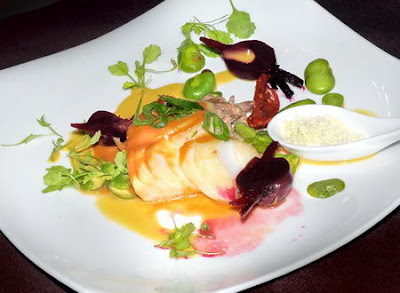 The fish truly “melted in your mouth.” It was accompanied by earthy morels, bright green fava beans (sans liver and a nice chianti), slivers of duck confit and baby beets. The rich, saffron-yellow lobster sauce was superb-nary a drop was left on a plate! A glass of 2009 Ferraton Pere et Fils Cotes du Rhone Samorens Rouge, was a gem of a wine pairing.

Two keys to a great multi-course dinner are portion size and pacing. The goal- diners leave satiated, not stuffed, so they return for another dinner! The two chef’s proper portion size and relaxed dinner pacing ably accomplished this.

The two chefs' dessert was either a resounding success for its creativity, or an abject failure for its utter lack of sablefish. Confession: I really can do without a fishy dessert. Nearby diners were also happy and pleased at the fish's absence. The servers first scented the air with whiffs of rose petals and lime rind. We were then served with a hamburger and bun topped with poached egg, a side of fries, ketchup, and cup of mustard. That's no big deal-my mom could serve that up while sleepwalking! 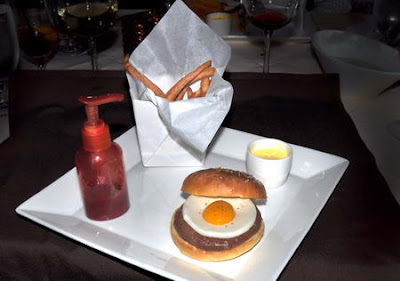 A quick bite of the burger proved otherwise. The burger's beef  was a luscious chocolate mousse cradled in a brioche bun, topped with a coconut and mango puree fried egg. The golden fries were crisp sweet biscotti. The two condiments were a soft gelato mustard, and a rich raspberry ketchup! Oops, that dessert’s out of my mom’s league!

Summertime is my favorite time to dine in Naples. I relish not having to wait for a table, servers can give attentive care to diners, and dining rooms are not crowded or noisy. The 60 diners left happy-some reserving for the next dinner. 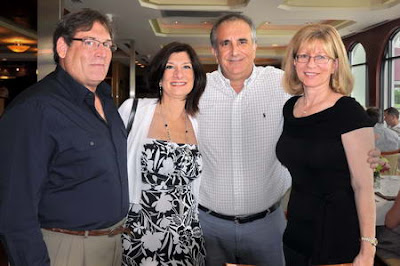 The two photos of the sable fish look like exquisite watercolor paintings come to life. Gorgeous!

The two chefs are such accomplished artists with such culinary taste and beautiful presentations-so happy to have them in Naples!

Thank you for noticing!