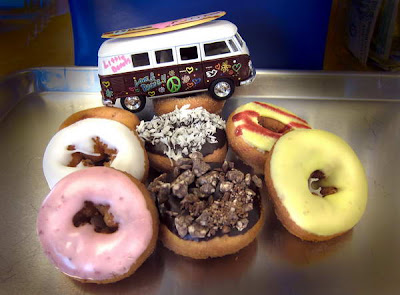 Peace Love and Little Donuts came into my life a few months ago, when  sweet toothed Laura brought over  boxful of small, kaleidoscopically colored donuts that I shared with my trusted tasting team. With just one bite of the maple-bacon donut, I was hooked for life!  Since then, an assortment of Peace Love and Little Donuts has become a favorite gift to give to others. I also stop by to savor a new flavor or two. 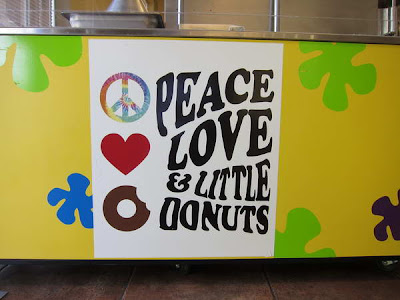 There was no shortage of new flavor combinations, (or other happy customers) as I went to pick up my first  batch from a bay at the BP gas station at Mooring Line Drive and Tamiami Trail North. Ahem!  Did I  lose you with that gas station of a  non sequitur? Yes, I (and many others) honestly get our donut fixes from the BP gas station in front of Office Depot, and it's all Mark Couch's doing. 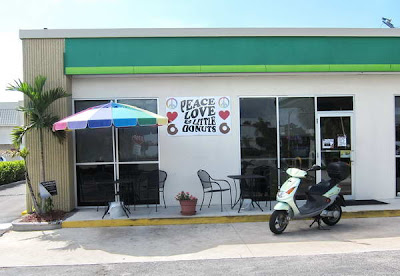 The funkily named donut store store started a few years ago back in Pittsburg, Pennsylvania, and Mark literally flew south with the hippie donut concept to Naples. That was not a stretch at all for a young jet pilot with a delicious dream. Now his colorful dreams are hand-crafted down to earth in Naples, and flavors are as unpredictable as the path of his magical VW bus. 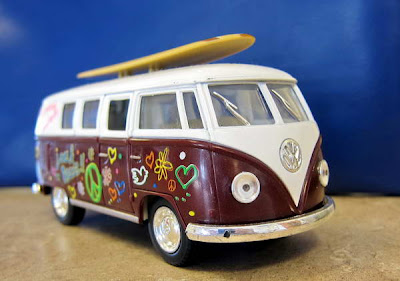 You just have to visit Mark at the donut-sized store to take it all in. The South American Intellligentsia coffee is deliciously bold and freshly brewed. It tastes much better than Starbuck's or other boutique brands. The donuts are made before your very eyes from  three unique batters-devil's food cake, blueberry and sour cream-then topped with an amazing assortment of toppings. Think rich muffin mix, not a national brand's airy-type mix and you'll be right on target.

The diminutive donuts are 65% of the size of regular donuts, and come in three price ranges. "Groovy" donuts are simple sugar donuts, plain or glazed, with maple sugar, cinnamon sugar, ginger sugar, powdered sugar and Saigon cinnamon sprinkings,  for $.85 each. 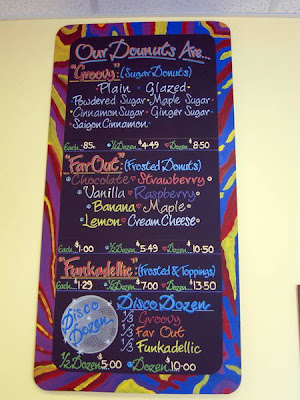 "Far Out" $1.00 frosted donuts have unique hand-dipped toppings like raspberry, strawberry, banana, lemon, maple, and even cream cheese. The $1.29 "Funkadelics" have a combo of frosting and  toppings, and that's where the culinary craziness begins. It's best to get a dozen donuts, mix and match. A dozen of the "Groovy's" are $8.50, "Far Outs" cost  $10.50, and "Funkadelics" are $13.50 per dozen. First timers often get a "disco dozen" with four each of each of the three main categories for a total of $10.

Mark has a repertoire of over forty toppings so far, and offerings change with the seasons and holidays. There's usually 15-20 flavors to choose from every day.

Below is a baker's dozen of donuts I brought home just the other day-they include vanilla, strawberry, chocolate, coconut, Nestle Crunch, lemon, plain sugar, cinnamon sugar, blueberry cream cheese and raspberry lemonade (with the raspberry drizzle on the lemonade -yellow icing). 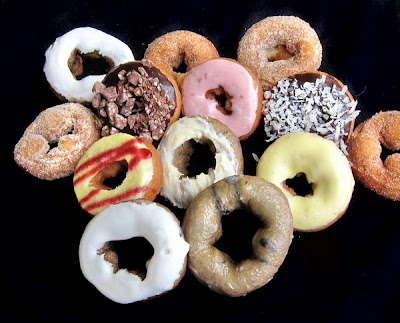 On anothe day, I got Oreo, M&M's, coconut pineapple, and banana from another assorted box. 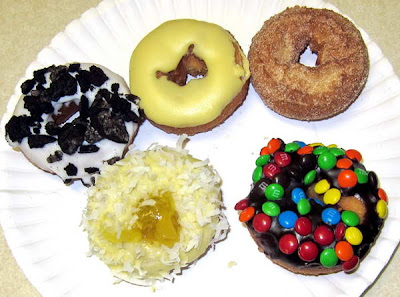 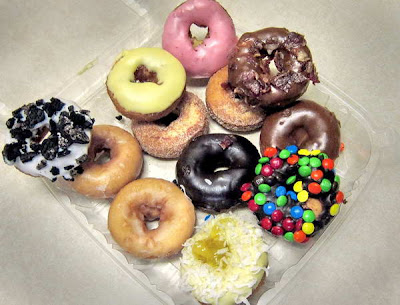 Other flavors include banana split, Boston cream pie, chocolate chip cookie dough, blueberry cheesecake, apple pie, s'mores, raspberry Oreo, samosas, rainbow jimmies, and my (and other guy's) favorite- maple bacon! Quite a few women go ga-ga for raspberry lemonade.  My  two cents on it all? For a store that makes so many toppings, I'd like to see different doughs used as well, with different textures, colors and taste combinations. Just three doughs or batters is a little limiting.


How do they taste? Just like they sound-delicious!  Smaller donuts are also lighter on calories, too!  Best time to see your own donuts being made is in the morning, with other batches make throughout the day.  In a rush? Call in your order, and pick it up at the drive-in window on the south side of the gas station-I kid you not! 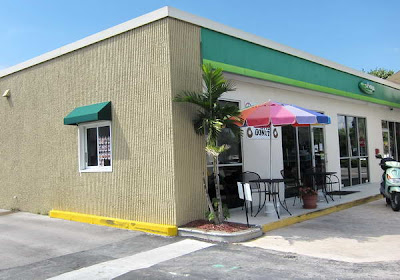 Peace Love and Little Donuts is on the south side of Wayne’s World BP at 2201 U.S. Tamiami Trail North, at the southwest corner of Mooring Line Drive and U.S. 41 in Naples, a block or so north, and across 41 from the Coastland Center Mall, 213-0188 (also on Facebook, too). 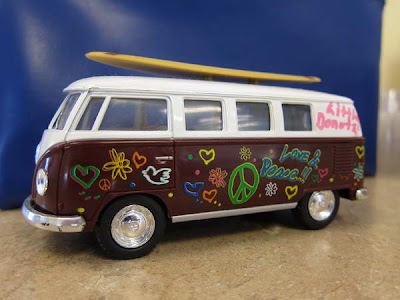 Posted by Ivan Seligman at 9:40 PM