Cristof's on McGregor Restaurant in Fort Myers- Not Ready for Prime Time. 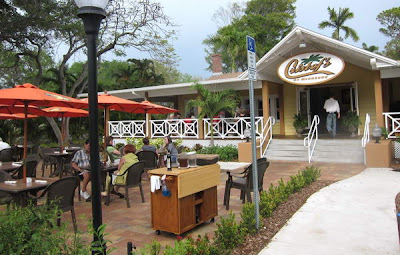 After experiencing our first hour of errors at Cristof’s, we expected someone from “Candid Camera” to pop out and thank us for being so patient with serving bloopers.  By the time we left, I was convinced the place was taken over by the Three Stooges.  On the surface, Cristof’s is a restaurant in a lovingly restored old house. It’s situated on a tree shaded corner in a desirable location next to for the Arts. Driving along tree shaded McGregor, it’s attractively inviting, with open air dining. At first glance, it’s a place to be visited. And on your visit, despite the problems inside, it still is a homey place you really, really want to like. Not just as in “Facebook liking,” but as a spot you wish you could enjoy coming to every week. Quite a few of the locals have learned their lesson, and stay away. 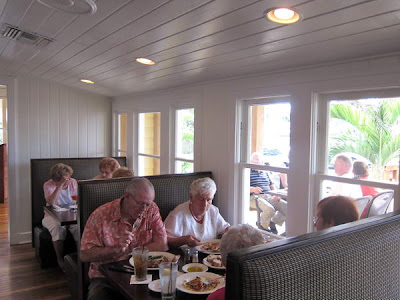 The locals who do return  come mainly for lunch, putting up with the slow service for the good prices.  The good news is- there’s plenty of room for improvement. The bad news isn’t that bad; it’s just that I, my guests,  and  a dozen other guests I quizzed at nearby tables would not return to Cristof’s for several months, to let painfully obvious problems get corrected.


As the Captain noted in Cool Hand Luke, “What we have here is failure to communicate.” Ina nutshell, Cristof’s servers and the cooks are on different planets when it comes to communicating and working together.  On a not too busy Sunday night, orders came out very disorganized-some too slow, some way too fast rather than being “paced”, or were sadly  incomplete, making diners wait for 15 minutes. Servers arrived with dishes belonging to other tables.   Dirty dishes piled up on tables while servers disappeared for fifteen minutes. For now, Cristof’s is a uniquely good place for you to visit- to painfully experience examples of how not to do things right.
Your visit starts with Cristof's awkward, inadequate  and ill -designed parking.
Take a sharp turn off of McGregor alongside the restaurant’s South side, and rather than parking right behind the restaurant, just keep on driving past the large garbage bin. Most of the parking spots are too far away for comfort.
Sure, I can use the exercise of the long walk. Those above a “certain age” believe it is a sign that this and other important things were not completely thought out before opening the restaurant.
One man said, “I feel like I’m driving to park in the next county! If it was drizzling, I wouldn’t walk from my car to Cristof’s, I’d just drive my family to another spot.” There are truly insufficient parking spots for the number of patrons. I'm told that at 11:30 am  before the place is full, people have to park over on the Alliance for the Arts property, and walk over.
Someone spent a lot of money turning a neglected old wooden home into a very attractive spot with old charm. The Southern style wide wrap-around wide porch beckoned to me, however the day’s humidity made dining inside one of the two air conditioned rooms the preferred option. The umbrella shaded outdoor tables are best for guests dressed in shorts and shorts on most days. The ample bar is in the back.
We asked for the daily specials, and were told that one of the soups would be served in a cup, but would be priced like a bowl.  Huh? So what? Turns out that’s what the chef instructed our server to say.  Ok….Whatever… 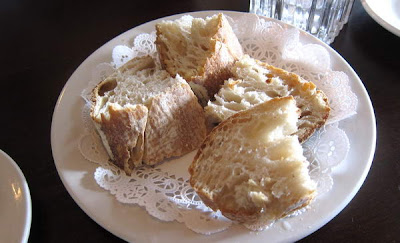 A napkin covered basked of warm sliced bread arrived, with herbed oil dip. The crust was a little doughy, not as crisp as it might have been.


We ordered two wines and a mojito. The delicious wines arrived a few minutes later, without the mojito. The two wine drinkers patiently waited, and waited, and waited till the mojito arrived. Fifteen minutes later, the lonely mojito arrived. The place was not busy! It was watered down!  Whether this was because it sat for fifteen long minutes, or had little rum, it didn't matter. Not good.  Little did we know this service gaffe would be typical of the evening for us and many other diners . Martinis are $7.50 to 8.50, and cocktails similarly fairly priced. 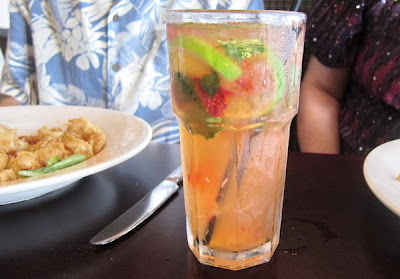 The prices are quite wallet friendly all around for appetizers, mains  and desserts. 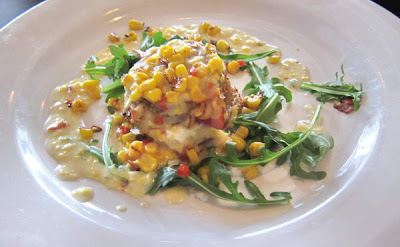 The $9 mussels with bits of garlic and shallots in a Cajun white wine broth were perfectly cooked and truly fresh. Wow! The chef handles them lovingly, just barely cooking them, and not a second more, as it should be. The broth is mildly spiced, not overshadowing the delicate sweet mussels. Nicely done! I would not order the mussels then the bouillabaise, as the mild heat of the broth on both is too similar. 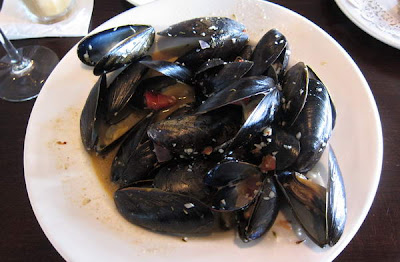 I’m a sucker for fried calamari, and the $8 squid pieces are  dusted with jerk-spiced cornmeal and served with a thick tasty cilantro-marinara dip. Perhaps the calamari were  fried in oil  kept at too low of heat, as there was a greasiness, rather than a desired crispness to the fried breading.  Perhaps they sat a while too long under the heat lamps... 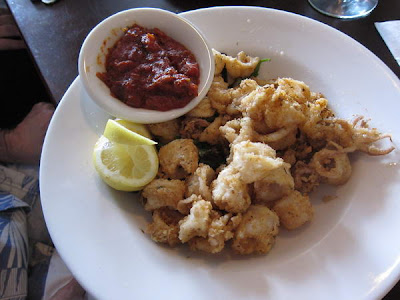 Before we were a few forkfuls into our three appetizers, a pair of cooks smilingly brought all our main course dishes to the table!!!  They didn’t quite get it when we said “We just started in on our appetizers!”  Realizing that we were not at all happy to be the recipients of “service on amphetamines”  when we really wanted a relaxed meal, they offered to take the plates back to the kitchen. They didn’t say they’d fix fresh ones in fifteen minutes, when we normally would have been ready for the next course.
.
Rather than have the plates sit for fifteen minutes baking under heat lamps, we let the main plates stay on the now crowded table with the barely touched appetizer plates. Ugh. Our server disappeared into the ozone  for the next fifteen minutes, leaving us with a too crowded table of plates. Not good. Advantage to Stooges Larry, Moe and Curley.
The Cajun beer battered fish and chips ($15) was a good portion, with a crisp nicely browned crust although with more crust than fish. The Cajun dip was fine. Fries were not crisp. Perhaps they should skip the frying … that’s not their expertise. 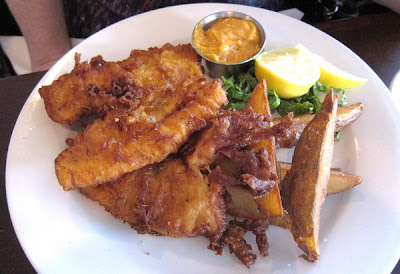 The ($19.50) was a good sized portion of nicely arrayed and cooked shrimp, tender large scallops and fish, served with an edamame succotash. The broth had a nice heat to it, as if the classic rouille was stirred within. The crisp buttered toast was a nice nod to the dish’s French origin. Recommended. 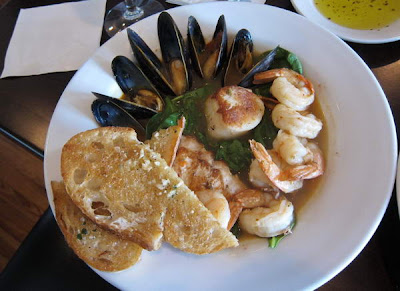 We liked the $16 creamy aged cheddar-rich creamy soft grits. These properly cooked grits were topped with a good handful of properly cooked medium, not jumbo sized shrimp, nicely sautéd in garlic, herbs and white wine. A nice nod to the restaurant’s Southern roots. 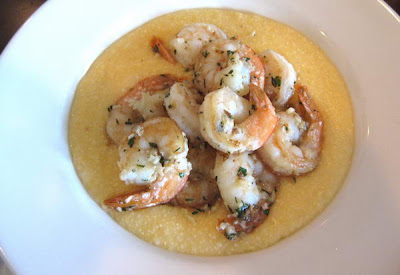 We got tired of staring at our table full of dishes, didn’t care for the loud noise level inside and had no further appetite for desserts. Sayonara, Christof’s!


We went out to visit local friends seated at the tables fronting McGregor, and they were quite unhappy  with their  party of  five’s service. While the Three Stooges antics ruled the interior,  the Marx Brothers clearly covered the patio tables! The three main pasta dishes arrived first, the three diners politely waited, and waited, and waited,  and only fifteen minutes later did the fish dishes for the other two quite irritated and hungry diners arrive. Not good, again! The server disappeared, and did not make any amends or apology, and ran off.
Those dining at yet another table said they were sad service was so bad, and will not return for months till things greatly improve. The evening took another hit when the loud crash of an automobile accident  and boom of  deploying airbags startled all. Perhaps 75 feet away, a car was balanced on it’s passenger side, to the dismay of the unhurt elderly woman still strapped in by her seatbelt. 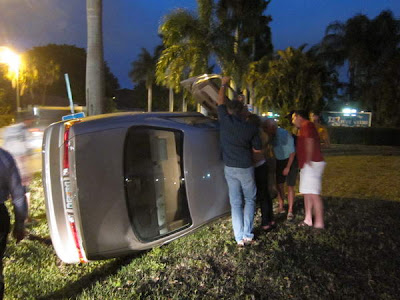 With that as the highlight of the evening, several tables took it as their cue to walk together on the too long distance back to their parked cars, vowing to never return to Cristof’s. Sad. Cristof’s has a such a lovely setting, wallet friendly pricing, fairly experienced cooks yet almost comically discombobulated service. After  five months of being open, the profound disconnect between the cooks and servers is clearly to the dismay  and detriment of  you, the  diner.
.
May improvements occur, or else the Three Stooges and Marx Brothers service will  lead Cristof's to "crash and burn"  in a culinary meltdown.
19231 McGregor Blvd, Fort Myers, 791-8473

Cristof's has the look of a high-end, interesting restaurant, but it is a bit of a mess. The menu is mostly the same old stuff you find on every menu in Lee and Collier counties. The menu is so obviously similar to the other McGregor restaurant down the street. Fort Myers doesn't need more chicken salad sandwiches- we need creativity. They should have a specialty cocktail menu as well. The space is so nice but during the "winter" it was drafty, cold, and just plain uncomfortable. I'm sure it will be hard to keep cool this summer with the doors being open all of the time. I heard that the owner planned on opening an ice cream shop behind Cristof's in the other cottage- is that still happening?

I hope the owner would fix existing problems first, before taking on more challenges.

This place is going down hill. The owner must be confused as to what he started. Who ever he is, might think about asking for help. Nobody wants to go to a nice place to eat and see dirty dishes every where, servers who are rude and a man yelling in the kitchen that you can hear in the Front of the restaurant.. I was pissed by the time I left and broke due to 10 dollar drinks that are watered down and filled over the top with ice that has dirt on it.. Disgusting !!

Yes, they will limp along, as some Fort Myers people are more tolerant of the lower quality of food preparation and service, just to be in a funky atmosphere for drinks, however overpriced.