Attempted Balloonacy at Immokalee, with Seminole Casino's "Balloons over Paradise" 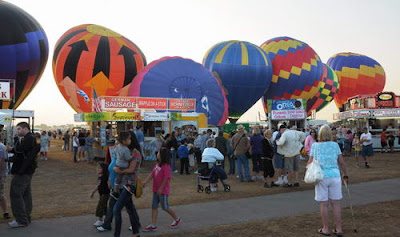 I did the unthinkable. So did hundreds of others. Excited over the prospect of seeing 30 balloons glow, then rise over Immokalee, we woke at 4:30 am, and got on the road from Naples at 5:00 a.m. to be on time for the 6:00 a.m. balloon "glow", that's when balloons are first filling with flame and hot air,  against a black sky.

We arrived at the airport entrance  at 5:50 am, early. Instead of  seeing a wonderful 6:00 am "glow", we and hundreds of others needlessly crawled along in a single file of cars, due to the poor preparation of the parking organizers. At 6:10 am, we parked the car, only to get on  another, very long line to take a bus to the balloon area. Our bus driver admitted  there were pathetically only "three or four" mid size buses to get hundreds of people to the site.  People were not happy. After 7 bus loads came and left, each with perhaps 25-35 passengers, we got on our bus. We finally got to the balloons after 6:40 and it was waay too light out for any "glow." Seminole Casino inadequate parking and transport set up took WAY too long at 50 minutes.  I told disappointed people to underexpose their photos  by f 1.5 stops, to make photos look much darker than it was-see below, with some Photoshop-type adjustments! 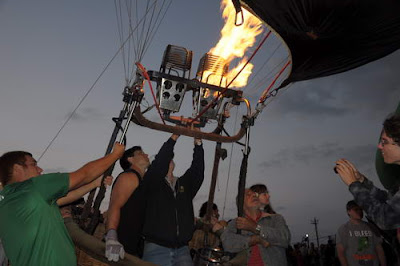 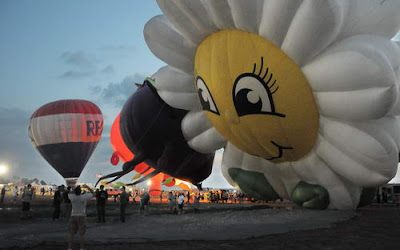 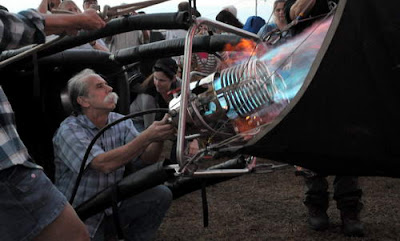 It was nice to be walking among the 12 balloons that did partially or completely inflate to see the fiery process, as flat blobs of colorful gossamer fabric  rose to become 60 to 100 foot tall balloons!. 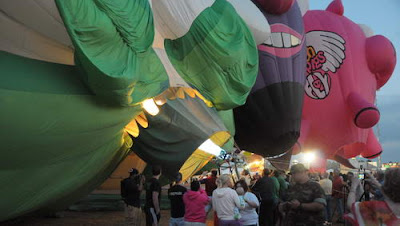 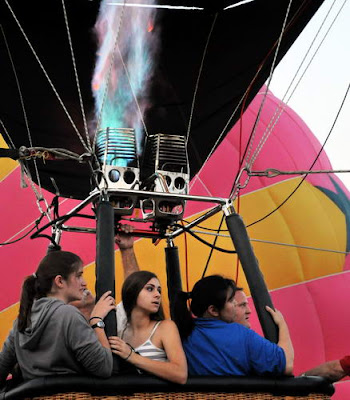 Alas, the wind was just over 9 knots, and NO balloons took off. Better to be safe than sorry for the balloonists.
The balloons were deflated and packed up, and so followed the crowds!
We had a delicious croissant filled with steak, cheese and egg for $5 at one booth. Others had mimosas while seated. 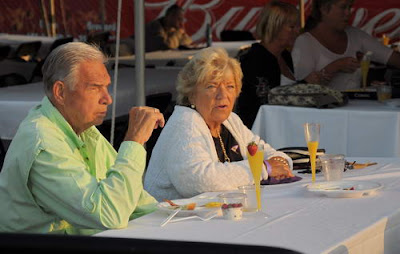 Only Fat Tortillas and another food truck were open then. 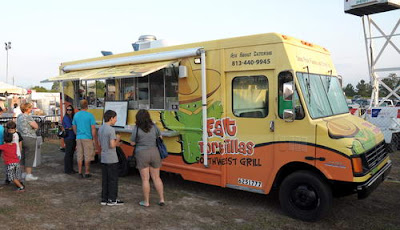 If more food trucks were there at 6:30, instead of coming later,  they'd have done a killer breakfast business! It's a long day for a food truck, and one can only bring enough food for so many folks, so they are wise to stagger their times/meals. The food trucks' gourmet quality delights alone are really worth a trip to Immokalee for a food lover. Had we stayed till lunch or dinner, we could have sampled 6 trucks's foods. 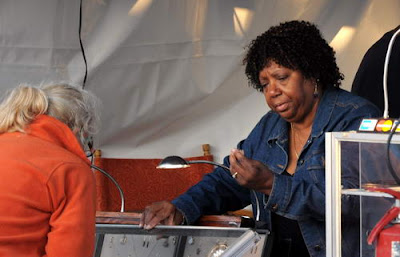 We strolled among the rows of  vendor booths-many sites were unoccupied-less than half bothered to be there at 8:30 a.m.. 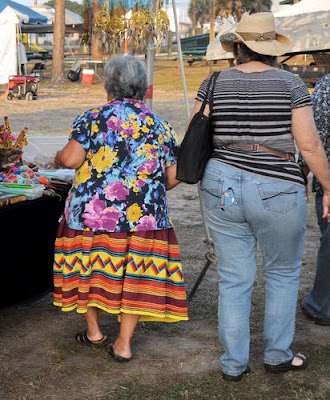 We, and most of the people we talked to were bored at the lack of shopping at the empty stalls,  and decided to leave. Another jam for to wait for the too- few buses ensued! One woman with the festival asked people "Why are you leaving now?"  Well...lack of preparation on the festival organizer's part and  absent vendors, that's why. We were so disappointed at the festival's poor planning that we forgot to go in the Seminole Casino on the way back to Naples; . 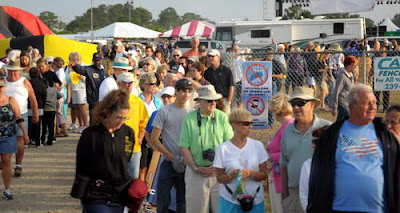 Maybe next time the Seminole Casino organizers will  spend the money from the $5 parking fee and hire six to eight additional buses, and truly  organize parking to speed it up. More vendors need to wake up and be there when customers are hungry for breakfast. It's a first time event for everything, people learn from boo-boos, and things should improve. If you have a terrific advertising campaign, be prepared for a great crowd.

Wendy went back at sunset, and reported that "The evening glow was also a bust .. No glow.
One or 2 balloons made attempts to go up and then they came down and got packed up and back into the trucks." Oh well....
I give the Casino great credit for the idea, and I look forward to coming back to an improved "Balloons over Paradise" later!
Posted by Ivan Seligman at 5:54 PM