Sous Vide or not Sous Vide…There’s No Question for Me!


I’ve been reading for over 20 years  about the sous vide cooking technique, and decided that when a sous vide machine dropped below $200, I  would buy one.  Sous vide (pronounced “soo-veed”) means “under vacuum” in French, and is the way to cook things pretty much to the same degree of doneness from the core to the surface. French chefs started using the technique during the 1970’s. Food is sealed in a thick- walled plastic bag under vacuum. It can be cooked at lower temperatures than usually used, and kept at these temperatures for hours to  even days. Temperatures of 131 degrees and higher are sufficiently high to kill bacteria in safely prepared food. The key is to keep the temperature at a precise point via the "trinity" of a heater, temperature sensor, and a device to circulate the heated water around the bagged food. You are poaching the food well under the boiling point, so food does not get overcooked. The only drawback is that at these temperatures, no surface browning, or Maillard reaction takes place to give a crispness or crust. Solution-pan sear it or grill it briefly after sous vide, to give the usual seared taste. Until recently, water baths were scientific grade devices for around a thousand dollars, then Sous Vide Supreme made just a water bath for a pricey $430+, but it sadly lacked a water circulator. That's as useless as a rowboat without oars, as you need a circulater for the water to avoid having hot and cold spots in the Supreme's stagnant water bath. Next!
Now, competition has heated up, ahem, with Anova and several others making heater/water circulators for $200. Don't pay more. All you add is an 8” tall container for the Anova (less height for others) water, and vacuum-bagged food. The food is essentially pasteurized at 131-135 degrees or higher after 4 hours. When it is promptly refrigerated, food tastes fresh for days after cooking.

I’ve tasted food prepared professionally by sous vide, and was amazed at the desired uniformity of the degree of doneness throughout the food, from surfaces to center, stem to root, and fat to bone.  Rather than steam or poach fish, or grill or pan sear steaks as I've happily done for decades,  I decided to  spring for an Anova Immersion Circulator for $199 plus $15 shipping. Upon the Anova’s arrival, I cooked a steak at 135 degrees to make it medium rare. I was influenced by watching innovative Executive Chef Domenico Bosco of Kitchen41.com’s  technique. He crafts dozens of orders a day for both takeout meals and in house lunch and dinner dining, and can barely keep up with the demand for his delicious Mediterranean-healthy food!
All is fresh, locally sourced and organic when possible, and that's 95% of the time. Well worth a visit, a second visit, and another...! 2500 Tamiami Trail North, Naples, 239-263-8009,
http://kitchen41.com/ 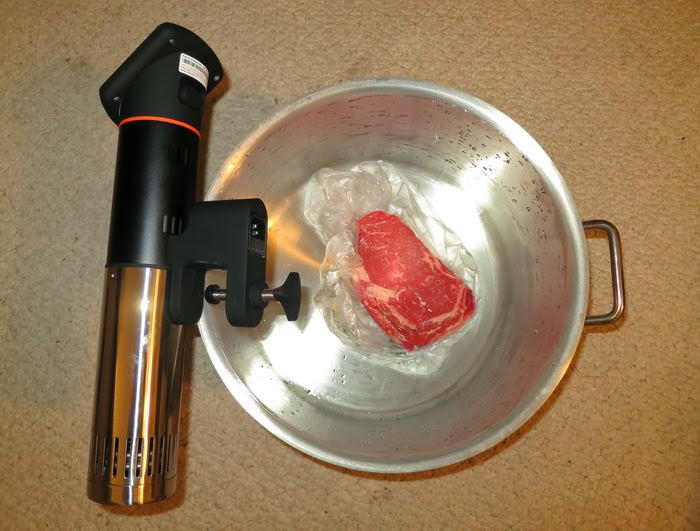 Vacuum sealing your food? Huh?  I’ve been cooking, chilling, then freezing all sorts of things for years in Foodsaver brand vacuum sealers that I bought at Goodwill Industry and other thrift stores for $10-$15. They retail for $50 to $200. Food can stay tasty for months to years when vacuum sealed, as things are less likely to turn rancid or get freezer burn in the absence of oxygen. That's why freezing in Baggies, Ziplocks, tin foil, etc doesn't keep food fresh for long!  As with canning, simple cooking techniques must be taken to avoid botulism spore growth in a relatively anaerobic setting.

I bought a one pound, one inch thick nicely marbled steak that I vacuum sealed,  then let sit for 30” till it was closer to room, or ambient temperature.While that really helps for grilling or searing proteins, I can probably skip that step in the future with sous vide cookery.

I clamped the solid 15" tall Anova device to my 8” tall large "spaghetti"  pot, then added warm water to kick start the cooking process. The device is easy to use, professionally constructed by clever engineers, and easy to clean. Guys, you can get by without reading the manual! Plug it optimally into a ground fault circuit  interrupter (GFCI) - protected kitchen outlet. Then select Centigrade or Fahrenheit, set temperature and cooking time on its large display face, and press start.  That's it! In less than 20”, the Anova heated the water bath from 102 to the target 135 degrees, and kept it there. 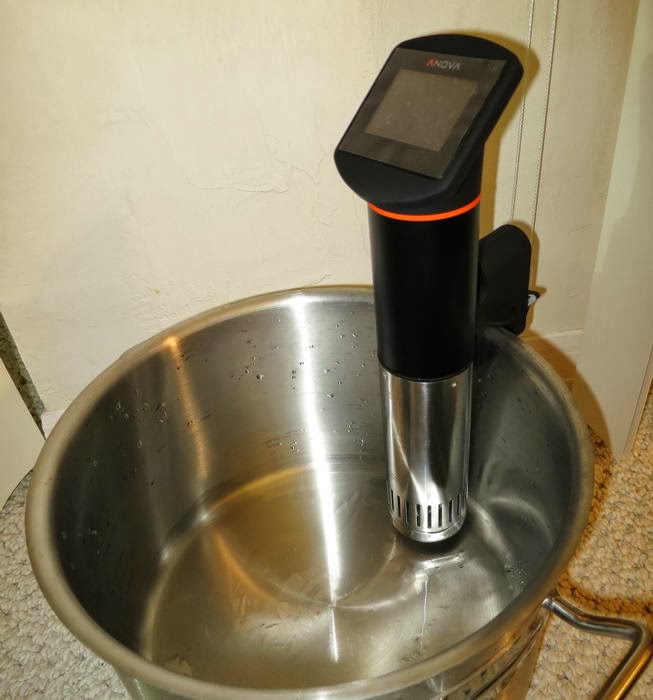 I plopped in the vacuum-bagged steak enhanced with salt and pepper, made sure to cover the water bath to avoid evaporation, set the timer for 1’ 15” at 135 degrees, and wandered off till the quietly purring Anova beeped that time was up, and demurely turned itself off. 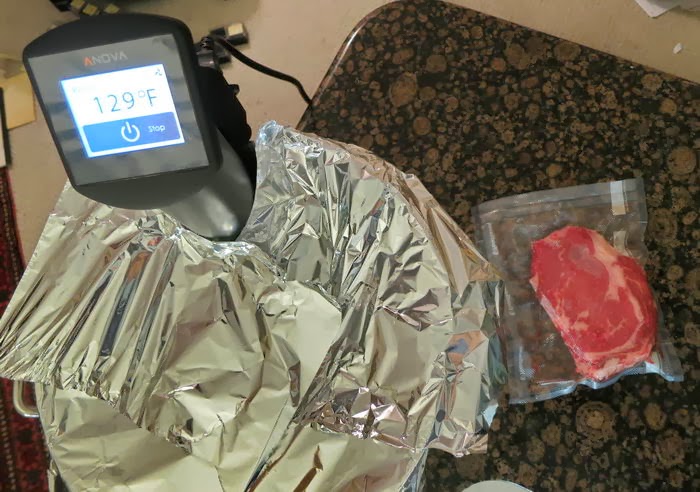 The steak had a beautiful medium-rare interior, with a pasty-looking exterior…just as expected. 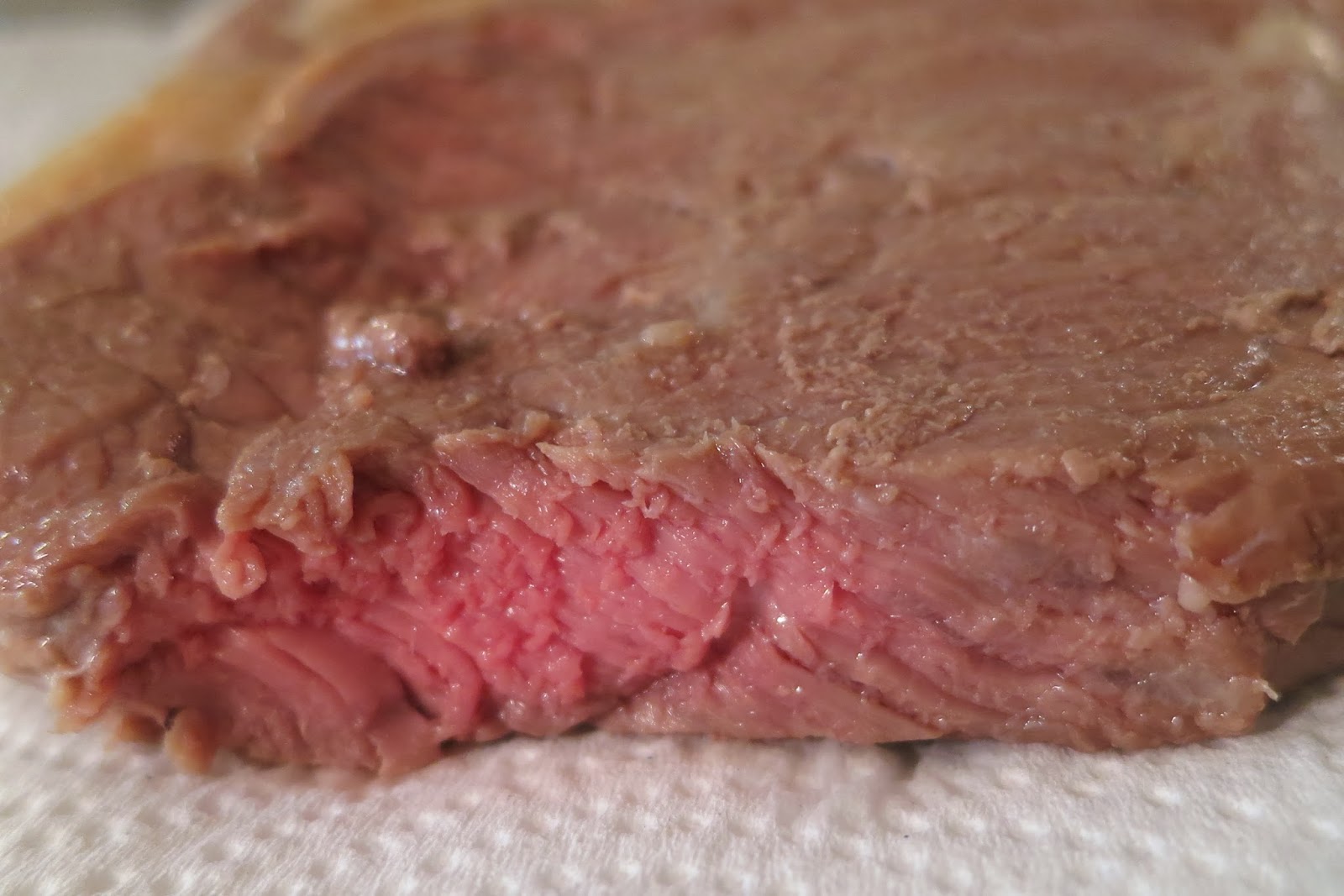 The steak yielded 3 tablespoons of liquid which I later reduced with red wine and garlic.
I heated a pan on the range top to medium high, added canola oil, then seared both sides of the steak for a minute or so on each side to really bring out some flavor. 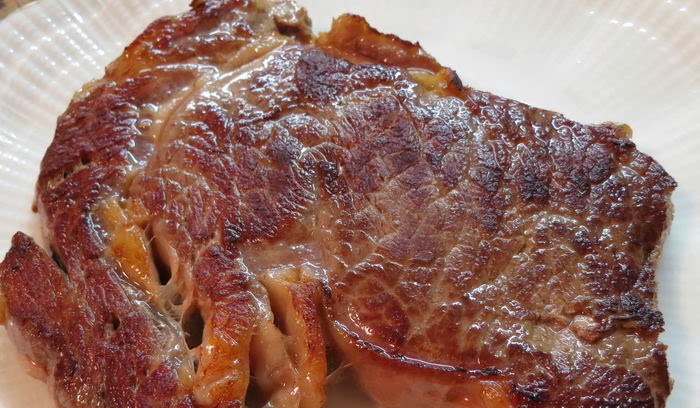 Now the steak’s exterior looked right, and the interior stayed a uniform medium-rare.
Taste test?  Wow, sooo very tender, juicy and delicious!
Next time, I'll heat up the grill to 450 degrees, toss in some water-soaked mesquite chips, and try that for a different finish. Hmmm... perhaps cooking short ribs for hours in BBQ sauce may come first...who knows?

Is this $200 device, with ~$50 vacuum sealer and water bath for your daily cooking?
Probably not, as most home cooks cook just fine with time honored techniques. This is for “foodie”  home cooks- those that want to try various aspects of “molecular gastronomy” with dishes that are optimally prepared at precise temperatures. It’s a small percentage of restaurant chefs that need or want this…till they try it! It’s great for preparing multiple portions of food at a precise temperature, then searing, or chilling till later needed, and quickly reheating. The water bath setup takes up a bit of counter space with a few gallons of water in the bath-it's not too moveable on a daily basis to put away, drag out, and fill again. While it's quicker steaming some veggies and fish, sous vide is excellent for precise cooking of fish, meats and veggies.

I sometimes cook with other cooks, preparing six course meals for 6 to 24 people at charity benefit dinners. Sous vide is a great way to “prep” or cook food ahead of time for multiple people, then just reheat, sear and sauce just before serving. 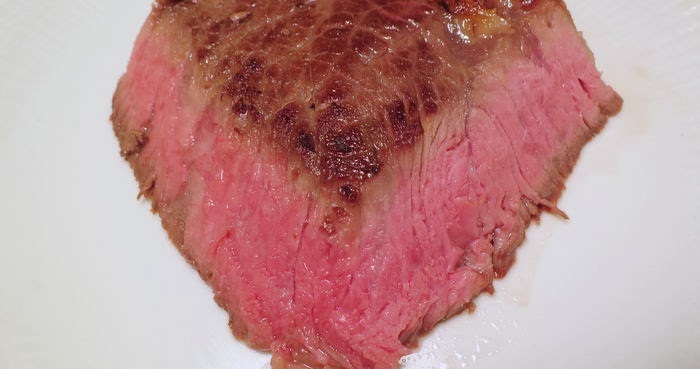 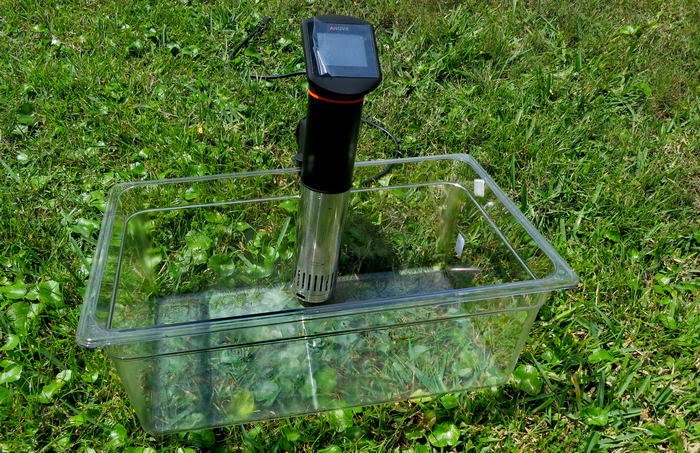 I didn't like not being able to see the food being cooked in the steel pot, so I ditched the steel pot, and  bought a clear lexan-type storage container for ~$19 plus tax at Williams-Sonoma.  Restaurant supply stores have loads of these for food storage..Any one want to try cooking verdant fields of dollarweed?
Posted by Ivan Seligman at 11:28 PM

Love you are back. I'm in town for a second week this season thur thru thur. Definitely going to hit up Reuben's, a bbq-comffort food place we had a great lunch (really good brisket and pork ribs) in Feb.

If you prepare meat a head of time, how do you reheat it.
Won't reheating cook the meat more?

You just take it out of the refrigerator and plunk it back in the water bath at the desired temperature, say 135 degrees for medium rare meat. As long as it stays at that temperature, it does not cook it more to say medium, it stays at medium rare! that's the beauty of sous vide.

It doesn't overcook the meat or vegetables!

Now, If you were to reheat it in an oven at say 200 to 300 degrees, it would cook more, as the meat's temperature would rise to 140 degrees, then 180 degrees etc. and it would overcook, from the outside in to the center, going from ,medium, to well to dried out!