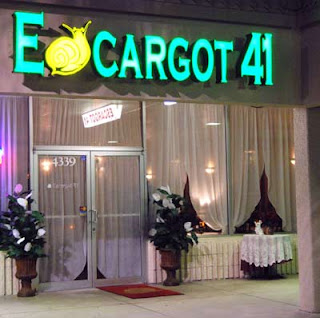 We were just plain lucky! We got a precious 6:30 pm Friday reservation, only two weeks in advance, for one of the fourteen tables at Naples-Fort Myers’ premier French restaurant, Escargot 41. Though housed in a small shopping center between Fresh Market and Kmart on the North Trail, the cars outside ranged from a Honda Accord to the newest Bentley, carrying their diners from Miami, Fort Myers, and even Ontario, Canada. 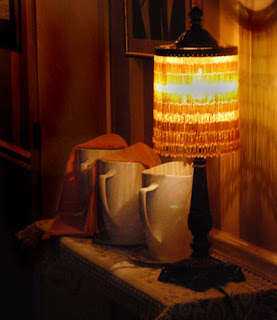 We entering across the red and gold carpet, were warmly greeted by Hostess-Owner Jackie, and escorted to our lace covered table. The décor is subdued, with attractive oil paintings on the walls. The beautiful colorful charger plates with a sea life motif set the tone for a piscatorial evening. Vaida was our highly competent server, and very helpfully suggested wines to accompany the appetizers, entrées and desserts.

We started with a Kir Royal ($7), a French Merlot (6.75) and French Chardonnay (6.45). The prices were easily half that of drinks at other restaurants in town, and the wine was a good 5 or 6 oz pour, again, larger than at nearly all other restaurants. The extensive and modestly priced wine list received the coveted Best of Award of Excellence from Wine Spectator Magazine.

Repeat patrons greeted Jackie with hugs, and visited other diners they spotted, across the room. This is clearly a local treasure. Few spandex-clad tourists will be walkins at this word-of-mouth delight. There's a several week wait for a Saturday night 7 pm spot. So far, there's been no need to advertise, or entice with 2-for-1 specials. While there's no formal dress code, the dress was still nice casual at 6:30, then as the later seatings arrived, dress tended toward jacket and tie for men.

An amuse bouche soon appeared; a delicate pale green asparagus soup served in the tiniest of demitasse cups-I only wished it was a regular soup offering; so creamy and rich, yet made without cream or milk. The hot French bread had a crisp crust and wonderfully light interior, and the unsalted butter was of the finest quality. Corners are not cut on quality or quantity.
We ordered one of Chef-Owner Patrick's superb appetizer creations, the evening's special; Escargot Champignon, with very large tender escargot, mushroom duxelles, tiny gnocchi, a delicious creamy sauce, and topped with a rich melted cheese (14). 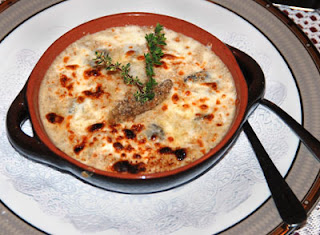 The French onion soup (6.95) was all you could ask for, and every drop of the rich broth and melted cheese topping quickly disappeared! 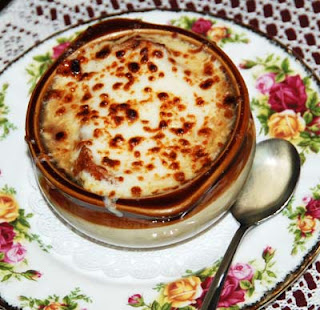 I’ve had fresh Pompano in Florida over forty times, and Vaida said this evening’s special version was delicious. Sautéed in butter, topped with sliced crispy almonds( (29), she was right! This was THE best Pompano I’d ever had, truly tender and moist beyond words! It was served on a heated beautiful plate, with a tower of white rice, and slightly crisp green beans bound in a hollowed zucchini round. The green beans were cooked in a delicately flavored broth; there was a subtle taste we couldn’t quite identify. An artfully piped dark crepe and a yellow edged sprig of tart green basil completed the plating. One table of New York regulars said it was every bit as good as Le Bernardin's fish. Chef Patrick prepares the pompano and the yellowtail snapper better than at any restaurant we've sampled in Florida, and we've tried many versions over the years.
.
Sautéed Pompano with Slivered Almonds 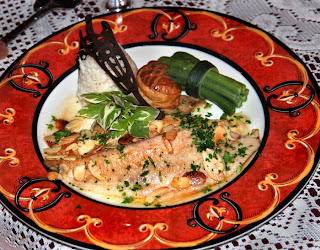 We also tried the Medallions of Veal, tender, served with apples and a Calvados based sauce. Also a winner! My guest said "I've never had veal as tender and as flavorful as this, everywhere elso it's mushy or too firm". Entree's are very reasonably priced, starting at $17.95, and most are in the $20's. My guest also admired the fine China, naming which hand painted Royal Doulton pattern was before us, and named the antique English tea cup and saucer gracing another table.
.
Medallions of Veal with Apples and Calvados 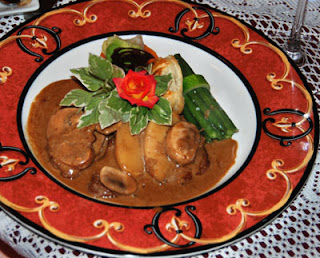 We were certainly well fed, with quite ample portions, a serving size not common at other French restaurants. Continuing the apple motif, we tried the apple tart à la mode (8.75) served in an individual low ramekin, with a flaky light puff pastry crust, and savored some of the finest caramelized apples we had in years. The vanilla ice cream, with a solid green sprig of mint, was a perfect counterpoint to the hot tart’s delicate spicing. 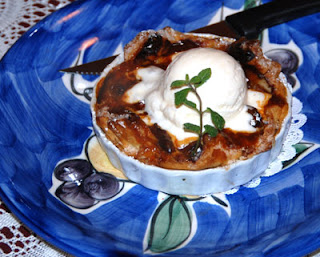 Other regulars recommended the raspberry soufflé (11.25), and it is worth waiting for. A delicate cloudlike tower of egg whites, majestically rising well above the ramekin's rim; it is accented by the tartness of the fresh raspberry sauce within. A silver server holds ample additional sauce at the ready. Unlike other restaurants during "the season", we are never rushed, and the service was attentive and leisurely. 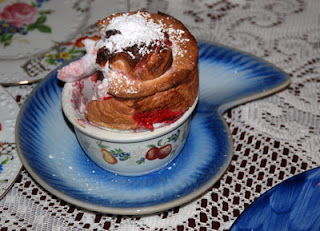 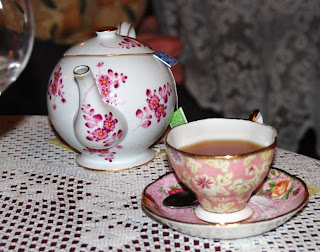