Wine Knows has shut its doors for good. Michael Bevacqua, previously the buyer for "In Good Spirits" for several years, started Wine Knows in the identical site on Naples US 41 (2609 Ninth Street North) barely a year ago, in January, 2007.

Today it's shuttered, after selling off the remaining inventory last week, and stunned customers have been commiserating over its loss. There was at most two weeks notice given to some regulars, and no email notice to many on his extensive customer list. For a growing cluster of wine aficionados, Wednesday and Friday evenings at Wine Knows were the spot to buy and try various wines. Many a good wine related or philosophical discussion took place over the beautiful bar Michael had crafted. He frequently donated wine and his time to benefit charity functions, and also paired wines for quite a few dinners with Chef Martin Murphy at Bonita's Robb and Stucky Casual Living Outdoor Showroom. The markup at Wine Knows was approximately 30%, quite reasonable for the marketplace. Michael put in a handicapped ready bathroom recently to accomodate serving food with wines, was considering having a Website, and all lights seemed "green" for growth. I do not know why it closed. Michael's many friends wish him all the best in his next venture. 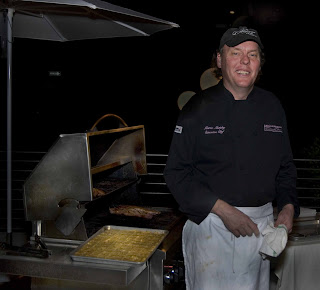 Robb & Stucky Casual Living Outdoor showroom's Chef Martin Murphy, formerly of Fort Myers' Blue Pepper, had raised the bar for SW Florida cuisine 3 years ago, when he started at the R&S showroom (employed by Creative Dining Services) in Bonita Springs. He quickly built a fine reputation and a successful venue. He served exqusitely fresh private and public lunches and dinners to small corporate groups, with almost no repetition, earning numerous repeat customers. He'd have a lunch cooking session for 20 people, and then cook several courses with wine, for a large group in the evening.

He easily served groups of 250+ people, and hosted the Chaine des Rotisseurs, and the Susan B. Komen Foundation events. His friendly and instructive cooking classes were well attended; people used and then bought KitchenAid's sturdy wares. He used only the finest ingredients, and clearly explained what set them apart in taste. The consummate teacher, he freely shared his food sources and recipes, earning the respect of many. Chef Kristina San Fillipo, CIA graduate, shall continue his work at the Showroom.

Chef Murphy was selected to cook in the James Beard House, a very high honor among chefs. His family was in New Hampshire, and we knew it would be a matter of time before he rejoined them in four- seasoned Lyme, New Hampshire.

Robb and Stucky could have scheduled a wonderful, warm send off for Chef Murphy and a simultaneous welcome to Chef San Fillipo, with easily several hundred attending, charging $100 a ticket, and aided a charity. That would likely have brought additional free TV and newspaper publicity for R&S, as thousands have enjoyed cooking classes and dinners with Chef Murphy over the past 3 years, and would have loved to show him their appreciation. Next time, I guess.

Many diners and cooking students wish him well.

Posted by Ivan Seligman at 4:43 PM