﻿﻿﻿
﻿﻿﻿ Curator Jack O’Brien’s 2010 vision of bringing a sampling of Cuban artists’ art to Naples became a wonderful cultural reality in less than a year at Naples Art Association’s von Liebig Art Center. The controversial exhibit, open from March 12 to April 30, 2011, brings art and artists directly from Cuba, as well as art from Cuban-born artists who now live in the USA. The exhibit’s strength is its varied selection of high quality art work. Some pieces are bold and “primitive”, others are rich in allegory and palette work. “Cuban art” is not easy to pin down; the works are as uniquely creative as the artists. 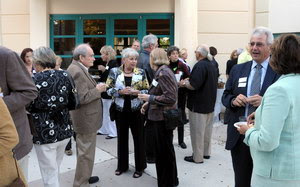 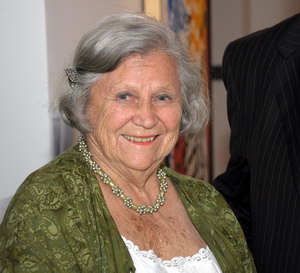 A who’s who of Naples art community was there, and more will attend throughout the course of the exhibition. I talked with art collector Olga Hirshorn, several of the Cuban artists, met Naples own artists with their work, and had a bonus reunion with three of my fellow art lovers who flew via American Airlines charter from Miami to Havana last June, with Curator Jack O’Brien, who was a “man with a plan.” Mr. O’Brien first selected art work he favored. Cuban artist and filmmaker Roberto Chile guided us to the artists’ galleries or homes to see their works. Artists are held in high regard in Cuba, almost like our athletes, movie stars and rock stars.

I don’t see a unified “American Art” in the USA. I don’t see a unifying “Cuban Art” among dozens of Cuban artists either. Viva la difference! (How does one say that in Spanish?) Gaudi-inspired José Fuster creating a mini city of “Fusterlandia” in Jaimanitas, outside Havana, with his colorful mosaics on his own and neighbors homes. In this kingdom, rum flows freely, and roosters and horses abound. 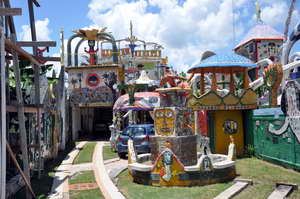 Alligators symbolize Cuba, and Cuba’s isolation, geographically as an island and politically as well, is evident in his and other’s art. Isolation, freedom, and music are common themes in Cuban art. 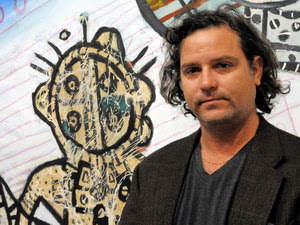 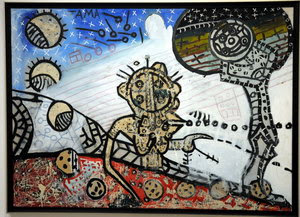 His images are like surreal dreams, “primitive,” “alien” and “refreshing” come to mind. He creates with oil paint on canvas, spray paints on brick walls, as well as carving images from a dark algae- covered pool deck with a high pressure water hose! 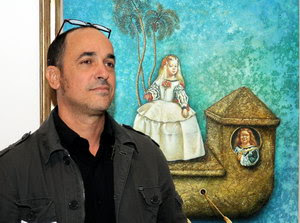 He juxtaposes s a Renaissance era portrait of a woman peeking out of a window on a fanciful barge, with a young girl in a white dress on “Infanta & Malecon.” 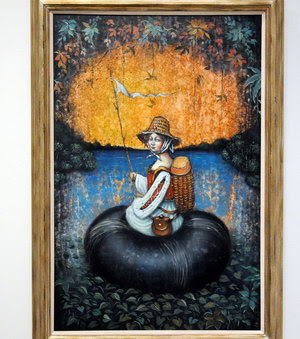 Another painting has a woman in Renaissance-era clothing and fishing gear perched on a large black inner tube. Hmmm. Your impressions are welcomed! 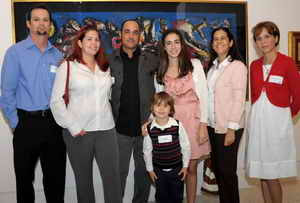 I met dynamic printmaker Eduardo Roca Salazar, known as “Choco,” as in “Chocolate,” in his large Havana studio in June of 2010. A big man with a 1000 watt smile, he favors uncluttered powerful images, and subdued to bold colors. 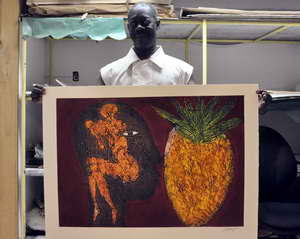 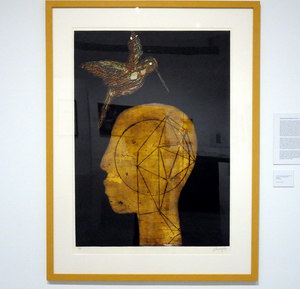 While he readily explains some of his prints’ images and symbolism, he also leaves plenty for your imagination.
Other artists include Humberto Castro with his hauntingly beautiful image of a young person adrift in a small boat, between two women on two different shores (below); 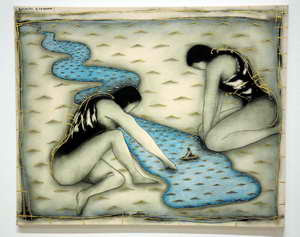 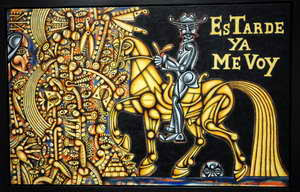 My parents used to go to Havana for a long weekend at Hotel Nacional, in the 1950’s. Their friends honeymooned there. 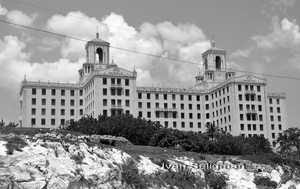 I stayed at the Hotel Nacional in 2010. The Hotel and many of the cars haven't changed in 50 years! 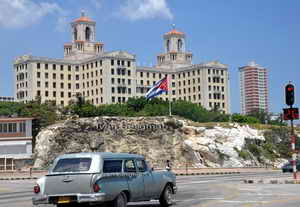 Amazing, authentic Cuban travel memorabilia from that period is also on display at the von Liebig, courtesy of Alejandro Nuñez, Heidi Rofles, and Elizabeth Black.

What’s controversial? Plenty! To many Cubans in South Florida, having any contact with Fidel Castro’s Cuba is blasphemy. To others, there’s a strong desire to connect with the people and artist of their former country, and talk with an actual artist. This exhibit is about the people, the artists of Cuba. I invite you to park politics at the door, come with an open mind, and see a new generation of Cuban artists’ art and symbolism. It’s fine art, and well worth a visit.

Posted by Ivan Seligman at 4:04 PM

Beautiful story and a great journey of friendship IVAN !
Gracias for the kindness and goodwill that you brought with you to Cuba . Your amigos are inviting you back.

See you about and very best regards, Parke