.
I went with friends to my second Roller Derby in Fort Myers, and had a great time! 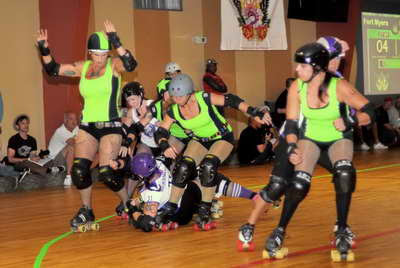 This is a fun family event, as the home team Palm City Punishers generally have home games the last Sunday of each month during the derby season. The girls on the team and their competitors are talented, tough, and give 150% of their all. The game and its scoring is fairly easy to understand-just ask the rabid fans to either side of you for the rules and maybe a few play by play explanations to get you started. Then buy  beer, pretzels, pizza or chicken nuggets and sit back and watch the mayhem unfold! It's as rough as ice hockey; roller derby is played with four wheeled skates. The Punishers opponents sometimes survive a match. Broken bones  prove this is not fake like wrestling! 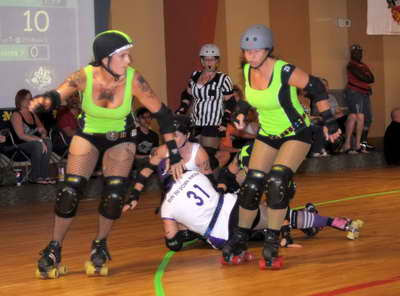 The "Jammer", one per team with a big star on her helmet, races round the track, with her three blockers and her pivot trying to protect her from getting smashed by the opposing team's aggressive blockers as both jammers circle around and go through the pack. Once the jammers have gone around the track, the scoring begins. They earn a point for each time they pass one of their competitors. Blockers send jammers and others crashing to the floor, or into spectators who place themselves on the "suicide line" front row seats. Despite padding for elbows, knees, head and teeth, bones  break and bruises are a badge of a bout well fought. A "pivot," one each per team with a fat stripe on her helmet, sets the pace.  Each jam lasts for 2 minutes, or until the lead jammer puts her hands on her hips to signal the end. Then another tendon-tearing, bone-breaking jam begins!﻿﻿﻿
﻿﻿﻿At this latest bout, the Fort Myers Palm City Punishers (green shirts)  beat their highly trained competitors, the Tampa Bay Bruise Crew, in a fierce brawling upset. It's amazing to watch Punishers like Anya Dixon #Colt 45, Jackscratchfever #23, Lil Miss Slambags, Serenity Storm and The Elexorcist #666 dish it out and take it. 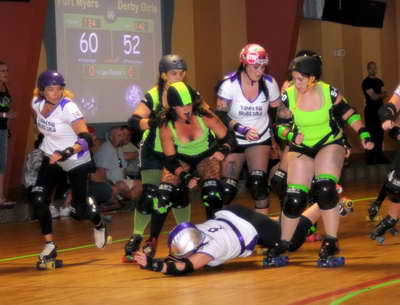 Tampa Bay's Gail Force #55 was a force to be reckoned with- she took more than her fair share of bruising abuse.  Others like Taz Maniac #7, Sassy Ash #277, and Stone Wall 73c ably put up a tough fight.
Plunk down just $10 and come see a match in Fort Myers! Bamboozles Skating & Event Center opens on a Sunday game day at 5:45 pm, and the game starts at 6:30 pm. Bring a folding chair for your seat, as seats are limited.
Upcoming games are:
6/26 Misdemeanors vs Thunder City Derby Sirens
7/31 Punishers vs Gainesville Roller Rebels
8/13 Brownie Bruisers vs Twisted Sisters
9/25 Punishers vs Bradentucky Bombers 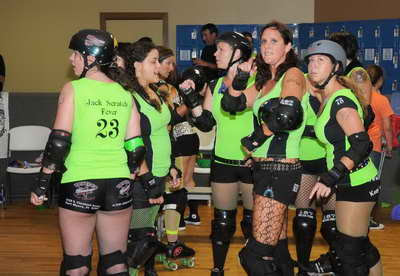 8/13 game has been changed to The Palm City Punishers VS The Tampa Bruise Crew. A rematch, should be exciting.

on 8/13/2011 this game has been changed to the rematch game of The Palm City Punishers VS The Tampa Bay Bruise Crew. should be a great rematch game.