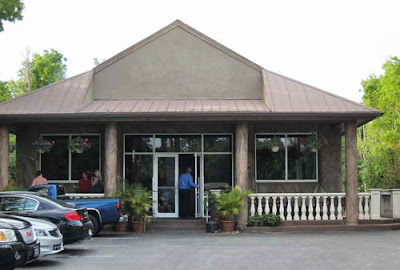 Chef/owner Robert Parks’ latest Twilight incarnation is one of the better spots on Sanibel Island, worth a drive for those from mainland Lee County to check out the cuisine. I met my friends there to have a chance to talk for a couple hours, because the restaurant advertises itself as “Intimate dining returns to Sanibel.”  While we enjoyed the food, the disappointingly excessive ambient noise level allowed about as little conversational intimacy as a popular sports bar! If you seek the advertised quiet "intimate dining"…look elsewhere, for now.
Robert Parks has been a dynamic culinary force on Sanibel since 1996. This current restaurant’s location is around the corner from the site of his first restaurant, Twilight Café at 751 Tarpon Bay Road, which was later occupied by Red Fish Blue Fish, Sweet Melissa’s and now Il Tesoro. Around1996, Robert started at Twilight Café, and became  the chef/owner in 2000, staying there until 2006. He left Sanibel to open the  short lived Rivals Sports Kitchen at Miramar Outlets in Estero. He returned to Sanibel in latter 2008, opening “The New” Twilight Café at 2761 West Gulf Drive at the former site of Riviera Restaurant and prior Nutmeg House. He moved  again- in November of 2010 opning this fourth venture, “Twilight Restaurant and Wine Bar”,  at  2430 Periwinkle Way, (the former site of Andrea’s Gourmet Market).  He placed the more casual and tourist oriented Stone Crab-a Shrimp and Seafood House at the former  Twilight’s 2761 West Gulf site. 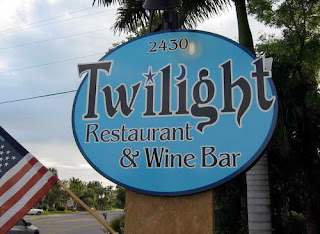 One can easily drive by the Twilight Restaurant & Wine Bar’s small, raised sign at night. There’s scant parking in front and more spots behind the restaurant in a gravel lot. Walk past the diners on the front porch, and enter the one story restaurant.  To the left of the dining room is the open kitchen with eight bar seats. A wall of noise hits you as you enter and remains throughout your meal, as sound loudly reverberates off the tall ceiling and uncarpeted floor. Twilight Restaurant is clearly one of the noisiest spots in SW Florida! Robert could easily drop the noise level by hanging inexpensive sound absorbent cloth from the ceiling. Outside of the vast improvement in noise reduction, comfort and ease of conversation, no one would complain.
We were quickly seated at our reserved table at 7 pm, and warmly greeted by Susan, our server. She quickly assessed our food preferences, asked if we wanted Sanibel’s finest water or bottled water, and was very helpful in steering us to dishes we might favor.  The 60 some seat restaurant was nearly filled at 7 pm on this Friday. Susan ably covered our table and others. I recommend you make reservations to sit in her section. 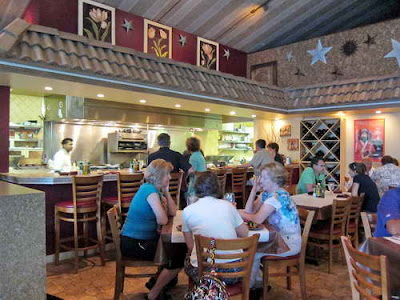 We placed our orders and selected a bottle of  2009 Byron Pinot Noir ($40) from Santa Barbara County’s Santa Maria Valley. Medium bodied, rich with berry flavors and balanced, it goes well with seafood and meat dishes. Recommended! 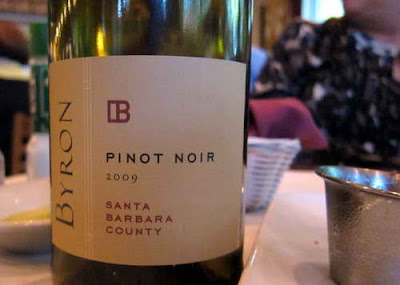 There’s a good variety of wines, with 37 reds by the bottle and seventeen by the glass, and a similar assortment of white wines. The reds range from $25 to $90 by bottle, and  $8-15 by glass, with good pour amounts. There’s Smoking Loon, Fetzer, Kendall Jackson, and Marques de Caceres at the lower priced end, with Groth, ZD and Silver Oak at the higher end.
Truly piping hot sliced bread arrived, accompanied by a large dollop of pesto in a dish of olive oil. Butter is also available. Don’t fill up on the delicious bread and pesto-save room for the ample portions to follow! 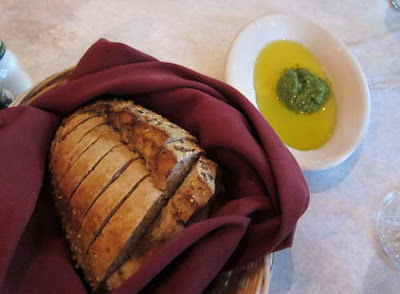 I’ve respected Chef Robert’s attention to diner’s allergies and dietary restrictions. There’s gluten free pasta and bread available, and vegan and vegetarian offerings.
The $15 Twilight Combo is a good way to sample three appetizers at once. Its pan seared two crab cakes are tasty, though without lumps of crab. There's clearly has crab within-ours appeared to be flecks of claw mixed with filler. It’s good, and a goodly portion for the price. Its lack of lumps clearly would not appeal to a lover of New England lump crab cakes. It’s not billed as lump crab meat, so it is accurately described. The order’s two coconut shrimp are a delight, with a tight, non-greasy crust enclosing a tender medium size shrimp. The star of the whole dish is the superb raspberry and citrus rind marmalade dipping sauce’s sweet and slightly tart tanginess! Robert would do well to bottle this ambrosia. 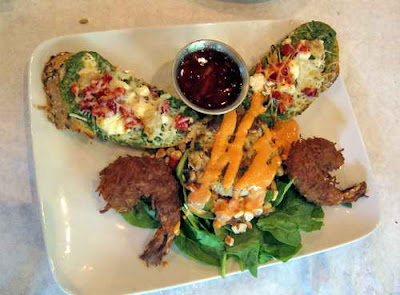 The two pieces of toasted focaccia bruschetta are nicely done. The crisp focaccia is topped with diced tomato, roasted garlic cloves and melted cheese. The corn salsa has crisp kernels of corn and a welcome mild chili-type heat. It’s a good deal for $15, and could be a full meal for some diners.
Susan suggested we also try the Goat cheese stuffed crab cakes with raspberry red pepper remoulade ($12).  This wonderfully crisped quintet  is delicious, warm and creamy! 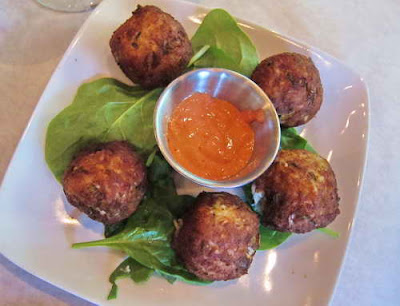 We enjoyed the crab cake's savory melted goat cheese center. The remoulade sauce is a must for every mouthful. We greatly preferred this crab cake variation over the prior crab cakes. Recommended!
Other  appetizers include: Caesar salad ($8), sesame crusted seared rate tuna on a bed of seaweed salad (10, other salads, and a roasted tomato bisque soup for $8.
The meal’s pacing was good, with one glitch.
Our three main courses were served “Auction style.” They arrived not with Susan, but with other servers in a hodgepodge fashion, rather than easily coming to each diner as ordered. It’s not appropriate when three  entree plates have to be “auctioned off” as the server shouts over the noise, “Who gets the tuna?,”  “Who ordered the lamb chops,” and finally “Aha, you must get the veal chop!” Professional restaurants have for decades set a designated “#1 spot” at, say, the north end of each table, and chairs/places are then numbered clockwise from there. Thus the order taker notes the meal and the precise person/chair, and any other server can then accurately deliver it. I hope this is not typical service, and prefer to believe it was a service glitch that won’t happen too often.
Each of the main plates/entrees comes with a choice of grilled broccoli, creamy cauliflower or spaghetti squash. I like that under each dish’s description there is a suggested wine.
My Grilled center cut veal chop was well worth  $32! The large chop arrived wonderfully seared, medium rare as ordered, and it was a very good quality of veal. I savored every bite, alone or nicely accented with the sweet currant demi glaze (sp). 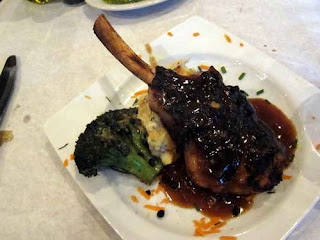 The accompanying roasted corn and crawfish mashed potatoes are a taste treat as one discovers each tidbit hidden in the warm mashed potatoes. I enjoyed the signature oak-grilled broccoli, which is first marinated in a blend of red onion, soy sauce vegetable oil and red wine vinegar. It’s then briefly grilled till nicely crisped in some spots. Highly recommended.
Many spots offer their version of seared tuna to cash in on the demand for seared tuna. Twilight’s seared tuna excels because it’s a better quality of  tuna than most others offer (By the way, many claim a  “sushi grade” tuna, which is not a recognized USDA  “grade” or standard at all. Smile when restaurants make this empty claim.) Twilight Restaurant’s dish starts with a generous portion of tuna that’s higher quality than most “sushi grade”, coats it with crisp white and black sesame seeds, and briefly sears it. It’s served with wilted bok choy in a sesame coconut sauce. 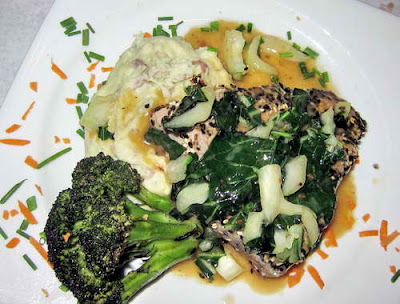 This is nicely accented by the mildly-hot wasabi mashed potatoes. The whole dish is harmonious in its Japanese-inspired ingredients, tastes and textures. Recommended.
The $26 Grilled New Zealand rack of lamb’s chops are individually small as lamb should be. the combined Frenched eight rib rack supplies a generous overall portion of tender, flavorful and properly grilled ribs. 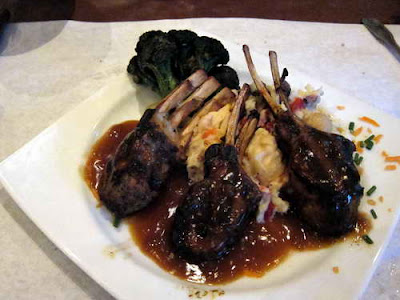 The port wine demi glaze (aka demi glace) is a great match for the rack. This dish is nicely accompanied with garlic clove and red pepper mashed potatoes. You’ll not get a better rack of lamb for $26! Highly recommended.
Other mains include the Pan seared filet of beef with goat cheese and basil mashed potatoes ($27), Grilled diver scallops over tangerine linguine (24), Seafood pasta with spinach (24), and  Paella for $24. You can “Create your own Entrée” for $22-24, choosing from eight “proteins”, four cooking styles, over a dozen starches and nine sauces.
Twilight also has a “Build your own Pasta” section. For $17.95, choose a pasta type from five offered, two vegetable  ingredients from a choice of nine, and a sauce from six. Want more? For $2-3 per ingredient, you can also add shrimp, mussels, scallops, grouper, sausage or chicken! Don’t come yapping to me, whining that you can’t find anything you like here!
Although there’s a decent selection of desserts like Key lime pie, we made “all gone” of our $8 Red Velvet Cake! It’s a rich cake with cream cheese-coconut frosting, topped with a drizzle of caramel sauce and candied pecans. 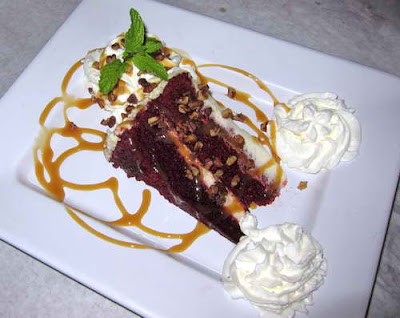 The three dollops of sweet whipped cream, one topped with a mint sprig, are a welcome touch to this Southern classic cake.
Pros:
Delicious food and sauces
A great variety of "create your entree" dishes
A vegetarian- friendly variety of choices
Gluten-free and other diet/allergy safe offerings
Decent wine variety
Owner may be on site at this or his other restaurant
Cons:
Very loud noise level and lack of sound absorption.. Conversation is difficult to hear over the din.
“Auction-style” meal service” – I do not believe this is the norm.
.
The noise level does precludes "intimate dining’s" conversation. I overheard shouted parts of others’ conversations that I did not need to hear. Noise-averse diners should reserve a table at a time to best avoid the loudest 6:30-8:30 pm noise levels, or come during the summer lull.
Quieter nearby spots that do allow intimate dining include Sweet Melissa’s, Il Tesoro,  Mad Hatter and the romantic Thistle Lodge.
Overall, the delicious food and other “pro’s” may ace out the "con" of  loud noise level for some. I enjoyed and heartily recommend trying Twilight Restaurant's unique, delicious cuisine -just wisely choose the time to visit.
2430 Periwinkle Way, Sanibel, 472-8818,  www.twilightonsanibel.com
Posted by Ivan Seligman at 10:14 PM